Mallozzi, named after Zonfrillo’s great-grandmother, was located at 279 Rundle Street, just down the street from his award-winning fine-dining Restaurant Orana and the more casual Bistro Blackwood.

When it opened in December last year, it was spruiked as a Vino e Spuntino bar (wine and snack bar) launched by the chef in partnership with Bistro Blackwood and Restaurant Orana sommelier Shaun Lau.

The two-level venue was given a new interior fit-out in just four weeks and focussed on what were described as “small portions of the type of Italian grazing food Jock grew up on”, including salumi, cheese, snacks and pasta. 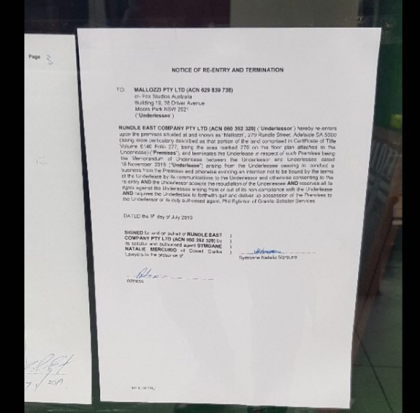 However, a series of notices posted on the door of Mallozzi this month on behalf of landlord the Rundle East Company (a division of the Maras Group) claimed the leaseholder, named as Mallozzi Pty Ltd, was in arrears for $8708 rent. The notices included a “Warrant to distrain”, an inventory of stock, and a “Notice of re-entry and termination”.

Although the notices were gone this morning, the “Notice of re-entry” (left) was posted on Instagram yesterday by The Australian restaurant critic John Lethlean with the comment: “All over at Bar Mallozzi in Adelaide for @zonfrillo.”

In reply, @zonfrillo posted: “Closed weeks ago but yes, sadly it’s most certainly over.”

The closure of Mallozzi follows a string of other changes in the Rundle Street precinct in recent times, including the demise of chocolate cafés Chocolat and Max Brenner (with the latter replaced in January by St Louis House of Fine Ice Cream and Dessert). Around the corner in Union Street, Burger Theory also closed last month, to be replaced this month by new burger joint Hello Harry, while dessert café San Churro closed and then reopened within a couple of months with new owners.

Mallozzi occupied the space which previously housed Spanish restaurant and bar Iberia, which opened in early 2017 and closed around this time last year.