He wrote that those within the ring can transform from mere mortals into “Gods”.

Dean Brady, a professional wrestler in Adelaide’s independent wrestling scene, believes in this power too.

It wasn’t about the wrestlers, inferred Brady, but what wrestling means.

So, what does wrestling mean? What is the stuff of these quasi-Gods? And how does a wrestler in South Australia become a Wrestler, like Hulk Hogan or The Undertaker?

I went to the nightclub HQ at 8pm on a Friday to find out.

It was the SUPERCLASH2. The nightclub traded its dance-floor for a boxing ring and its dancers for punching pundits. Instead of the 200 or so people moving, kids, families and grandparents watched the elevated arena with their iPhones ready.

Someone wailed over the sound system, “Are you ready to riot?” and people ran to chairs like the ground was lava.

Four wrestlers – Kit Condor, James Kray, Cadie Tré and Tony Toro – emerged from the darkness with their own outrageous theme songs and personalities. They wrestled in a blur, with their moves accented by thumps, slaps, leap-frogging and bad insults.

In vulnerable costumes that exposed large parts of their hairless bodies, the men commanded the space. With pomp, flair and dramatic expressions, the combatants were divided into heels (villains) and babyfaces (heroes).

But despite their characters’ designated arc, these men had the scope to create their own point of difference. 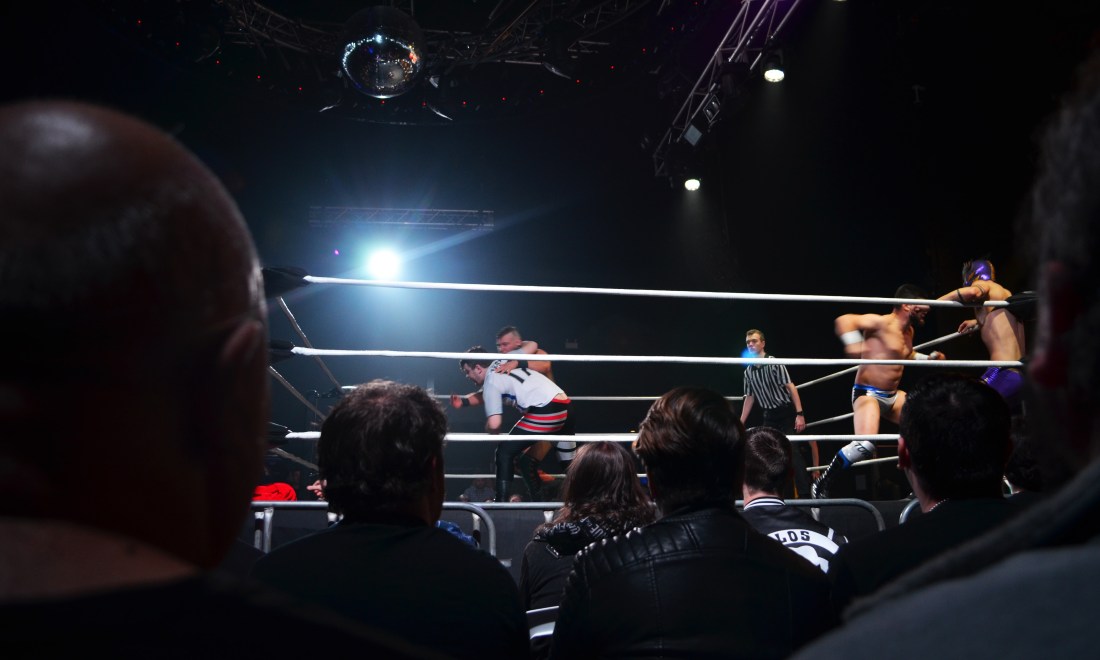 Barthes said: “Wrestling is not a sport, it is a spectacle.” Here is Cadie Tré, James Kray, Tony Toro and Kit Condor giving it their all at HQ.

Tré, a wrestler who wears a dog collar and is known for “biting” his opponents, emerged victorious over his playmates while baring his teeth.

Roland Barthes has a reason for why this works, these archetypes. He says more is more.

“The virtue of all-in wrestling is that it is the spectacle of excess,” he says.

After the men left the stage and other wrestlers revolved, Dean Brady was up.

A huge dude and quintessential “babyface”, Brady wrestled against the leather-hot panted veteran Matt Hayter who arrogantly told the referee “he’s stretching” whenever Brady tried to land a punch.

Brady, salty over the grandstanding, spat to Hayter, “your pecs aren’t even that big,” before devastatingly losing. Victorious, Hayter took to the ropes to flex his muscles while blowing kisses into the crowd – a classic move.

Wrestling is an underdog sport in South Australia. Nowadays, locally-made matches can only be found on YouTube or watched live in a gym, ethnic hall or nightclub, but this wasn’t always the case.

Wrestling had more broadcasting power in 1960s thanks to Australia’s first wrestling company, World Championship Wrestling, which emerged in 1964 in Melbourne. The club’s weekly matches sometimes clocked-in more than 6500 punters and the TV episodes attracted a dedicated audience.

Kids were wearing T-shirts with a wrestler’s face on them; Mario Milano and Killer Kowalski were household names.

That was the heyday of wrestling but the boom eventually went bust.

In 1978, Nine Network pushed wrestling aside to give the weekend timeslot to new pursuits, such as World Series Cricket. The North American World Wrestling Federation attempted to fill this void through programming and tours to Australia, but fans were left scrambling for a taste of their sport, especially in South Australia, because the physical matches never hit Adelaide.

American-based pro wrestling took off on television in the 1980s but, again, live-action was rare for local fans.

As a result of this physical gap in the market, there are now independent, less commercial, wrestling communities in Adelaide looking to settle the score.

Riot City Wrestling is one of four local “promotions” that trains wrestlers and stages performances in Adelaide.

Together, they’re creating the next generation of Australian wrestlers. 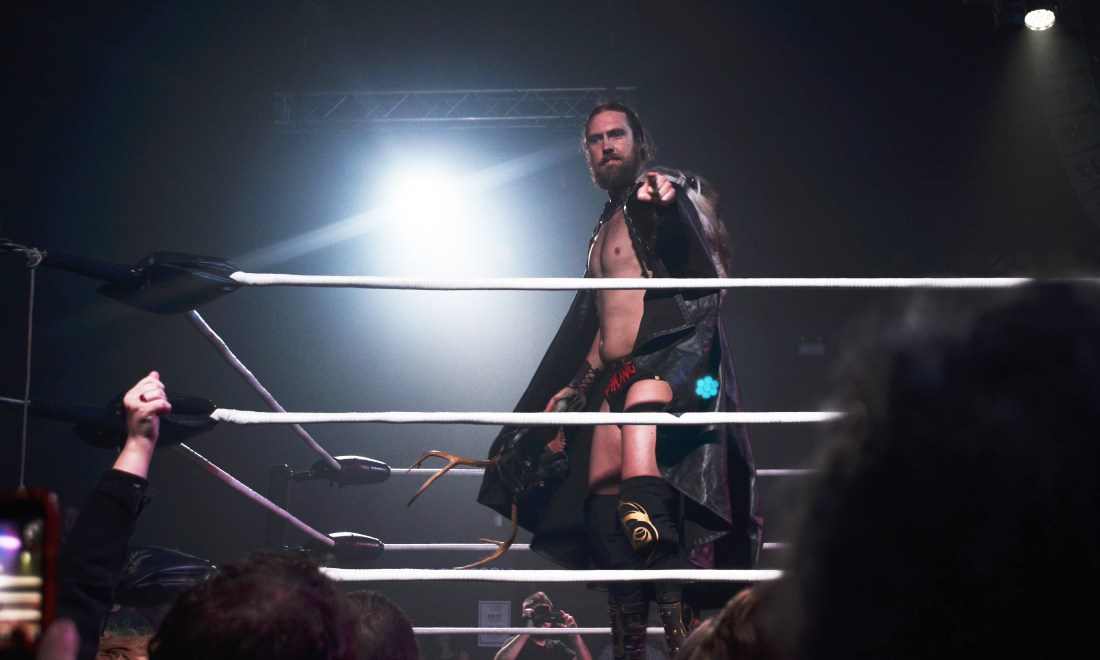 During this match Grimm, also known at Matt “Matty” Basso, one of the brothers that co-founded Riot City Wrestling, was called a “Christmas ornament” as a (questionable) insult. 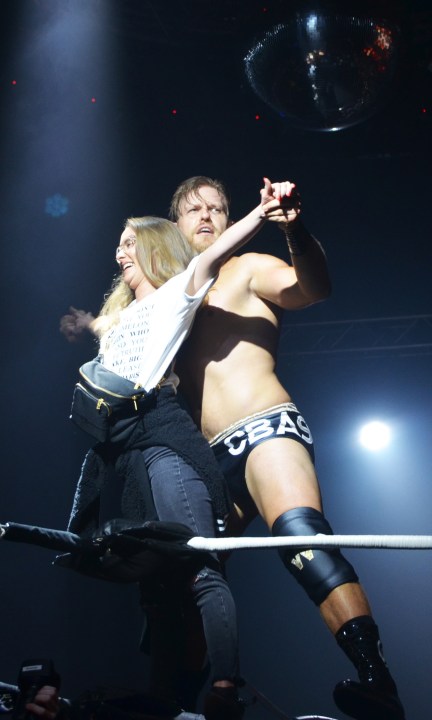 Chris Basso, Matty’s brother, doing a “Titanic Move” at the SUPERCLASH2 that brought many to tears.

Established in 2006 by brothers Matt and Chris Basso, RCW is a place where plucky performers learn how to nail a spot (a set of moves), develop their character and costumes, and grow their role in the wrestling community.

Matty Basso told me all his wrestlers started in front of the TV.

“They were all couch potatoes who wanted to be like Hulk Hogan or Triple H, the guys they saw on TV,” he said.

Matty has taken some of these dreamers from trainees learning how to do forward rolls to glistening stars “running the ropes” in the big time.

RCW has kicked off the career for some of Australia’s next-gen pro wrestlers: 23-year-old Rhea Ripley signed with World Wrestling Entertainment (WWE) in 2017 and 31-year-old Jonah Rock joined WWE a year later.

But before Ripley and Rock got there, they also started out wrestling at matches like the SUPERCLASH2.

Back at HQ, two female wrestlers square up.

Melbourne export Indi Hartwell is wrestling against the small but staunch Adelaidean Miki Fortune. As an old man growls, “smack her Miki,” a chorus of young teenaged girls chant, “Miki’s gonna kill you”.

Miki wins, and Hartwell throws some sad eyes over a lost belt.

In an interview later at the merchandise table, Indi Hartwell told me “wrestling is a suspended reality” because when you’re in the ring, you’re in a universe with no rules.

But she wanted me to make sure I knew her sweat, blood and tears were definitely real. She was also adamant that the Riot City Wrestling family in Adelaide is real too.

Later, I called up Matty Basso wondering what it would take to become someone like Hartwell, or Brady – a God, like Barthes said.

We were both surprised when he said, “yes.”

Running the Ropes part II will come next week, where this reporter learns to military roll, what the “business of the match is,” and why these people are willing to take a belting for a belt. 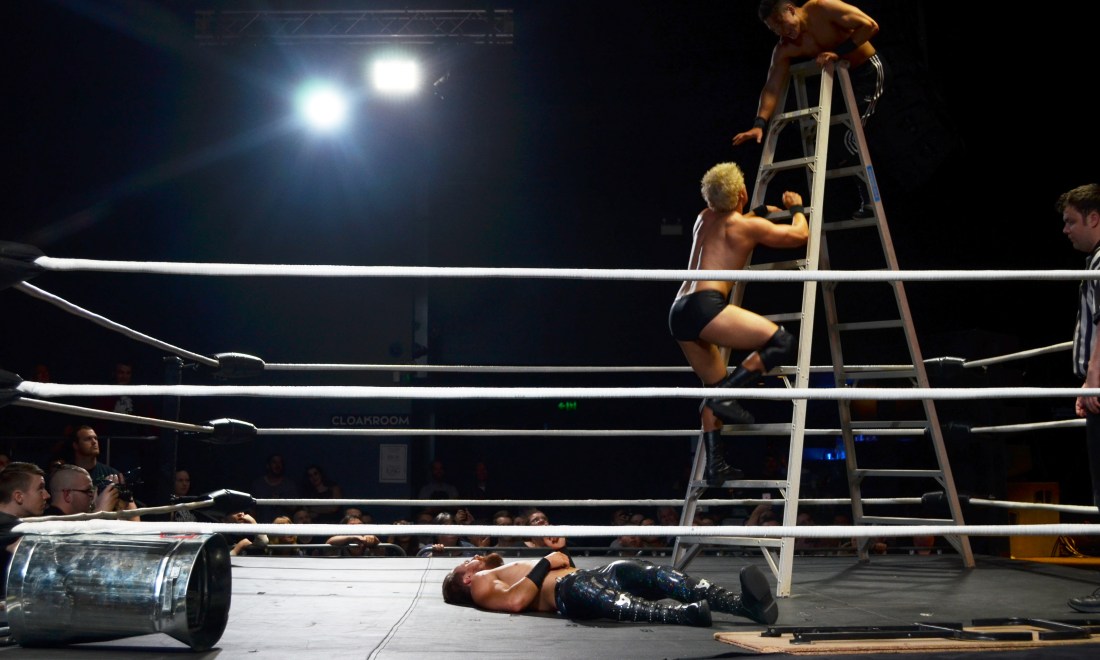 Fun (painful) things for me to look forward to.