The online petition calls on the Marshall Government to ensure the survival of the famous music venue, which is on the SA Heritage List and was inducted into the SA Music Hall of Fame last year.

Fears for the venue’s future flared after Heritage and acting Transport Minister David Speirs said yesterday he could not guarantee its future in the multi-billion dollar upgrade of South Road between Tonsley and the Torrens.

The massive project, expected to begin in 2022 and finish by 2028, will see hundreds of properties lining South Road compulsorily acquired and demolished.

Speirs today reaffirmed that the future of Thebarton Theatre could not be guaranteed – but emphasised the government was aware of its heritage value.

“This is a very premature discussion and it’s far too early to speculate about which properties may be impacted by the North-South Corridor project,” he said.

“There is considerable planning and design works to be undertaken, once a preferred option is selected.

“The Thebarton Theatre is a cultural icon and the design for this project will consider many factors, including Local and State heritage listed properties.”

On July 29 last year, Premier Steven Marshall was a guest of honour at the induction and concert held at the venue to mark its 90th birthday. 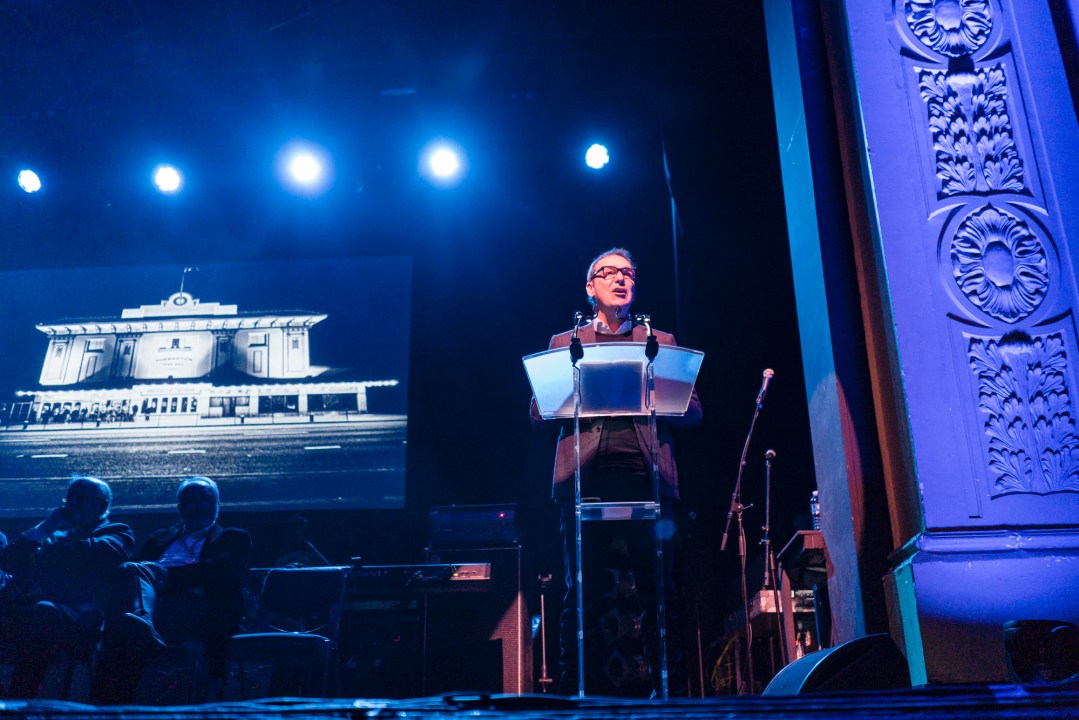 The government is waiting for a business case to be delivered before it makes a decision on the best way to proceed, which essentially comes down to tunnel or surface options.

What is not clear is why the Government hasn’t moved to allay concerns over the future of heritage sites along the affected route, given that tunnels or grade separations have already been proposed as two of the three available options, and the least disruptive – particularly around areas such as the Henley Beach Rd/South Rd intersection where the theatre is located.

A DPTI scoping study from 2015 showed tunnels were then considered the best option to lessen the upgrade’s impact in certain areas, including that major junction.

In February, the Government said it was considering two separate tunnels as a way to avoid massive expense and disruption.

One option was a “hybrid” tunnel between the Torrens and Anzac Highway, another was a “super-tunnel” from the Torrens to Torrens project to Darlington, and the third option was a surface-level upgrade only.

Transport Minister Stephan Knoll said at the time that the Government would choose the best rather than cheapest option, and while tunnelling cost more it was less disruptive.

West Torrens Council CEO Terry Buss today said that despite owning a number of properties on South Rd, the council had been offered no consultation on the project and its possible impact.

“We are unsure about what might be happening with this upgrade – we are in the dark as much as anyone else.”

While Buss believed the theatre’s setback from South Road might save it, he wasn’t sure about the future of its corner carpark, used by trucks to load equipment for concerts in through a side entrance.

He also wasn’t sure about the future of the council-owned former Thebarton Council chambers, sited directly on South Road.

“Residents have made it clear to me that they’re outraged at the thought of a bulldozer anywhere near Thebby,” he said.

“It is the local residents who Thebby ultimately belongs to, and the passion they have for the theatre spreads far and wide across the entire state.

“I know that I’ll be making their voices known in the council chamber and to the State Government, and I suspect I’ll not be the only one.”