At a Crime and Public Integrity Review Committee hearing last week, Lander questioned the way SAPOL handles its complaints process, noting that police matters “that have been assessed as raising a potential issue of corruption, or raise some other issue that should be referred to the Office of Public Integrity, must be referred to the OPI and may be investigated by the ICAC”.

Lander told the hearing that the Police Commissioner had the authority to determine when matters should be dealt with by way of management resolution, but if a matter was not assessed as raising a potential issue of misconduct or maladministration it did not fall under the Police Complaints and Discipline Act.

He went on to say “insofar as SAPOL purports to exercise powers under the PCD Act if a matter is not so assessed, in my opinion SAPOL is acting without any statutory authority”.

When questioned about Lander’s claims at a separate hearing this morning, Police Commissioner Grant Stevens denied that his organisation was acting beyond its limits.

“I would argue that I do have sufficient authority to use management resolution as a remedy to use the information that’s provided to us that maybe relates to service delivery for communications issues within a workplace,” he told the committee.

“I don’t see that we are certainly not acting unlawfully.”

Stevens said that management resolution constituted an effective disciplinary tool and often involved directing employees to undertake training, removing their authorities, or transferring them to different sections of the organisation.

Labor MP Tom Koutsantonis pressed Stevens on the weight of Lander’s remarks, suggesting that the comments implied that SAPOL was acting against the law.

“It seems to me here, that the ICAC Commissioner is inserting himself in the day to day management of you and your police force and given your statutory role, your decision about how to investigate matters and when,” Koutsantonis said.

“From what you’ve said to me, it seems a very reasonable situation that’s occurring as you’re dealing with these complaints.

“You’re using a very sensible interpretation as an independent statutory officer to investigate matters using management resolution because that would be what the public expect.”

But Stevens played down Koutsantonis’ suggestion, saying he had misinterpreted the meaning of Landers’ remark.

Stevens told reporters after the hearing that he had differing views to Lander on the use of management resolution, but that there was no “major conflict” between the two.

“I don’t see a major conflict there, we have a difference of opinion and we’ll continue to do what we’re doing,” he said.

“He believes that we shouldn’t be using it, that we don’t have statutory authority to do so.

Stevens went on to say he had a “very strong and positive relationship” with Lander, despite using today’s hearing to air his view that the removal of the Police Ombudsman in 2017, and ambiguity in what constituted corruption had led to an increase in the number of complaints against police.

He said the state’s integrity system “as a general rule is working well”, but it required “wholesale changes” to ensure organisations such as his were not backlogged with trivial complaints.

“The span of the definition of corruption is problematic,” he said.

“Technically, any instance of contact which constitutes an offence would meet the definition of corruption.

“This would technically include incorrectly recording a work start time on a time sheet, swearing in a public place, driving a motor vehicle with an expired drivers’ licence, or urinating on the side of the road while on duty.

“Once a matter is characterised as corruption so commences a prescriptive process without the opportunity for resolution by management involvement.

“The definition of corruption means that relatively minor conduct takes the same administrative path as behaviour that clearly falls with what the public might expect to be defined as corruption, such as stealing large amounts of money from Government.”

Also fronting this morning’s hearing, the state’s Ombudsman Wayne Lines said the removal of the Police Ombudsman two years ago, and administrative backlog had increased his office’s workload. 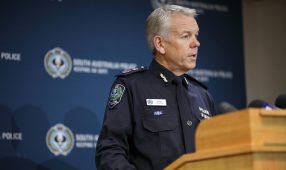 He said that his office required an additional $500,000 each year to meet the extra demands placed upon it, but he was not hopeful that the Government would provide that funding.

“There wouldn’t be any point in the current financial climate to be asking for that money,” he said.