Ombudsman Wayne Lines made a finding of misconduct against Michael Deegan, who was sacked by the incoming Liberal Government in March last year as head of the Planning, Transport and Infrastructure Department, over his intervention in a Freedom of Information request by the then-Opposition concerning his own purchase card expenditure on meals and entertainment.

The inquiry also found the department’s practice of funding the purchase of meals, drinks and entertainment by the former Chief Executive “amounted to maladministration in public administration”.

That spending was authorised by former departmental executive Julienne TePohe, whose “approval of purchase card transactions incurred by Mr Michael Deegan was wrong within the meaning of… the Ombudsman Act”, Lines found.

The receipts included an $860 bill for The Barn Steakhouse at Mt Gambier during Country Cabinet and another for $1489 at the Grill Royal in Berlin with then-minister Stephen Mullighan and various dignitaries.

“I am all the more concerned by DPTI’s practice of funding restaurant meals between the Chief Executive and other public officers,” Lines noted.

“I note, in particular, that DPTI appears to have funded at least two CBD restaurant meals between Mr Deegan and the Minister responsible for this Department – at least one meeting of which involved the purchase of alcohol using departmental funds.” 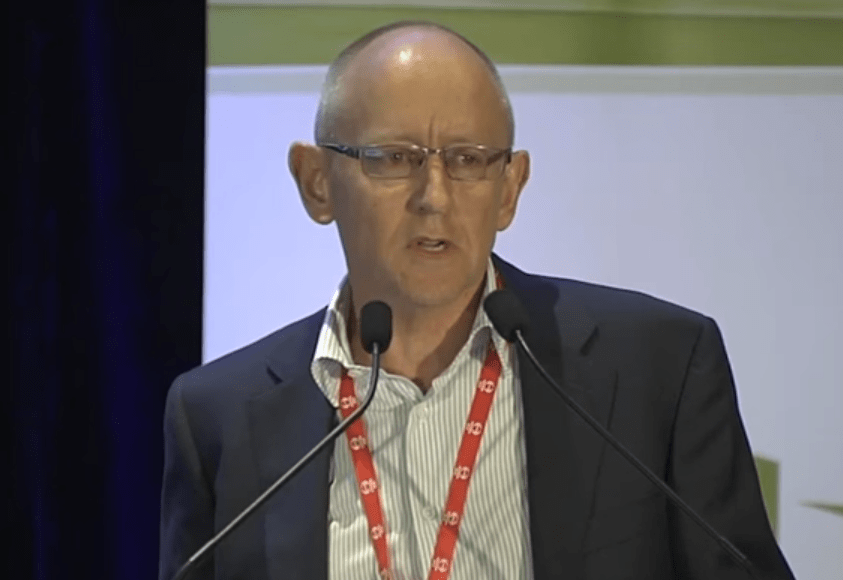 Michael Deegan speaking at a conference during his time as DPTI chief executive.

The original FOI request was lodged in December 2016 by now-Treasurer Rob Lucas, seeking “all invoices and expenditure for the period 2015 and 2016”.

“In particular, we were seeking copies of invoices of alcohol and meals expenditure by the CEO for meals with Minister Mullighan,” he said in a statement today.

“By refusing to provide these invoices when required by the Ombudsman, Mr Deegan managed to prevent the release of any of these embarrassing invoices until after the 2018 state election.”

Mullighan, now the shadow treasurer, told InDaily he was “not aware that the Ombudsman was conducting an inquiry into the matter and I have not been approached”.

“My recollection was that all meal expenses were incurred in the course of ministerial business, and I had no input or involvement with the management of the FOI process, into which Mr Lucas sought the inquiry.

“I also note that the scale of such expenditures is significantly less than the current expenditures of the Marshall Liberal Government.”

Lines found there had been a “substantial mismanagement of public resources” including the purchase of alcohol without “sufficient or any rationale”, and that there had been transactions of “dubious public value and in excess of reasonable community expectations”.

In a response to the initial investigation, Deegan strenuously disagreed with the finding of misconduct, writing to Lines through his lawyer: “We are instructed that the relevant staff in the FOI Unit were continually placed under substantial pressure as a result of the number of FOI Applications and indeed as a result of continual pressure from your office.”

“Mr Deegan disagrees that DPTI contravened section 39(7) of the FOI Act in the course of the external review, and that it otherwise acted in apparent contravention of the law.”

The missive argues the Ombudsman’s “punitive approach to effectively ‘performance managing’ the Department in this respect, rather than seeking to improve the relationship between your office and DPTI, is likely to have a counterproductive effect in the Department seeking to maintain experienced and skilful staff in this area”.

Deegan cited a “lack of evidence in relation to [the] findings”, pointing to “a number of inferences and assumptions that are made in your report, which do not form a sound basis for the ultimate findings, having regard to the seriousness of the allegations”.

Lines concluded that given Deegan is no longer a public officer, “I do not consider it necessary that I give further consideration to the question of Mr Deegan’s conduct under the ICAC Act”.

“I am nevertheless of the opinion that Mr Deegan’s use of the purchase card to incur the expenditure at issue was wrong, insofar as it was largely instrumental to the issue of maladministration in public administration identified above,” he found.

He also called for the development of policies around “the provision of catering and other forms of official hospitality through use of departmental funds”, particularly regarding alcohol and out of hours use.

The Purchase Card Policy should be revised “so as to expressly require that transactions be reasonable and publicly defensible, and to emphasise that it is the responsibility of both cardholders and card supervisors to ensure that all transactions meet this criteria”, he wrote.

“I have noted the lack of any whole-of-government policy relevant to the purchase of meals, drinks and alcohol using public funds.”

TePohe, in her response, noted that “you found no misconduct and/or maladministration in my approval of the credit card transactions of Mr Michael Deegan”.

“In respect of your opinion that my decision in approving the expenditure was wrong, I note that although your recommendation is that there be a whole of government policy with respect to hospitality expenditure, there was no specific policy existing at that time,” she said.

Braxton-Smith told the inquiry he did not approve of the conduct under investigation, saying he did not have a DPTI-issued credit card.