The Marshall Government today confirmed the appointment of former Senior Trade and Investment Commissioner for Austrade in Singapore Leonie Muldoon as the agency’s new chief executive.

Premier Steven Marshall said Muldoon, who has worked in senior posts in India, Sri Lanka, Pakistan, Bangladesh and Japan, has “the expertise to drive the South Australian Growth Agenda”, and implement the recommendations of a recent sector review by former New Zealand Finance Minister Steven Joyce.

“We… look forward to benefiting from her wealth of international experience to continue to drive our exports, investment and visitor economy,” Marshall said in a statement.

“Ms Muldoon’s in-depth knowledge of export markets in Asia, which are a crucial pillar of our state’s economic growth, will be invaluable as we strive to further strengthen our export and investment opportunities into the future.”

Marshall said the Government had an “ambitious agenda to grow local jobs and strengthen our economy” through “thriving trade and tourism sectors”, and that Muldoon’s experience and expertise in these areas “will help us deliver growth, creating jobs and driving our economy as a whole”.

Muldoon is a lawyer and former partner with the Sydney banking and finance division of Mellesons Stephen Jacques, now King & Wood Mallesons.

She replaces Mike Hnyda, who took early retirement in March, shortly before the Joyce Revioew was handed down, after being initially headhunted from Wales in 2015 by former Trade Minister Martin Hamilton-Smith to oversee the state’s Investment Attraction agency, and retained by the Liberal administration to head up the rebadged department.

Premier’s department boss Jim McDowell has overseen the department in the interim.

In an April email to agency staff entitled “new structural arrangements”, McDowell confirmed a report in InDaily that a raft of senior executives had been axed.

“Thank you for your patience and support as we look to implement the recommendations from the Joyce Review,” he wrote. 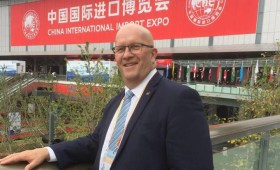 “I [have] advised… that I had decided to reshape the department’s structure to enable us to deliver the government’s key economic priorities. I have now implemented the first stage and would like to acknowledge the contribution of a number of our leaders as they leave the department.”

The list was headed by Marco Baccanti, chief of Health Industries SA, which has been wound up. The agency’s former website now diverts to a separate DTTI page.

Baccanti relocated to SA from Italy for the role, but appears to have remained in Adelaide. He is yet to remove his former title from his social media or LinkedIn profiles, and tweeted as recently as last week about his Adelaide lifestyle.

This nice article is about how I live in #Adelaide, and it is now printed (pages 34-35) on the official City Living Prospectus of @CityofAdelaide. If you are there, get your copy! https://t.co/OVNvoCdolG