Each year more than 100,000 colourful giant Australian cuttlefish head to the Upper Spencer Gulf Marine Park for the only known mass aggregation of its kind in the world.

After appearing on television shows last year including David Attenborough’s Blue Planet II, Totally Wild and The Living Room, this year’s breeding season is expected to attract a record number of tourists to the region.

The aggregation reached 150,000 in 2018 and has grown so popular it has spawned its own celebration, CuttleFest, which is led by Whyalla City Council and supported in kind by Natural Resources EP.

The bizarre cephalopods gather along an 8km stretch of rocky reef at Point Lowly in the Spencer Gulf, about 20km east of Whyalla.

Charter, who has been diving for more than 30 years, says it is difficult to explain just how incredible the experience is.

“It’s like a high-definition TV, and it’s actually more pixels than the best TVs we’ve got,” he says.

“They can change to all different colours of the rainbow within a heartbeat.

“They’ll go from white to black to green or blue or red, depending on their mood and what they’re thinking probably.

“They’re like little aliens, really. They’ve got three hearts and they pump green blood and they’ve got all these different colours they communicate with their skin. They could easily be aliens.”

Nicknamed the “rock stars of the ocean” because they live fast and die young, cuttlefish have a life span of just 12-18 months. This makes each May to August breeding season critical because the number of surviving eggs one year directly impacts the number of adult cuttlefish that return the next year to breed. 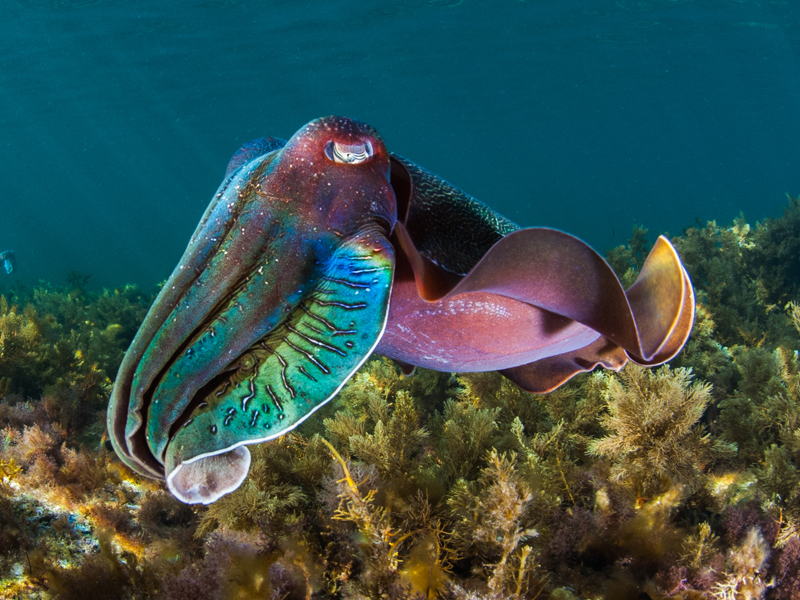 Giant Australian cuttlefish, Sepia apama, are found all along the southern Australian coast in waters off Western Australia, South Australia, Victoria and New South Wales. But they are not known to aggregate in large numbers outside of Point Lowly.

“Five years ago the numbers plummeted to almost zero, no one knows exactly why, but now over the last five years the population has gotten bigger and bigger,” Charter says.

Cuttlefish-breeding season begins in late May and CuttleFest runs from June 1 until August 31. It will include food and coffee vans, educational activities, guided snorkelling and art displays.

Held in Whyalla, the official opening will feature a kite show, kids’activities and a space for visitors to experience swimming with cuttlefish without getting their toes wet via virtual reality goggles.

But the overwhelming attraction is the chance to swim with the cuttlefish in shallow waters just metres from the shore.

Whyalla Maritime Museum and Visitors Centre visitor and opportunities coordinator Teresa Coles says nothing beats getting up close and personal with the cuttlefish.

“It’s such an easy snorkel area to get in and out of the water.”

While it is unclear what causes the cuttlefish numbers to fluctuate, favourable conditions and a series of law changes, such as fishing bans, have helped them recover in recent years from 13,000 in 2013 to 150,408 in 2018. This is approaching the peak estimate of 182,000 in 1999.

“We’re just starting to hear reports of the cuttlefish moving in,” he says.

“They come in huge numbers by the end of June. We’re expecting probably 100,000 plus cuttlefish in that small 8km piece of coast.” 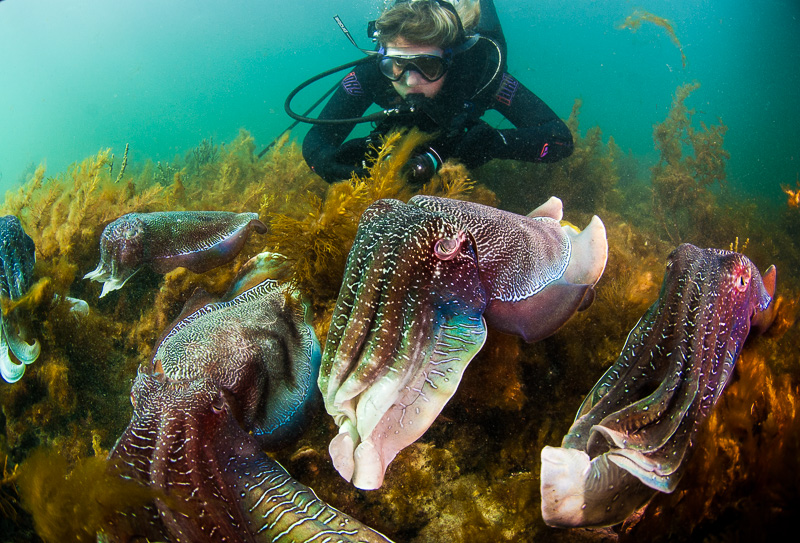 The event attracts tourists from across the globe, with more than 1000 people estimated to dive with the cuttlefish over three weeks, almost doubling the number of snorkelling tours run by Experiencing Marine Sanctuaries last year.

Charter says the ideal time to snorkel with the marine creatures is towards the end of June and into July, when the females will place their eggs underneath the boulders around Point Lowly.

The Spencer Gulf is typically made up of mangroves, sandy bottoms and sea grass beds, making the uncommon habitat of rocky reef in the area a natural drawcard for the cuttlefish.

Also known as the chameleons of the sea, cuttlefish have special skin cells called chromatophores, which allow them to change the colour and texture of their skin within a second from blues to greens to purples and black to help them hide from predators, ambush prey and attract a mate.

“I’ve been taking trips there for the last four years and every time I go there I see different behaviour,” says Charter.

“If you go there, and you’ve never been before, and you swim across hundreds of them and keep on moving… they’ll probably swim away from you.

“But if you hover there and watch them for 10 minutes, you’ll see different things.

“The female will duck under a ledge and lay some eggs, then she’ll come back out and the male will try to chaperone her and the other males will come in with the shimmering effect on their backs to try and compete for her.”