Knoll today “apologised in advance” to motorists using South Road for anticipated delays after two sections on a 220 metre stretch of embankment adjacent the Darlington roadway upgrade collapsed this week – with the minister conceding he still didn’t know “how the hell this happened in the first place”.

He said yesterday water had seeped into the soil behind the sprayed concrete (or “shotcrete”) façade, causing erosion which prompted the frontage to crumble.

But he came under fire from the Labor Opposition today for failing to visit the site since the troubles began, instead spending much of yesterday in the state’s south-east where, they alleged, he attended a Liberal fundraiser for local federal MP Tony Pasin.

Knoll defended his no-show on the South Road site, saying: “I’m not an engineer.”

“I think in relation to this, the people who need to be on the site first and foremost are the people who can tell us what the problem is and how to fix it,” he said.

“I’ve been provided with multiple daily updates and vision of what’s going on there.” 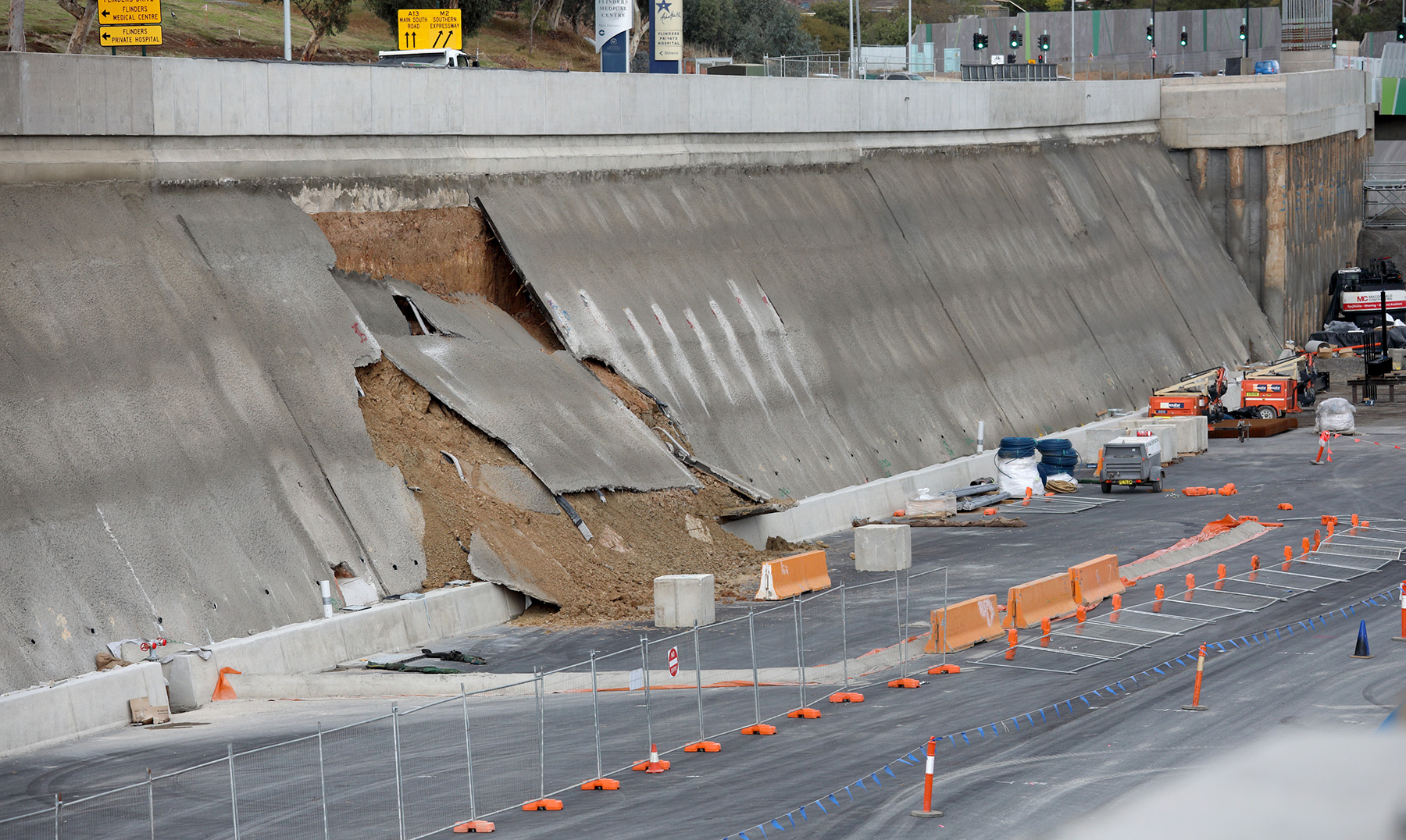 However, he seemed happy to lend his expertise to an appraisal of country roads, arguing “I was looking at some pretty shoddy roads down in the southeast yesterday”.

“I think it’s important to go and have a look at those roads,” he said.

He repeatedly refused to concede he had attended a fundraiser, saying: “Look, there was a whole series of functions we went to… it was a function that was held by the local Liberal MP.”

He maintained he had “constant and multiple briefings” about the ongoing Darlington debacle, and “was being briefed constantly during the course of the afternoon”.

However, his office yesterday told InDaily he was in transit in the south-east and out of phone range, in response to inquiries about the contractor responsible for the 220-metre stretch of road.

The Darlington upgrade, part of continuing works along the North-South corridor, was begun in 2016 by the former Labor Government, with Gateway South – a consortium comprised of Laing O’Rourke and Fulton Hogan, along with various smaller companies – contracted to deliver the $620 million road link.

The Department of Transport, Planning and Infrastructure today confirmed there had been no re-scoping of the project under the Liberal Government, with a spokesman telling InDaily that “the former government changed the scope of this project in 2016 and this variation was agreed to by the contract in July 2017”.

CFMEU insiders have raised concerns about a lack of steel reinforcing when the ‘shotcrete’ was laid, with photographs suggesting the concrete was sprayed directly onto the soil.

A CFMEU photo of the waterlogged site.

Meanwhile, three “experts” have been flown in from Perth, Brisbane and Melbourne to assess the damage, its possible cause and how to fix it, with Knoll saying he would today “be going down on site to get fresh updates about precisely what’s gone wrong.”

Engineers have sprayed foam and laid bitumen along the roadway “to try to arrest some of the water ingress into that soil”. 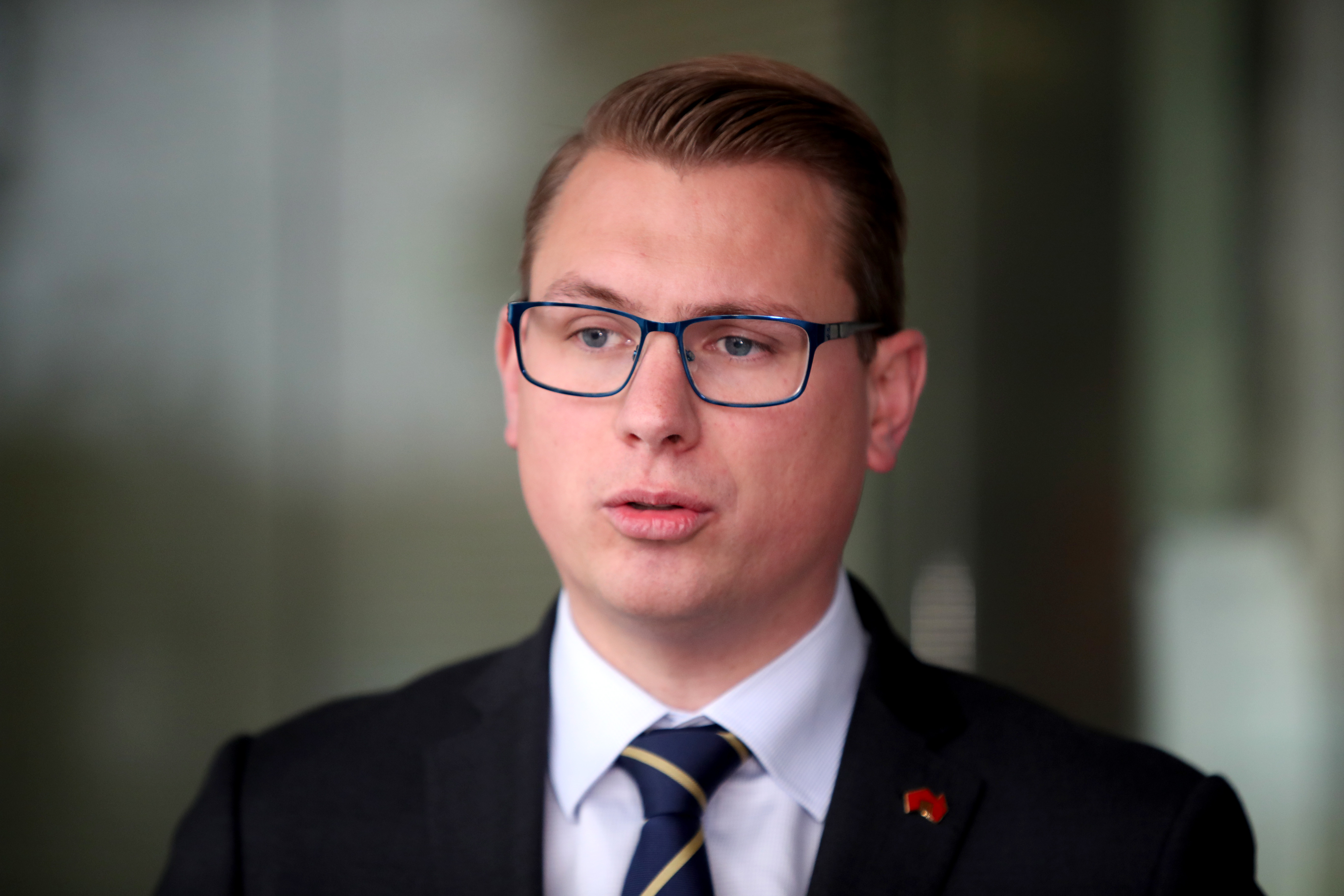 Opposition spokesman Tom Koutsantonis lamented that Knoll was yet to visit the site yet “found time yesterday to go to a Liberal Party fundraiser in Mount Gambier”.

“This young man has got his priorities all wrong – this is a fiasco, and a dangerous fiasco,” he said.

“At what point do you say ‘this kid’s out of his depth’?

“If the minister’s not competent enough to complete this project because our roadworks can’t cope with rain, how are they going to deliver the rest of the North-South corridor? It’s unacceptable and I have now grave concerns about the integrity of South Road and whether or not it needs to be closed while this remediation work goes ahead.”