Paul Bunney, 63, was arrested on Wednesday and bailed to appear in court on May 22, four days after the federal election.

In a brief statement to InDaily, police confirmed “a 63-year-old man from Aldgate was arrested and charged with stalking on Wednesday 24 April [and] has been bailed to appear in the Mount Barker Magistrates Court”.

He has since been cut loose from Sharkie’s campaign to retain the Hills and coastal seat of Mayo, with the MP telling InDaily: “Allegations of this nature are extremely serious and this person has been told in clear terms that they cannot be a part of my campaign in any capacity”.

“I have zero tolerance for the sort of behaviour alleged, no matter how passionate a supporter may be… every candidate has the right to feel safe in this campaign,” she said.

Bunney told InDaily his arrest was “a bit confusing to be perfectly honest”, saying the allegations stemmed from various interactions, including an earlier accusation that he had posted Downer’s address on Facebook.

He acknowledged that he did write “what street she lived on” in a social media post after noticing her turn into her driveway recently, but insists “I’ve never followed her”.

“She was driving on the road in front of me and turned into her driveway… there’s no secret there, anyone walking past could see her name on the bonnet,” he said.

“To be perfectly honest, I don’t know how she would have known I even saw her at the time.” 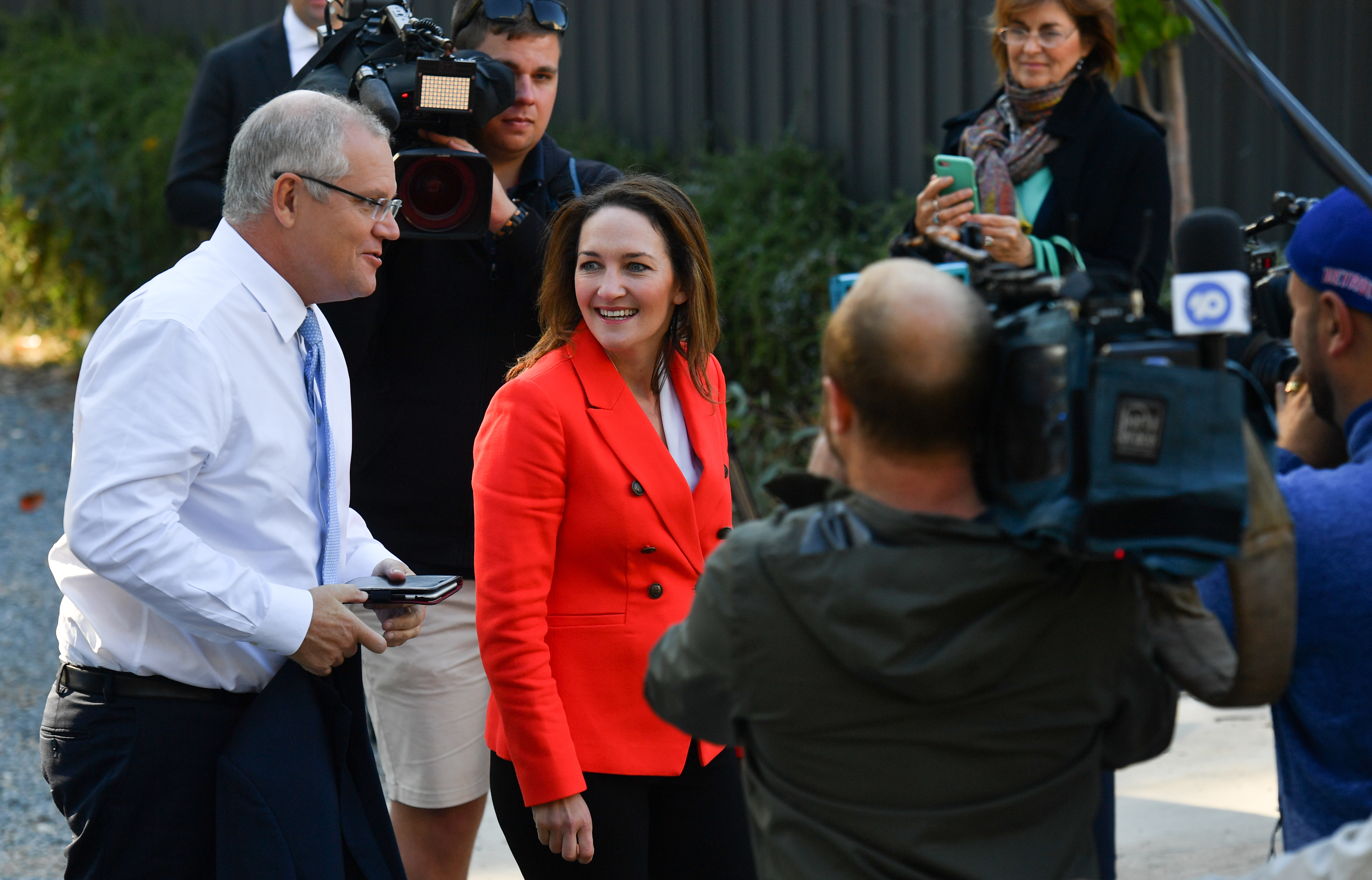 Bunney said he was a Centre Alliance member and has also been involved in activist organisation GetUp – although the group today suspended his membership after being approached for comment by InDaily.

He insisted he had “never introduced myself” to Downer, but had spoken with her at a recent public street forum.

“I just asked her about something that’s happening in [the Hills]… I never said anything to her at all apart from that one time,” he said.

He said he had previously been cautioned by police after calling Downer’s campaign office on April 16 to complain about alleged “corflute tampering”.

“I put some of Rebekha Sharkie’s corflutes up on the main street of Aldgate, and came out the next day to find that four of the prominently-displayed ones had all been pushed up and had Georgina’s placed underneath them,” he said.

“I rang the office and complained – I was pretty angry but I wasn’t abusive… I just said I’d like them to do something about it.”

On Good Friday last week, he said he saw Downer in a Hills carpark as he was emerging from the supermarket.

“She must have seen me walk out in my Rebekha Sharkie shirt… and I think I looked in [the premises she entered] to see if there was anyone I knew,” he said.

“I’m not allowed to go there now.”

He said he was subject to strict bail conditions, which meant he could no longer go within 50 metres of the shopping precinct, nor approach Downer herself.

He said he didn’t consider the incident to be part of his campaigning efforts, “other than the fact I was wearing a Rebekha Sharkie shirt at the time I was shopping on Good Friday”.

He said he knew Sharkie “through supporting her” but was now considering cancelling his party membership.

“The last thing I want is for this to reflect badly on Rebekha Sharkie,” he said.

Bunney said he had informed Sharkie about his arrest “and agreed not to be a volunteer any more or attend functions… basically disassociate myself completely from her”.

He acknowledged being on the GetUp “mailing list”; a Google search suggests he has RSVPed to several of their recent Action Group meetings in SA.

Bunney said he was previously a member of the Liberal Party.

Sharkie was not available for interview but told InDaily in a statement: “It was brought to my attention very recently that allegations have been made against one of the campaign volunteers.”

“While everyone is entitled to the presumption of innocence, allegations of this nature are extremely serious and this person has been told in clear terms that they cannot be a part of my campaign in any capacity,” she said.

“I have zero tolerance for the sort of behaviour alleged, no matter how passionate a supporter may be.

“Every candidate has the right to feel safe in this campaign.” 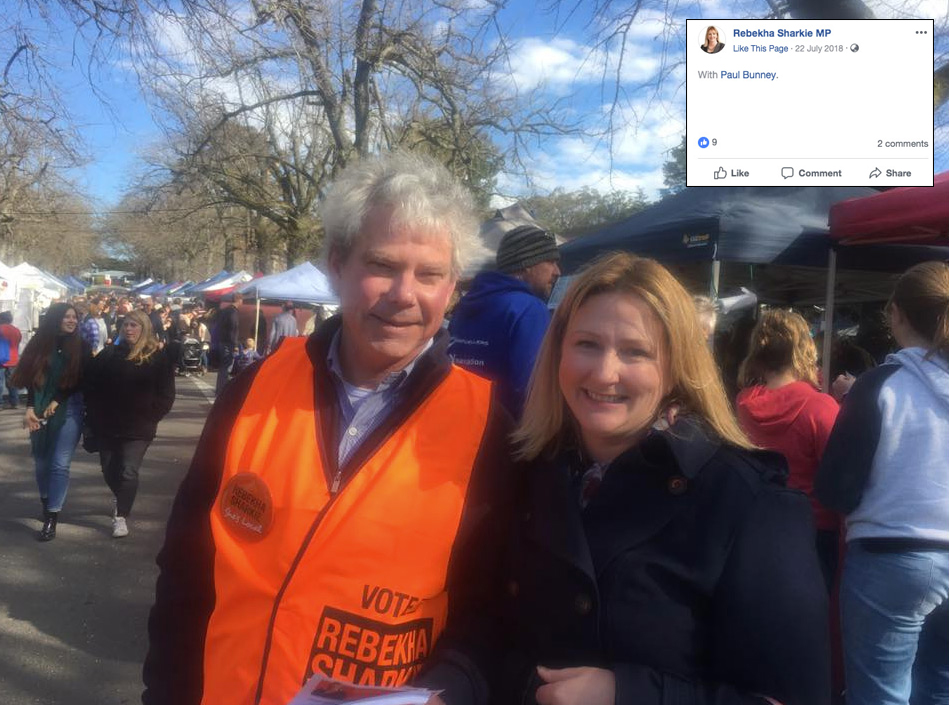 Sharkie said more than 850 people had approached her office “to volunteer their support in some capacity, big or small, for this campaign”.

“We have a wonderful community and my volunteers are part of this caring and supportive community,” she said.

A GetUp spokesperson said the group condemns all alleged behaviour of this kind, as “it is not how elections should be run”.

They said no-one had been volunteering for GetUp in Mayo, as “our campaign has been squarely focused on Boothby”.

However, “whilst this individual was not acting as a GetUp volunteer, GetUp has a very clear volunteer code of conduct, and we have taken the precaution of suspending him”.

Downer said she was not able to comment on the matter, with Liberal state director Sascha Meldrum saying it was “inappropriate to comment as it is a police matter”.