At a meeting on Tuesday night, city councillors were called to express their views on where the $5.5 million east-west bikeway through the CBD should be located – despite the council approving Flinders and Franklin Streets as the preferred location in September last year.

At the time it was argued Flinders and Franklin Streets were already popular with cyclists, featured no bus stops and had the potential for widened footpaths and more street trees.

The other two bikeway options – Pirie and Waymouth Streets, and Grote and Wakefield Streets – were deemed less suitable, as they are narrower and have heavier traffic flow.

The council decided in May last year that work on the east-west bikeway would be put on hold until the completion of the north-south bikeway on Frome Street.

Meanwhile, tensions have brewed in the council chamber over how and when to start work again on the east-west route.

At Tuesday night’s meeting council staff called for views on where the east-west bikeway should be located.

Deputy Lord Mayor Houssam Abiad – who moved to approve Flinders and Franklin Streets for the east-west route last year – told the meeting he was now “inclined to remain open”.

“I think I’m more inclined to remain open to have a chat around Pirie and Waymouth, but I wouldn’t mind seeing the data and understanding the improvements to the public realm in that space,” he said.

Abiad was supported by area councillors Franz Knoll and Anne Moran, who argued Pirie and Waymouth Streets were already popular with cyclists.

“Pirie and Weymouth already have a strong bicycle traffic if not the most,” Knoll said.

“I see that as being an indicator that for the sake of the bikes that is a better way to do the east-west.”

Moran alluded to a report on the Flinders-Franklin separated bikeway presented to the council in 2017, which said it would require “changes to traffic and parking arrangements (which) will cause concern to some members of the community” – and there may be “some impacts to existing outdoor dining areas”.

“We have had our consultation on that street and that was definitive – it cannot go down there because at the end of the day the people that own the buildings and work in businesses do have a say,” Moran said.

Martin said he “wished that council would just get on and bloody do it (start work on the east-west bikeway).”

Simms agreed, telling InDaily yesterday that the council’s continued discussion on where to put an east-west bikeway was “a bit of a roadblock”.

“I think the community is seeing us doing U-turns on the bikeways and it’s probably very frustrating for them to see us taking two steps forward and three steps back,” he said.

But central ward councillor Jessy Khera warned at Tuesday’s meeting that the council needed to be careful of propagating “an element of moral hazard” through the bikeways project.

He gave the example of his friend’s mother – who he said endured permanent brain damage while riding her bike – to argue, “there can’t be a separated bikeway everywhere”.

“We want to encourage a huge number of people to get on bicycles and I think as a government we ought to be careful and not take the word of sectional interests who want to push the idea that there are no risks involved,” he said.

“There are risks involved in all these decisions.” 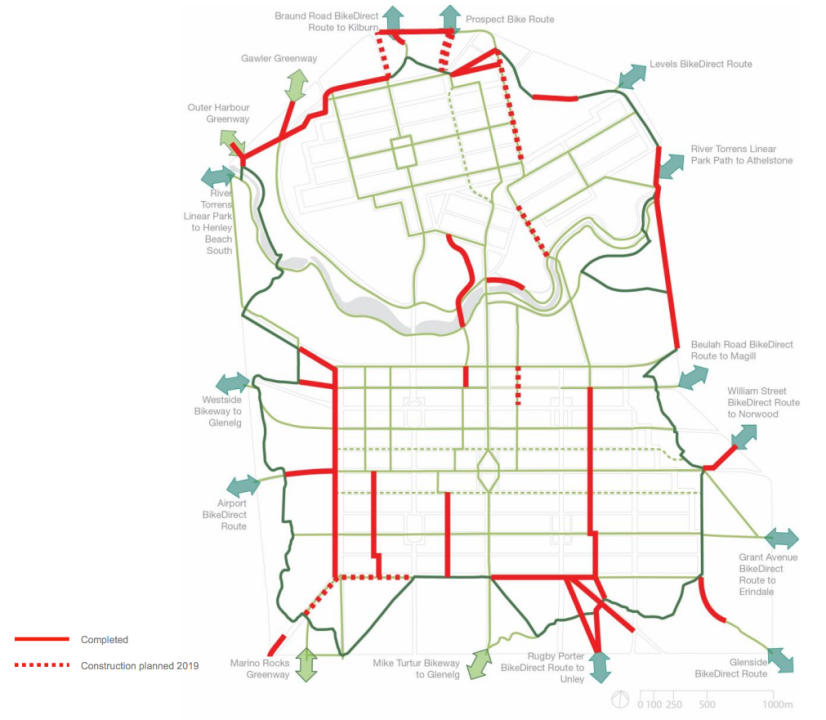 Work is continuing on the north-south bikeway along Frome Street, which is currently stalled due to the ongoing construction of the 36-storey Adelaidean hotel complex.

The council’s director of operations, Beth Davidson-Park, revealed last month that if the council were to replicate the standard of the Frome Street section of the north-west bikeway on a second east-west route, it would need to spend up to $20 million, exceeding the current $5.5 million in council and State Government funding set aside for the project.

However, a State Government spokesperson said the Government “would be happy to work with the council to explore alternative funding options” for the east-west route.

Davidson-Park – who will resign from the council later this month – told InDaily yesterday that no firm direction was given from Tuesday’s meeting.

“While the previous Council approved Flinders-Franklin as the preferred East-West route, administration is now working with elected members on the options for the East-West Bikeway before commencing this stage of the Bikeways project,” she said.

“Pirie Street and Waymouth Street, together with Grote Street and Wakefield Street remain as other considered options for Council to discuss.”

A report presented to councillors on Tuesday night shows 60 per cent of Adelaide’s population are “interested but concerned” about bike riding and would not ride unless safe, separated bike facilities, such as the bikeway on Frome Street, were provided.