A State Government spokesperson told InDaily yesterday the Government was working with the Adelaide City Council to assess whether parts of the City Connector bus route that replicate the free tram network in the CBD are “the best use of taxpayer and ratepayer money”.

The statement comes after Adelaide City councillors informally agreed at a meeting on Saturday to save the City Connector bus from cuts in the council’s 2019-20 budget.

The free public bus service was introduced in 2014 as an amalgamation of the former City Free service funded by the State Government and the Adelaide Connector service operated by the city council.

The service, which is currently co-funded by the State Government and Adelaide City Council, runs on two loops – an inner city loop and an extended loop around North Adelaide.

In a draft council budget paper obtained by InDaily, the council warned that the State Government was considering halving its funding contribution to the City Connector service.

“The service is dependent on the State Government co-funding the service through their current bus contracts, as stated in the Deed of Agreement,” the document, dated February 22, says.

“We have been notified that the State are considering reducing their contribution to the service by 50%, discussions have commenced noting that should the State reduce their funding it is recommended that Council consider a commensurate decrease in funding from (sic) the City of Adelaide.”

The draft paper states a reduction in State Government funding could have an impact on the service’s operational cost.

“The State Government’s metropolitan passenger bus contracts will be renewed in 2020; this may impact on the operational cost of the service,” the document says.

The council has a contractual agreement with the Department of Planning, Transport and Infrastructure for the operation and maintenance of the City Connector service, which, according to the draft paper, was recently renewed for a five-year period.

Council CEO Mark Goldstone told a committee meeting last week that the council’s administration was in discussions with the Department of Planning, Transport and Infrastructure about the future of the service.

In draft documents handed to councillors at the same meeting, staff suggested the council could stop funding the free City Connector bus, in the hope that the State Government would absorb the costs in the future.

However, councillors opposed a funding cut to the City Connector service at Saturday’s meeting. They instead asked staff to identify where Council could trim fat from core services.

A council spokesperson confirmed that Saturday’s decision was not set in stone and might change during the budget consideration process.

According to the draft paper obtained by InDaily, between January 2014 and March 2018 the City Connector bus recorded a growth of 51 per cent when compared to the Adelaide Connector and City Loop services it replaced.

The paper states a funding boost could expand the service’s operating hours and service frequency, and would provide new services to areas currently not served by the two bus routes. 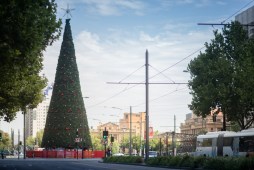 “The State Government are already cutting public transport throughout the state and it would be another blow if this service also reached the point where it wasn’t going to continue,” he said.

“This council has had a big focus on wanting to bring more people into the city, so we need to be thinking of public transport as something that needs to be sustainable.

“If anything, it should be expanded not cut.”