In September, Chapman issued a media statement after Planning Minister Stephan Knoll refused to answer questions in an estimates hearing about senior staff at the agency going on sudden leave.

The statement confirmed the Attorney had “enquired of the Independent Commissioner Against Corruption, Mr Bruce Lander QC, as to whether there is any further information that can be made available on this matter… he confirmed that there is not” .

However, he later told InDaily he had instructed Chapman not to refer to his office in any public statement.

“I told her that I would not be making a statement.”

The Labor Opposition later referred to matter to SAPOL, but Police Commissioner Grant Stevens has repeatedly refused to be drawn on the matter.

However, Chapman told parliament today: “I was advised this morning that the South Australia Police have commented in relation to a preliminary assessment by police of a statement I made last year.”

“I understand the matter has been referred to the Director of Public Prosecutions for assessment.”

She said that given the Police have made these comments, “I wish to advise the Parliament and the public that what has occurred in relation to the assessment and referral are appropriate steps”.

“It was reported late last year that the Police were undertaking a preliminary assessment of a mater that was brought to their attention,” she said.

“It was entirely appropriate that police assess this matter as they do with all referrals from South Australians, including the Labor Party.”

Chapman has repeatedly stated that she has sought Crown Law advice and is confident “no breach has occurred” of the ICAC Act, however she has refused to release the advice.

“To avoid any perception of conflict, I understand that the Director has briefed the matter to external counsel,” she told parliament today.

“Again, this is appropriate, and not unusual.”

She told parliament that she would “repeat what I have said previously – I am satisfied that no breach of the Independent Commissioner Against Corruption Act occurred in relation to my statement last year”. 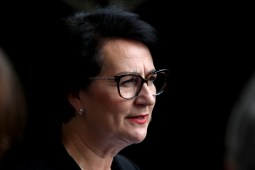 “I will continue to perform my duties as Attorney-General, which includes working with the Director and the Police Commissioner, as I have done since coming to office last year,” she said.