The majority of councillors – including all six so-called “Team Adelaide” representatives – last night voted in favour of removing a clause in south ward councillor Helen Donovan’s motion calling on council to commence the east-west bikeway consultation in April.

The council decided in May last year that work on the second bikeway, likely to be located along Flinders and Franklin Streets, would be put on hold until completion of the highly-contested north-south bikeway on Frome Street.

That bikeway opened in early 2014 and was immediately the subject of intense political debate – pitting motorists against cyclists – until parts of it were ripped up and rebuilt in a new, thinner design last year.

It is unclear when the north-south route is likely to be completed, with works currently stalled due to the ongoing construction of the 36-storey Frome Street Adelaidean hotel complex on Frome Street between Rundle Street and North Terrace.

Donovan told last night’s meeting that there was “no point or need” for council to hold off from commencing its consultation for the new east-west link due to uncertainty surrounding the Adelaidean’s completion date.

“That is not going to be finalised until, most likely, the end of 2019 and there could be additional barriers that come up there,” she said.

But Donovan’s motion was thwarted by an amendment moved by fellow south ward councillor Alexander Hyde that scrapped the April consultation start date.

His amendment proposed that council administration instead consider a separated bikeway along the King William Street tramline. The amendment also called on the council’s administration to develop a consultation strategy that could be used as a framework for future cycling infrastructure work.

In moving the amendment, Hyde declared former Lord Mayor Stephen Yarwood’s leadership in initiating works on the original north-south bikeway as “the biggest single disservice that was done to cycling infrastructure in this city”.

“We need to remember that Adelaide is sometimes placed as not appreciating new things as much as perhaps it should, but because it was approached in the wrong way (and) because the groundwork was not done properly we can in all likelihood set back cycling infrastructure for many years,” he said.

“What this amended motion achieves is an opportunity for this council to get the framework and the approach to building cycling infrastructure in this city right from the get-go.

“What this does is allows this council to enter into that realm in a considered way, without rushing into it.”

But Hyde’s move was slammed by councillors Robert Simms and Phil Martin, who said the amendment was akin to delaying work on the east-west bikeway further.

“I see it as being more backpedalling, more analysis paralysis when really what we should be doing is moving onto consultation on the east-west and making that happen and ending the delays,” area councillor Robert Simms said.

“I’m concerned that we’ve been down this road many times before and the community has been involved in discussions about east-west, we’ve been through the process of developing and scoping out the network, now is the time to actually start on consulting on this specific phase.”

North ward councillor Phil Martin said the council had unspent funding from the State Government to complete the east-west bikeway and, as such, the council should start consultation in April.

The State Government contributed $6 million towards the construction of the east-west and north-south bikeways in July 2016, with that funding matched by the council – bringing the total funding to $12 million.

But the council’s director of operations, Beth Davidson-Park, revealed at last night’s meeting that if the council were to replicate the standard of the north-south route on the east-west bikeway, it would need to spend between $16 to $20 million.

“We can roll the first 25 per cent (of funding) on east-west – that’s all we can do, nothing else,” central ward councillor Houssam Abiad said, speaking in support of Hyde’s amendment.

“The bigger piece of the discussion here is what is the State Government planning around transport and traffic management in the city.”

But Donovan said it was “absolutely rubbish” that the council would need to spend up to $20 million on the east-west bikeway.

“What we know is, that is indicative of the current method that has been applied to Frome,” she said

“There is no way that level is going to be applied throughout the city.”

InDaily revealed last year that a group of council candidates endorsed by then-Lord Mayor Martin Haese had been meeting regularly, in private, ahead of last year’s local government election – but none was willing to acknowledge an affiliation with “Team Adelaide” publicly.

The grouping won the city council majority, with affiliate Franz Knoll telling InDaily in November that being part of the group meant that he would be able to “modify” his approach to policy proposals “so that what I bring is acceptable to the broader community”.

The voting pattern drew scorn from area councillor Anne Moran, who described the act of amending non-Team Adelaide-affiliate’s motions as akin to “cannibalisation”.

“This seems to be a common tactic in this council that when somebody puts forward something very simple, easy and should be voted for easily, a member of the larger faction comes in and amends it in a slight way that seems very innocuous on the surface but actually knocks the kitty out of the ring and completely denudes the motion of its veracity,” she said, in reference to her own motion being amended.

“I spoke to the Lord Mayor earlier today about this sort of voting and she assured me that wasn’t the case.

“It’s really disappointing that some of us said that they would lower the rhetoric, give the voting block a chance to prove that they could vote independently, but having a listen to what others said, I despair that (Team Adelaide) would ever be broken.

“I suspect it was done to stamp a name of somebody else on this motion and to knock mine out and I’m very, very annoyed.”

Addressing Lord Mayor Sandy Verschoor, she said: “I’m so disappointed because I thought that maybe we could see a way through here but this group is clearly going to vote together, whatever happens.”

Verschoor told InDaily this morning that while she had met with Moran prior to last night’s meeting, she said she did not give any assurances.

“There is nothing extraordinary or out of the ordinary with that.

“I didn’t give her any assurances. We were talking about the behaviours in the chamber and by that I meant all members’ behaviours and how we work together as a new council to make really good decisions.”

Verschoor said she was not concerned by how councillors were voting. 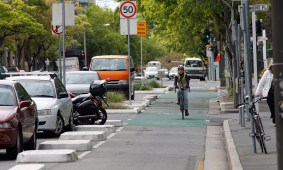 “What I want from my chamber is that each of them votes on the item in front of them on its merit and that they make their decisions in that way.”

Alexander Hyde said this morning that it was “pretty obvious” that voting trends had emerged in the council chamber.

“Those who run more of a green left platform run along those lines and those who don’t, don’t,” he said.

“I think personality comes into it but I tend to try not to engage in it and to develop a healthy rapport with everybody.”