Haese was announced as the new chair of the Premier’s Climate Change Council in December, at the time telling InDaily he would advocate for environmental policy to become a “huge economic driver for South Australia” over his three years in office.

Ahead of his first meeting as chair this afternoon, the former Lord Mayor said he was keen to continue work on a new cross-government strategy to improve South Australia’s responsiveness to climate change.

Haese’s predecessor, Bruce Carter, flagged the strategy in December, telling InDaily at the time that it would involve a top-down audit of across-government initiatives “that support adaptation dealing with climate change”.

According to Haese, the strategy would outline “measurable recommendations” for all government departments based on “environmental facts” and the “economic opportunities” that could arise from adopting environmental sustainability targets.

“One of the things that is clear about climate change adaptation and mitigation measures is that Government’s role here is to lead by example,” Haese said.

“That typically should include all departments and all arms of government. This would be something which would be a first for Australia”.

Haese said he didn’t want to pre-empt the nature of the recommendations likely to feature in the strategy, but he said the PCCC would use data from the Bureau of Meteorology, the CSIRO and the Department of Environment and Water to inform the targets.

He said for South Australia to become a world leader in climate change, it was imperative that the state measure the effectiveness of its environmental sustainability initiatives.

“As yet, as I understand, there has not been commissioned a detailed economic study but our job is to make recommendations and to quantify and measure is very, very important,” he said.

“It’s really important that we have metrics and measures in place so we can almost have an apples for apples comparison over time so we can measure the progress that we make as a state.

“We don’t necessarily have that at the moment and that’s not unusual globally, but if South Australia truly want to be a world leader in climate change we need to be measuring our results semi-regularly.”

A report is due at the end of this year.

Haese said he would also focus on continuing work on a “directions statement”, currently being drafted by the PCCC, which will provide recommendations to Environment and Water Minister David Speirs on how the Government could increase the public’s awareness of the economic opportunities of environmental sustainability.

Haese said the statement – which he described as an “articulate benefits-based narrative” – would outline the economic return of adapting to climate change.

“What I don’t think we have quite right yet is the narrative – the shared narrative to the whole community of South Australia that explains why we’re doing what we’re doing and what the benefits are,” he said.

“I think it needs to be very benefits-based to really uncover what it is and why we need to be doing it (adapting to climate change)”.

A draft of the statement is due by the end of next month.

Speirs said Haese would bring “some fresh ideas and enthusiasm” to the Premier’s Climate Change Council. 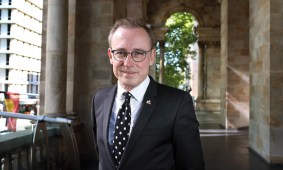 He also described the cross-government strategy a “big ticket item” that would “lead the way for others to follow”.

Haese, who surprisingly opted to vacate the Lord Mayoral post ahead of the local government elections in November last year, has also been announced as the next chief executive of Business SA.

He said he expected his two roles to work “in synergy with each other”, citing the business industry’s growing interest in climate change adaptability as driving his desire to consider the economics of climate change in his role as chair of the PCCC.