Michael Todd, the long-time operator of the cinema on Greenhill Road at Toorak Gardens, told InDaily his landlord has “absorbed the assets” of the business and it was unlikely he would be commissioned as a consultant to the future managers of the theatre, as he had hoped.

Todd’s other business, Republic Theatres Darwin Pty Ltd – which runs CMAX Cinemas Palmerston in the Northern Territory – was yesterday forced into liquidation by a judgement of the Federal Court in Adelaide.

The Australian Tax Office successfully applied to wind up Republic Theatres Darwin over what Todd has conceded were “unpaid taxes”.

The Trak has been closed for weeks, with a sign on the door saying it was undergoing renovations and would be re-opening “ASAP”.

However, Todd told InDaily this morning: “The Trak’s shut. The landlord is in control of it. Now they’re seeking a new operator.”

He said earlier in the month that he had suffered both health and financial problems recently and that he was considering handing over Trak Cinema to his landlord. 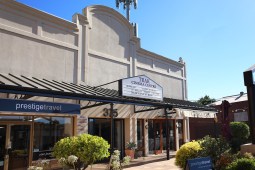 He said at the time that he would exit both the Adelaide and Darwin businesses, but hoped to act as a consultant to the Trak’s future management.

But said this morning that that’s now “unlikely”, adding that he would start looking elsewhere for a job.

“It all happened at the same time,” said Todd.

The Trak Cinema opened in the mid-1970s, specialising in art-house films.

A newsletter of the Burnside Historical Society from 2010 says the Trak was “a pioneering art-house cinema … once the only place to see European and non-Hollywood productions, but with the rise of the Nova and the Palace the audience demographics have changed”.

According to the society’s summary of the cinema’s history, Todd purchased the Trak with a business partner in 2003.