“I think what’s most interesting about a lot of the trees in the city is that when they were first planted, the city would have looked completely different to how it is today,” says City of Adelaide horticulturalist of 31 years, Mark Scharnberg.

“You can imagine what the city would have looked like in the 1800s – the roads weren’t there and the trees would have been far from the developed areas.

“Now, there’s a lot of effort put in to preserve trees from all the development that is going on to make sure people respect them and appreciate them, but development stays away from them.”

According to Scharnberg, about 6500 trees line city council streets – not including the thousands more that sprout from the city’s bordering parklands and Botanic Garden.

It’s an impressive collection and one that reflects the early European settlers’ vision for the city to be greened with an exotic range of specimens from across the globe.

According to Scharnberg, the early arborists were fans of “manicured lawns with majestic trees” – an English aesthetic that’s still present in some of the city’s park lands, including Veale Gardens and Rymill Park.

A dry and scorching climate, coupled with the fast-paced growth of the city during the 19th and 20th centuries, has since wiped out most of Adelaide’s “remnant trees”.

But Scharnberg says the introduced species have surprised horticulturalists with their longevity, with some, including the English Oaks, adapting well to the South Australian climate.

“They (the English Oaks) can live hundreds of years, so basically all we do is keep them mulched, fertilised and watered and they just look after themselves,” he says.

“During the drought in 2008, a lot of the exotic trees suffered, but luckily oaks were one of the standouts that survived really well with less water.”

Today there is a more concerted effort from the city council to reintroduce native South Australian trees, but the diversity of the city’s treescape is still evident in the approximate 60 species that feature along footpaths and in the park lands.

Below, some of Adelaide’s most devoted tree lovers – including Scharnberg, Adelaide Park Lands Preservation Association president Shane Sody and the Botanic Gardens’ collections development officer John Sandham share what they believe are the city’s most iconic trees. 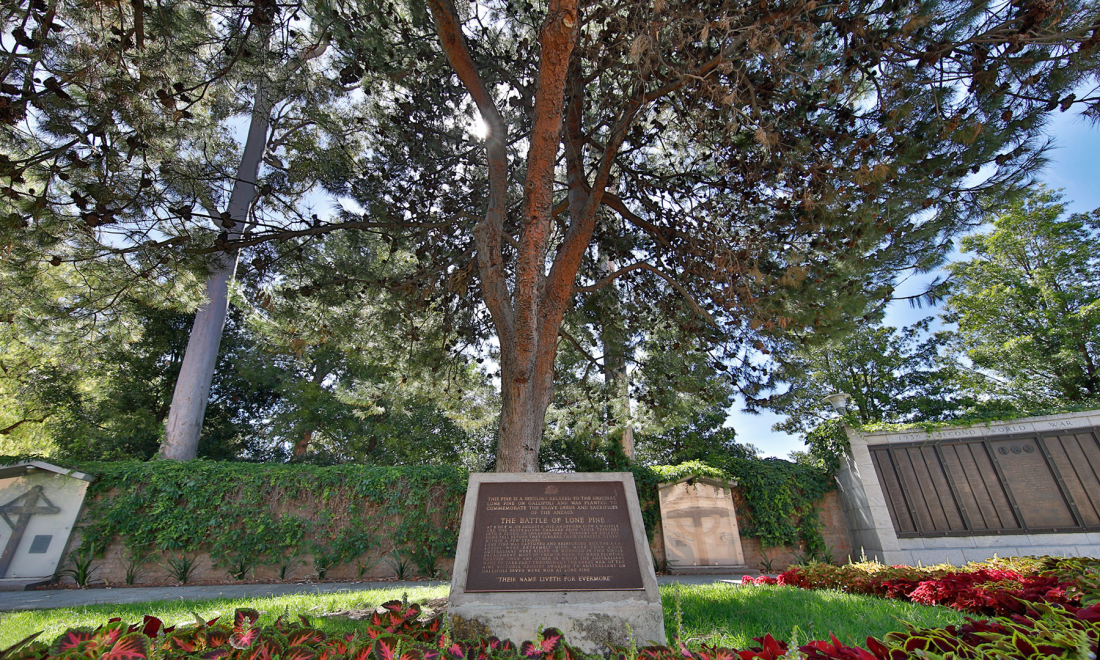 This pinus pernasta is somewhat hidden behind the grandiose National War Memorial on the corner of North Terrace and Kintore Avenue, but what it lacks in street prominence is made up in historical significance.

Planted in 1991, the pine tree grew from a seedling from the original lone pine on the Gallipoli Peninsula – a tree that witnessed some of the bloodiest fighting during World War I.

The original tree was destroyed during the fighting, but its seeds were later shipped to Australia to be planted in commemoration of the war.

“They’re planted as saplings but one hundred years later they come out to be these majestic specimens,” Scharnberg says.

“It’s about celebrating life and not death.” 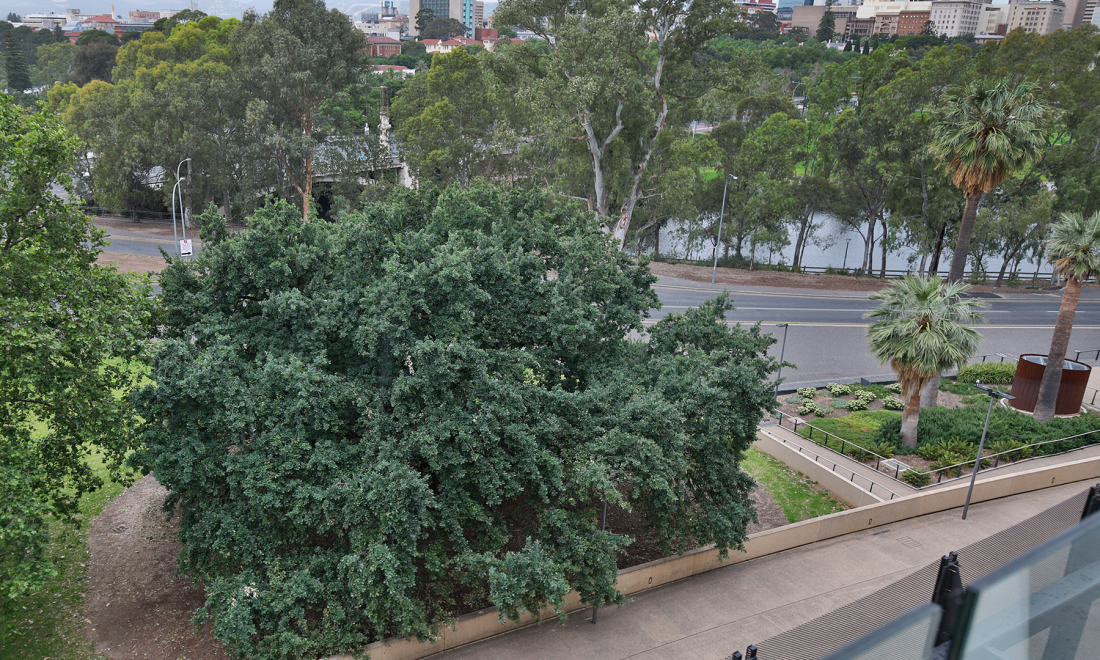 On September 1 1914, just months after Australian soldiers first landed on the Gallipoli Peninsula during World War I, South Australia’s then governor Henry Galway planted this English oak in commemoration of the soldiers who had lost their lives.

Located south of the oval in Creswell Gardens, the oak has stood the test of time – surviving both the 2000s drought and the Adelaide Oval redevelopment.

“It used to be a bit further away from the oval but when they redeveloped it, the building crept right up to it so now it sits just on the edge of the eastern side,” Scharnberg says.

“There was a lot of effort put in to preserve the tree during the build – we made it very clear that it was a no-go zone.

“It’s one of the special ones that we keep an eye on.” 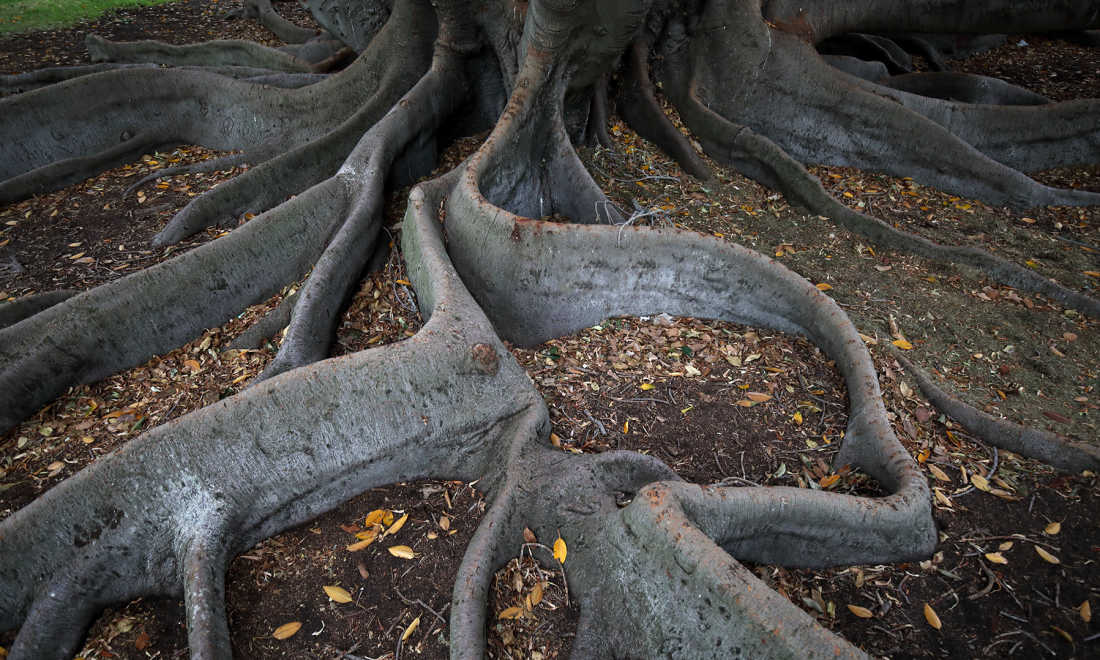 Planted in 1875, this unmarked Moreton Bay Fig – believed to be one of the first trees introduced by European settlers – is located about 100 metres east of the Memorial Oak, across King William Road, near War Memorial Drive.

Known for its sprawling buttress roots, Scharnberg says the tree is a favourite among children.

“This is probably my favourite tree because it is so majestic,” he says.

“I don’t know of any older trees that were planted.”

Moreton Bay Figs are native to Queensland and thrive in sub-tropical climates.

“They do quite well here, though, and are quite easy to maintain,” Scharnberg says. 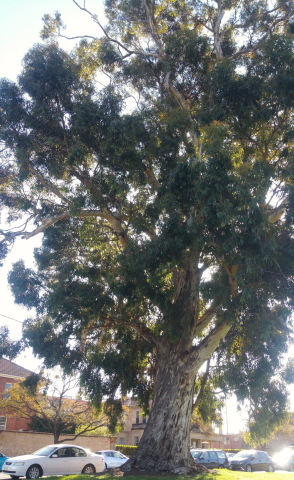 “Maybe it was their exotic look and the canopy that they provide that made the early arborists in Adelaide want to bring them down from Queensland to plant them.”

Located in Palmer Gardens just north of Adelaide Oval, this eucalyptus cladocalyx – or sugar gum – is known for its dominating size.

Dated sometime between 1870 and 1880, the native tree is situated close to the road and near the Colonel William Light statue.

“It’s such a large tree and Palmer Gardens is such a small park that the tree just dominates the area,” Park Lands Preservation Association president Shane Sody says.

“When I think of significant trees – that’s the tree that goes straight to the top.” 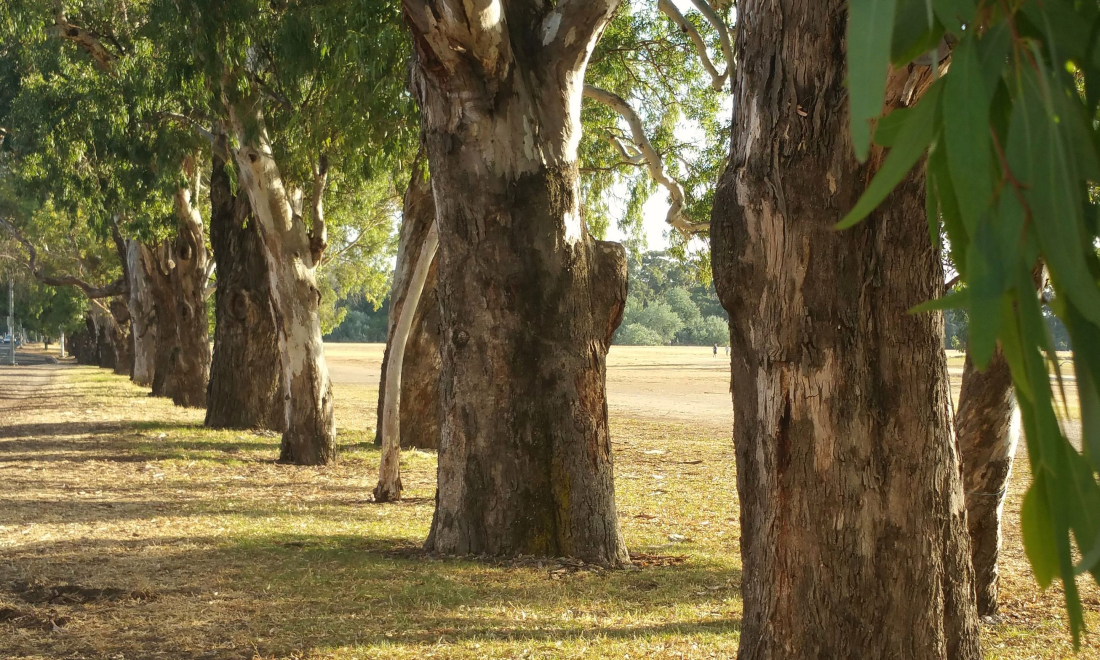 Most of them are in the vicinity of 100-years-old and are planted in what Sody describes as a “perfectly straight line”. 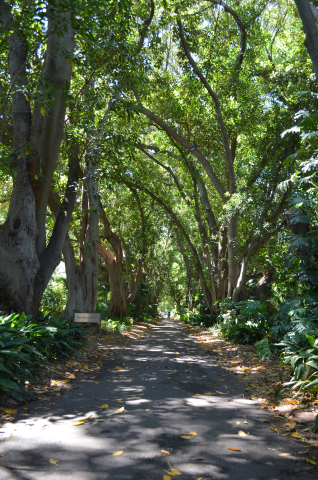 “It is such a prominent location by Victoria Park on Fullarton Road and a lot of people probably drive past them on a daily basis without even registering that they’re there,” he says.

Planted in 1866, this avenue of Moreton Bay Figs north of the Santos Museum of Economic Botany in the Botanic Garden was originally intended to extend through to North Terrace, but planning changes meant the avenue extended only part way through the gardens.

“I think this is a cathedral to the plants, if you want to put it in a romantic way,” says the Botanic Garden’s John Sandham.

“That has to be one of my top because there’s nowhere else – not even in Moreton Bay – where you get an avenue of figs like that.” 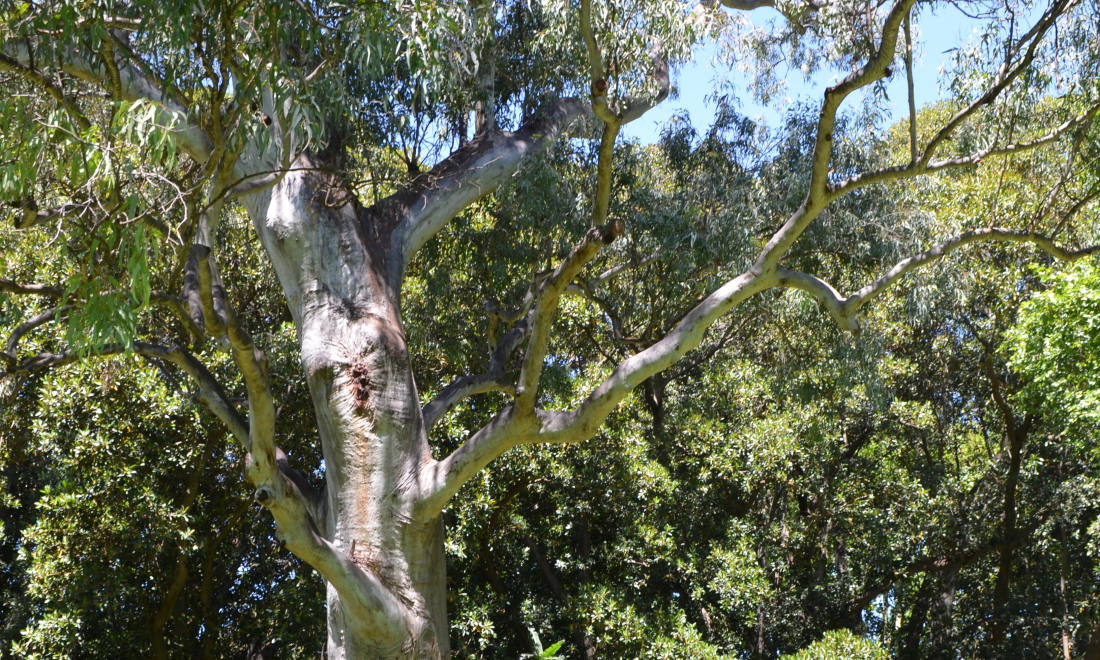 This native River Red Gum by the lower section of First Creek dates to before the Botanic Garden was established in the 1850s and is believed to be one of only two remnant trees remaining in the gardens.

Early arborists cut down most of the existing trees on the land on which the gardens are situated to plant exotic species from around the world – with many of those trees still on show today.

But Sandham says the remnant trees are now considered culturally significant and are fiercely protected. 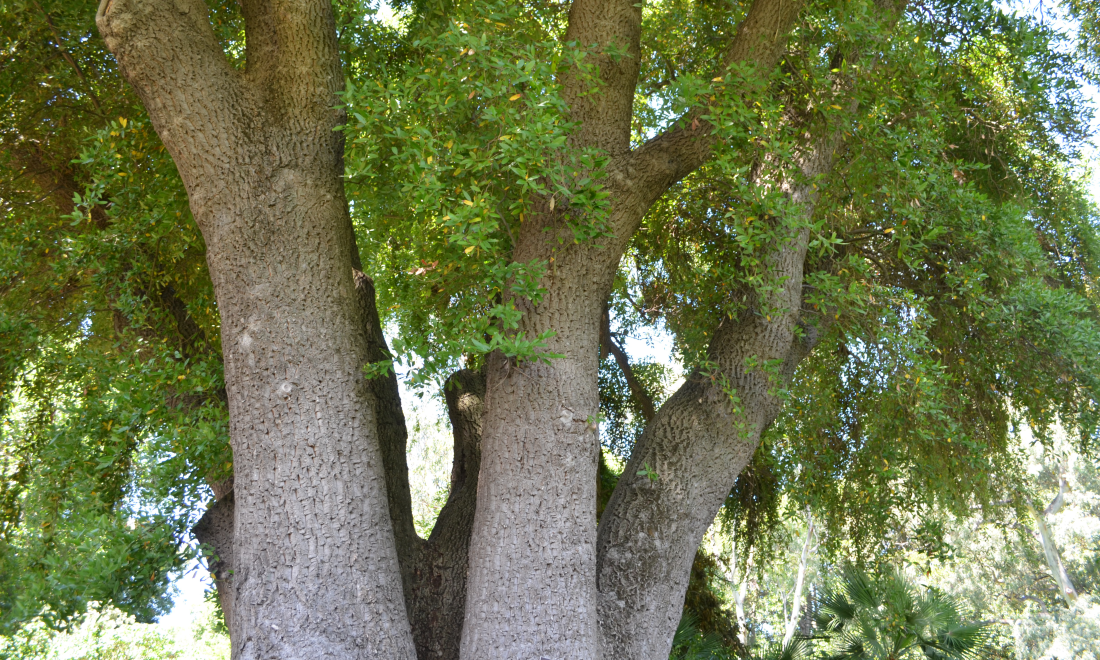 This Californian native in the Economic Garden – believed to be the only tree of its kind in Australia – reaches a height of 24 metres with a similar canopy spread.

Its leaf has a distinct bay laurel scent, but Sandham warns that smelling the leaves too much can bring on a headache.

A 1955 Botanic Garden guide lists the tree as “a superb and majestic specimen” that is “the largest tree in this area”. 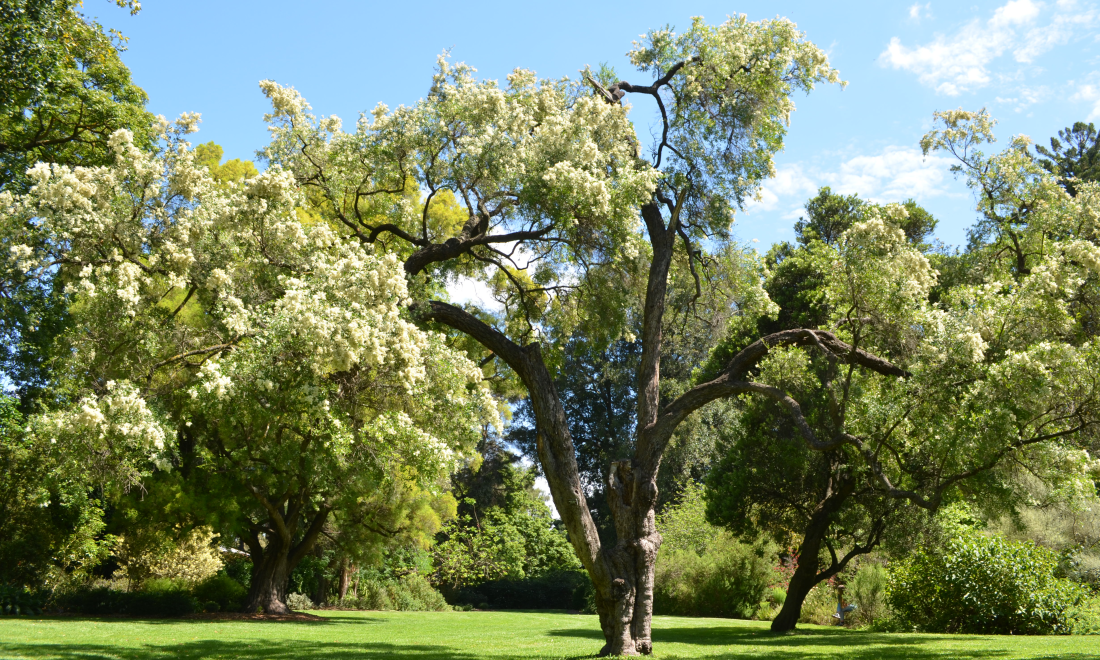 Believed to be the largest and oldest known cultivated tree in South Australia, this native Christmas Bush on Bailey Lawns was included in the Botanic Garden’s first catalogue in 1859.

Like a jacaranda, the tree blossoms around Christmas-time (hence its name), with the flowers producing a distinct scent.

According to Sandham, Christmas Bushes are not known for their longevity – often only reaching four to five metres tall – but he believes this particular tree could be a remnant plant from before the gardens were established.

“While it’s not a big tree, you’d never see one like this anywhere else,” he says.