Whetstone commissioned the Adagold Aviation private jet between Whyalla and Ceduna, costing $5797, during a regional tour to spruik the Marshall Government’s first budget in September last year, documents produced by the Opposition reveal.

The Labor Party has labelled the flight “obscene”, likening it to the “Helicopter-gate” scandal that brought down then-federal Speaker Bronwyn Bishop in 2015.

But Treasurer Rob Lucas said Whetstone was obliged to take the flight and that the Marshall Government had reduced ministerial entitlements by millions of dollars in comparison to the former Labor Government.

“While commuters are being left stranded at a bus stop or a train station Liberal ministers are splurging big on private jets, luxurious jets, to fly around South Australia to have meetings with backbenchers,” he said.

“The idea that you can be making $46 million worth of cuts to public transport … but can afford private jets, I think, is extravagant, and I think most South Australians would agree with me.

Koutsantonis said that while it was sometimes appropriate for ministers and party leaders to commission private jets using taxpayer funds, Whetstone’s trip was “unjustifiable”.

“Sometimes it can be appropriate where there are important events – when the Premier or the Leader of the Opposition are involved or where there are cabinet events,” said Koutsantonis.

“This wasn’t any of those – it’s simply unjustifiable.

“This was simply about going to a seat to try and sell the budget.”

The 455km journey would have taken just under five hours by car. 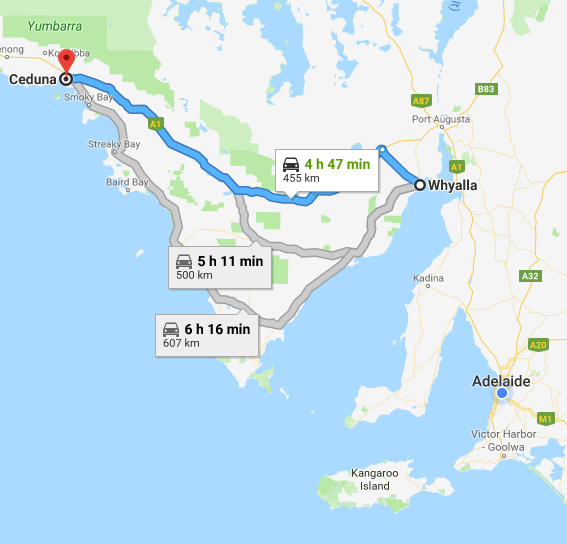 A Google Maps screenshot showing the time it would take to drive between Whyalla and Ceduna.

Koutsantonis added: “The longest meeting he (Whetstone) had there, for an hour and a half was with Peter Treloar, a backbencher – hardly a good use of taxpayers’ money.”

“Yes, he did some media in Ceduna, but his chauffeur-driven vehicle had to drive back empty from Whyalla to Adelaide, which then met him at the airport and took him home.

“He could have driven from Whyalla to Ceduna, had his meetings and then driven back – I’ve done that.”

But Lucas said Whetstone – who is currently on leave – needed to charter the flight to fulfil his ministerial responsibilities and pointed out that the Marshall Government was spending significantly less on ministerial entitlements than the former Labor Government did.

“He had to be in Kangaroo Island the next morning and the only way to get from Whyalla to Ceduna, having been through the Mid-North earlier in that particular day and then back again was to actually hire (the charter plane),” said Lucas.

“Over a period of 10 days I think he travelled to virtually every region in South Australia, and that’s the job of a minister in his particular case.

“The former Labor government didn’t see much of South Australia beyond the toll gate and Gepps Cross.”

He argued that the Liberal Party was more frugal than Labor.

“We are actually cutting in the next four years $19 million in the cost of ministerial offices – that is, overseas travel, interstate travel, intrastate travel and the number of staff in ministers’ offices,” said Lucas.

“(Koutsantonis was) the minister who – in the first four months as a minister spent $4000 on 12 lunches and dinners at the taxpayers’ expense (and) he had two of his staff travel business-class to Canada for a prospector’s conference.”