Environment and Water Minister David Speirs confirmed the three-year appointment today, a month after Haese finished his term at the helm of Adelaide City Council, which he surprisingly opted to vacate for family reasons.

He will replace outgoing chair Bruce Carter, who retires from the role after almost a decade.

Haese told InDaily he was “very much looking forward” to the new role, which he saw as “clearly articulating the economic opportunities in the whole sustainability arena for South Australians”.

“I think there’s an unrealised opportunity to clearly articulate how many of the new industries emerging in the sustainability sector will be of benefit to SA and South Australians,” he said.

“I’ll clearly play a role in climate change adaptation and mitigation, and providing informed advice to the minister… to assist in terms of articulating policy that can realise it.”

Haese put climate change policy high on his agenda in city council: he spoke at the Paris Climate Change Summit in 2015 and was a vocal proponent of the Carbon Neutral Adelaide project.

In March, environmental advocates expressed concern for SA’s renewable credentials under the newly-elected Liberal Government, particularly after Environment Department boss Sandy Pitcher – herself a former member of the Climate Change Council – became an early casualty of the new administration.

One of those sceptics was Conservation Council chief Craig Wilkins – himself a member of the Climate Change Council.

“The business case speaks for itself,” he said today.

“It feels very much like a business-as-usual focus on that transition which was underway under Labor.”

“I’ve had numerous discussions with Minister David Speirs, who I think is quite genuinely enthusiastic about sustainability,” he said.

He noted Speirs attended the recent Global Climate Action Summit in San Francisco and “came back very enthusiastic about SA’s standing globally in the sustainability arena”.

“I think the minister’s going to be adding value to this, and genuinely wants to listen to how the advice of the [climate change] council can work throughout government­ – across departments, local government and industry,” he said.

Carter told InDaily he informed Premier Steven Marshall “about three or four weeks ago” that he would relinquish the chair.

“I’ve done it off and on for 10 years… 10 years is enough, and there’s a big piece of work being done at the moment, which will extend over 18 months to two years – it’s better that they have a new chair to do that,” he said.

That work will involve a top-down audit of across-government initiatives “that support adaption dealing with climate change” and “trying to get some consistency across government [before] ultimately bringing it to the community”.

A report is due in the second half of next year.

“I’ve done most of the legwork on it already, so now it’s time for preparing the report and doing the analysis,” Carter said.

“I wanted to hang around and make sure I worked out what [the Government’s] position on climate change would be – and it’s very supportive.”

He said Haese’s appointment was “a very positive outcome”.

“He’s had a lot to do with [climate change policy], and I’m delighted he’s taking the role,” he said.

Speirs said in a statement that Haese had “a strong history in leadership and sustainability measures” through his role as Lord Mayor.

“Martin comes into the job with significant experience across a wide range of areas… he has extensive business acumen, high-level leadership experience, local government insight and has been involved with the development and implementation of sustainability measures,” he said.

“He has worked collaboratively with the State Government on climate change initiatives… the Marshall Liberal Government has a strong commitment to addressing the changing climate as demonstrated by our significant environment and energy policies, and I look forward to Martin’s contribution to these going forward.”

Haese’s appointment will reunite him with his former deputy and successor as Lord Mayor, Sandy Verschoor, who remains on the Premier’s panel, which also includes Energy and Mining supremo Paul Heithersay and Mount Barker mayor Ann Ferguson. 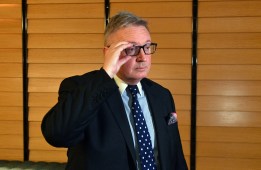 The company is developing a 4.98MW renewable energy site in Renmark in a joint bid with SA’s Enerven, involving 15,000 solar PV panels on 10 hectares of land within the Renmark Paringa Council area.

Ridgway said the project had “the capacity to provide enough energy for 2000 homes and create dozens of local construction jobs”.