Jamieson is pursuing the matter through the court, supported by ECSA, and expects to regain his seat as a result.

But another candidate who narrowly missed out in the council’s Parks ward, Nkweto Nkamba, has confirmed he also lodged a claim through the court before yesterday’s deadline.

“After the revelations that have come out in Outer Harbor, I just want to be certain and not have doubts,” Nkamba told InDaily.

“Even though I was not a candidate in the Outer Harbor ward, the unfathomable scale of error in Outer Harbor raises the question of whether errors were systemic in Port Adelaide Enfield as a whole and erodes my confidence in the electoral process at this election.”

He said the ward he contested was “the most complex ward to count in Port Adelaide Enfield Council, with nine candidates contesting three vacancies and only 79 votes separating the candidate elected and myself… after preferences”.

“I just want to be certain I missed out fair and square, not because an electoral official was too busy to follow procedures.”

Nkamba initially polled 522 votes – the third-highest primary vote count in the ward – but was beaten to the final vacancy by Kat Mitchell, who garnered 482 primary votes but won 902-823 after preferences.

Sherry last week expressed regret over the Outer Harbor debacle, telling media a polling official had failed to follow two crucial procedures, by not completing a count sheet and not reconciling the official numbers with hand-written count results.

It’s understood the official misread Wotton’s 447 votes as ‘1147’, gifting him a decisive advantage.

“I just want to be certain that procedures were followed in Parks ward,” said Nkamba, a member of the Labor Party who ran on a platform supporting a cap on council rates.

He insisted the court action was “not a ‘Hail Mary’ move”, but an attempt to ensure the processes could be trusted.

“What’s been eroded is the trust in the electoral process,” he said.

“The level of error was unimaginable, in one sense – it’s one thing to have five votes or a few votes misplaced, but the margin of the error was just too much to not question the whole process.

“Where candidates have put in a lot of work and resources, you’d expect the Commission to do its due diligence in making sure things are done correctly… I just don’t want to have doubts or questions.”

Mitchell told InDaily she was “not particularly concerned” about the appeal, noting that ECSA itself had identified its own error through a review, “which shows their audit process was working”.

“But I can understand with everything that happened last week… it’s important if he feels there’s a reason to check – absolutely, we should”.

InDaily asked ECSA if it was confident there are no further counting errors that would affect results in Port Adelaide Enfield and whether it believed trust in its processes had been compromised. 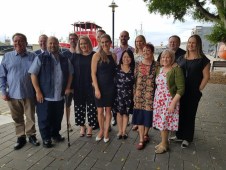 It responded with a written statement, saying: “Section 70 of the Local Government (Elections) Act 1999 allows a candidate or elector for the election to lodge a petition.”

“Electoral Commission SA will assist the Court of Disputed Returns with any petition lodged,” the commission said.