The Adelaide Sexual Health Centre on North Terrace – otherwise known as Clinic 275 – has limited its testing and treatment services to people within “priority groups”, who are at a higher risk of sexually transmitted infections, for the first time in its history.

Heterosexual people over the age of 25, without known STI symptoms and who don’t fall into higher-risk groups, have been turned away from the service, advised to consult a GP or to attend the not-for-profit sexual health service Shine SA instead. (The most common STIs – chlamydia and gonorrhoea – are often asymptomatic.)

The clinic cites increased demand as the reason for limiting its services.

InDaily understands about 30 people have been turned away from Clinic 275 each week since the policy was changed in September.

The clinic had already reduced its hours of service earlier this year.

Clinic 275 has been under pressure from increased demand since it began providing the HIV prevention drug PrEP in late 2016.

She told InDaily this morning that sexual health services in SA have been losing public funding since 2012.

“We’ve got rising STIs, we have got syphilis in a capital city … (the situation is) extraordinary and we shouldn’t be seeing this in the 21st century,” she said.

“It’s imperative that the centre prioritises members of the community that are most at risk,” the CALHN spokesperson said.

“In line with similar clinics interstate, the decision was made in September to refer heterosexual people over 25 with Medicare who are experiencing no symptoms to other services.”

However, SA Health sources told InDaily the clinic had never excluded heterosexuals over 25 as a matter of policy, and that the clinic was forced to take the decision because of funding constraints.

The number of STI diagnoses recorded in South Australia has been steadily rising over the past decade. 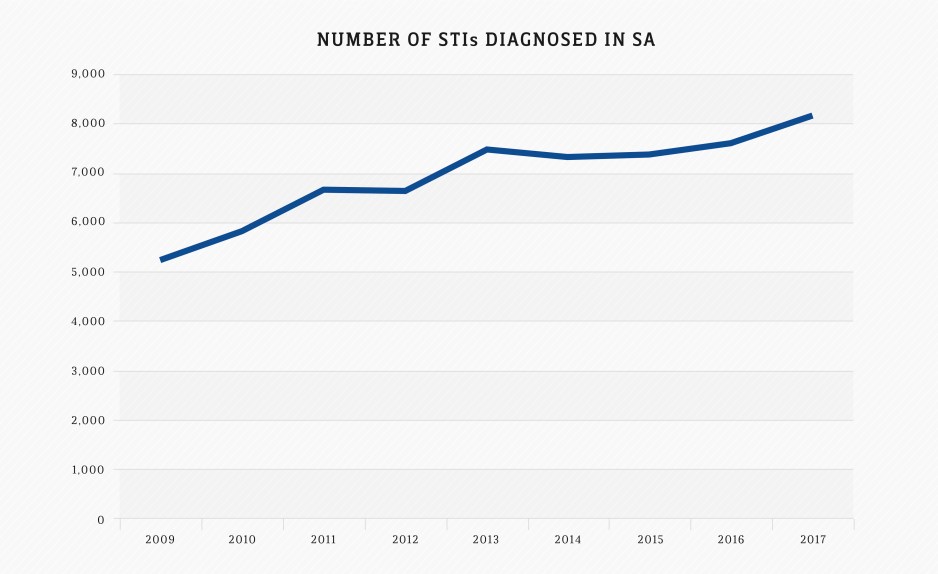 InDaily asked CALHN about Clinic 275’s funding levels, but the department was unable to provide any information on the clinic’s funding before deadline.

The spokesperson said the clinic has the equivalent of about 23 full-time staff.

“The State Government does not accept that SHINE SA needs to cut services,” he said.

“Similar services interstate are operating more efficiently and we think Shine SA can derive more revenue from Medicare to fund its services.

“For SHINE SA to announce it will close half its clinics in response to a 9 per cent reduction in funding doesn’t make sense.”

He said a significant portion of a $4.5 million annual grant funding contract with Shine SA is to provide education and training in clinical sexual health services to GPs.

“This is so GPs across South Australia are supported to provide sexual health services to their communities, whether that be prescribing contraception, inserting IUDs, or testing for STIs,” he added.