Perth-based developer Cedar Woods has confirmed to InDaily that the historic waterfront shed – known as Shed 26 or “Sawtooth Shed” – will be knocked down after studies commissioned by the company found re-purposing the building was “unviable” due to its dilapidated condition.

Renewal SA sold off a large swathe of land in Port Adelaide to Cedar Woods this year to facilitate the development of new residential precincts “North West” and “Fletcher’s Slip”. Shed 26 is located on the “Fletcher’s Slip” site.

A spokesperson for Cedar Woods said in a statement to InDaily that while the company would retain State heritage-listed buildings on the Fletcher’s Strip site, Shed 26 was not a listed building.

The spokesperson did not say when the building would be demolished.

“All other State heritage-listed buildings on the Fletcher’s Slip site that Cedar Woods has purchased will be retained, restored and adapted for future use and enjoyment.”

But a Port Adelaide architect has told InDaily the building could be repurposed into a cultural, commercial or residential site.

Mulloway Studio partner Anthony Coupe said while the brickwork in the circa-1950 building was “light-weight” and “crappy”, the building’s steel framework was “very robust” and could be retained.

“The building’s presence and size are the qualities which really give it its significance,” Coupe said.

“We could put a whole range of activities on the site – offices, commercial stuff, cultural stuff for example.

“We could have a fish market as well as some sort of short residential spaces like hotels or restaurants.”

Coupe has published a series of mock-up designs for what Shed 26 could look like if it was repurposed.

He said while the building’s internal space would have to be re-configured, the steel frame could be preserved.

“We realise that it could be considered a rather lumpy and inelegant structure in some ways but the internal spaces are fantastic and its presence important in the urban legibility,” he said.

“There’s plenty of examples of industrial buildings being repurposed in this way, just look at Tonsley or Plant 4, which have become really interesting spaces.” 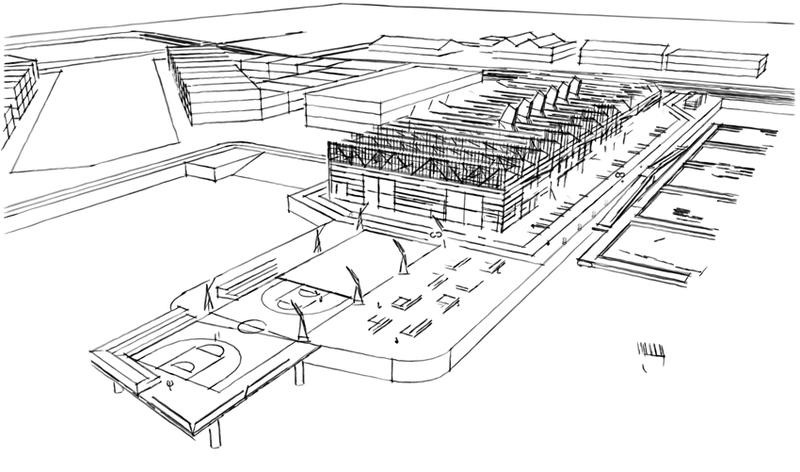 A spokesperson for Renewal SA said the government agency had engaged Cedar Woods and design consultants to investigate if Shed 26 could be reused or repurposed.

According to the spokesperson, the work involved in bringing the building up to a standard to meet current code requirements would cost an estimated $8 million.

Port Adelaide National Trust founding member Tony Kearney said he had been fighting for years for Port Adelaide’s historic boat sheds to be saved from demolition.

He described Shed 26 as a “beautiful structure” with “lots of potential” to be repurposed.

“It’s this massive iconic building that just tells you are in the Port and really speaks of our cultural identity.”

“When you take it away and just put these modern buildings up, it doesn’t tell you the Port’s story at all.”

Kearney criticised the State Government’s handling of the site, saying it had not put enough protections in place to prevent the demolition of culturally significant buildings on the development site.

“It [the building] has just got so much potential, but it’s been completely ignored by the Government,” he said.

“They basically should have quarantined it when they sold the land to Cedar Woods so that building could be taken on by someone who has imagination and could do something interesting with it.”

Vitalstatistix director Emma Webb, whose arts organisation is based in Port Adelaide, said the decision to demolish Shed 26 was “crazy”.

“It should be compulsory for heritage buildings to be included in plans – whether they’re listed or not – and for developers to take seriously the consultations that have been going on for years with people in the community who have wanted buildings [such as Shed 26] to remain,” she said.

“We had really significant boat yards taken away along Jenkins Street in 2009 – a whole road of boat sheds just destroyed to make way for new developments.

“There are plenty of examples around the world about how wharfs could be incorporated into waterfront developments to enhance the look of the area and to retain the place’s connection to its history, so I don’t see how the same couldn’t also be applied to Port Adelaide.”

Renewal SA said with all developments it “extensively assessed the options for retaining existing vacant buildings for adaptive reuse, including the urban renewal potential within the planning and heritage guidelines”.

“All existing state-heritage-listed buildings in Port Adelaide will be retained, restored and adapted for future use and enjoyment,” a spokesperson said.