Former health and arts minister Hill, the chair of the SA Film Corporation board, will vacate his role when his term expires next month.

Premier Steven Marshall said in a statement Hanlon’s work within the film industry, “combined with decades of experience across multiple advisory positions make him highly suitable for this role”.

Hanlon told InDaily it was an “exciting opportunity” and he would “bring to the Film Corp a life-long interest in film, a more recent activity in film and my commercial background as well”.

“I think the Film Corp has performed incredibly well and gone from strength to strength. I hope to continue that… and as much as I can improve on it” he said.

“I want to see more films made in SA, more film-makers employed… we have some really good people in the industry [and] we’re going to attract a lot more work here in the future.” 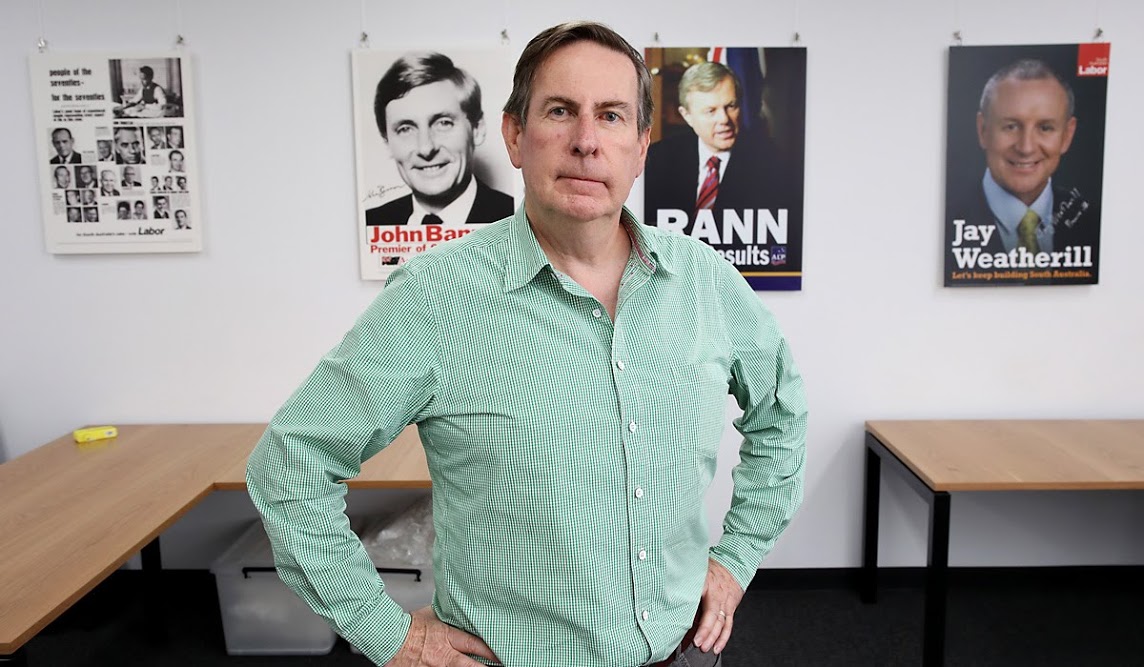 Peter Hanlon during the making of an as-yet-unfinished documentary on the March state election. Photo: Tony Lewis / InDaily

Entrepreneur Anton Andreacchio, named as one of InDaily’s inaugural 40 Under 40 winners earlier this year, will also join the board. Andreacchio is the founder of Convergen, a digital agency that specialises in visualising major infrastructure works, including the Adelaide Oval footbridge, Darlington Interchange, the O-Bahn City Access tunnel and OZ Minerals’ Carrapateena project.

Veteran broadcaster and Advertiser columnist Goers will finish his tenure on the Adelaide Festival Corporation Board, having served almost eight years of a maximum nine-year term.

Rather than re-appoint him for the final year, the Government has opted to replace him with the Australian National Academy of Music chairman Ian McRae, who has been appointed for a three-year term.

“My time was up,” Goers told InDaily.

“I’ve been very honoured to have served on it and the Festival Centre Trust [but] my time had come… it’s time for someone else. There’s no rancour or disappointment.”

Hill said he had offered to carry on but that he was “relaxed either way”.

“[I told them] it’s up to them…I was prepared to carry on if they wanted me to,” he told InDaily.

“If they chose to go elsewhere, that’s up to them… it’s absolutely their call, I don’t think it’s driven by a political agenda.”

Marshall said the Adelaide Festival Board had “greatly benefitted from the work of Peter Goers, who has championed the arts in South Australia for his entire career”.

The changes come as the Government today appointed seven new members to a newly-commissioned board to oversee the strife-torn Central Adelaide Local Health Network – to be chaired by business supremo Raymond Spencer.

The Government insists the new board will “lead the recovery of the Royal Adelaide and Queen Elizabeth hospitals”, acting in an advisory capacity until the all health network Governing Boards become fully operational next July.

“The Royal Adelaide Hospital is on the cusp of operational, organisational and financial recovery – this is an urgent project of state significance,” said Health Minister Stephen Wade.

“The board brings together strong health, management and financial expertise… a health network with an annual budget of more than $2 billion must be rigorously responsible in its financial management but CALHN has been consistently underperforming when compared to its interstate peers.”

The Liberal Government has appointed administrators KordaMentha to work through CALHN’s “wasteful and unsustainable” cost overruns of more than $300 million.

“With the imminent release of KordaMentha’s work, it is critically important to accelerate this appointment of the CALHN Transition Board,” Wade said.

Spencer chairs several boards, including the South Australian Health and Medical Research Institute (SAHMRI), the Global Centre for Modern Ageing and the South Australian Venture Capital Fund. He previously chaired Labor’s powerful Economic Development Board, which was scrapped by the incoming Marshall Government.