Candidates listed in both “Team Verschoor” and “Team Hamilton” – and some not nominated – have labelled this year’s council elections as divisive and riddled with factional politics following a story published in today’s Advertiser, which lists the candidates Hamilton and Verschoor believe should join them on the council.

Hamilton is quoted as describing his list of endorsed candidates as providing a “mixture of sitting councillors with vital experience, offering themselves for re-election, and some new candidates who look well-suited to make a significant contribution”.

But one of Hamilton’s endorsed candidates – south ward contender Helen Donovan – told InDaily that she has only spent about 20 minutes with Hamilton during the campaign, during which time endorsement was never discussed.

She said while she thought it was “lovely” that Hamilton had chosen her as one of his preferred candidates, she opposed what she said was a “dramatisation” and “disappointing factionalisation” of this year’s local government elections.

“I’m completely independent and I don’t seek endorsement from anyone,” she said.

“I align with Mark on heritage protection and I support Verschoor in her support for fighting climate change.

“It’s disappointing to see this characterisation of there being some division, some factions among candidates.”

Abiad had told her, she said, that with enough candidates swapping preferences – 19 is apparently the magic number – the outcome was relatively “assured”.

She told InDaily she was uncomfortable with the approach and decided against joining the group.

Donovan told InDaily today that the “narrative” in today’s story was “a convenient way to endorse the existence of Team Adelaide”.

“They have created fictional endorsement teams to legitimise the existence of Team Adelaide,” she said.

“Those who were part of Team Adelaide, they now have a way of legitimising their part of that team through these new factions – Team Verschoor and Martin.”

Staunch independent central-ward contender Remo Russo, who was not listed as one of Verschoor or Hamilton’s endorsed candidates, also alluded to the similarities between Team Adelaide and Verschoor and Hamilton’s lists, saying they would influence people to vote for certain people.

Russo said he had been approached to join Team Adelaide, but he said he would only be prepared to reveal details of the group after the election.

“I just don’t want to harp on about it right now because if we keep on at it people won’t want to vote,” he said.

“I never joined a group last time and I won’t join any group this time around.”

Russo said it was disappointing and unfair that Verschoor and Hamilton had revealed their lists of preferred candidates.

“What is this? It’s not Crows versus Power – it’s a council election,” he said.

“It’s influencing people to vote for only certain people and just to forget the candidates that aren’t part of the teams.

“We should be talking about the real issues of council, not who’s on who’s team.”

Houssam Abiad listed Russo as one of his endorsed candidates, but Russo said he remained “completely independent” and unaligned with certain groups or political parties.

“That just happens when it gets close to the time (of the election), that’s when you start seeing people like Houssam putting out these names of people he endorses because he is thinking that he wants others to support him so he puts their names down,” he said.

“Just watch, some will start to jump ship once they see which candidates are proving to be more popular – they will change who they align themselves with.”

Verschoor-endorsed area councillor candidate Stephanie Johnston said she was aware that Verschoor had endorsed her, but she said she remained an independent candidate.

Johnston said this year’s council elections had played out in a “strange way”.

“I think people are wanting councils to come together to work with everybody – it’s not about the separate teams,” she said.

Fellow Verschoor-endorsed candidate Robert Simms also distanced himself from Verschoor’s list, saying he was not standing as part of any faction or team.

“I knew that Sandy was going to (be) promoting me and I really appreciate that and obviously we line up on lots of different issues, but I guess I don’t see this as being a Team Verschoor versus Team Hamilton election.

“I think there are lots of candidates that are running mentioned in both teams and some that aren’t endorsed by any lord mayoral candidate at all.

“I’ll work with anybody to achieve outcomes.”

Simms, who is running in his second council election, said this year’s campaign had been more divisive.

“But, whatever the outcome of the election, the council will have to work together across a broad range of stakeholders and reflect the diversity of our city.”

InDaily has asked Sandy Verschoor for a response, but she did not get back to us before deadline.

North ward candidate Valdis Dunis, who was not endorsed on either list, took to Facebook to express his view that the “tribal” nature of council was not a “good thing for deciding things at the council level”.

He added he was proud to be considered neutral and unaligned “by most candidates”.

But Dunis’ post was highjacked by Verschoor-endorsee Rick Carter, who said the campaign was “hardly tribal” and that the media is to blame for fuelling candidate factions.

“The two main candidates have nominated the people they would like to work with for a variety of reasons. The media branded it as Teams,” Carter commented.

“I generally support the Liberal Party and attend their business events.

“I was pleased to be asked to work with Martin Haese and now Sandy….and I know there are people who now proclaim independence etc that were desperate to be on Team Haese ..
I seek out the best people who play by the rules. … and give them my support until they prove unworthy…”

Carter later added: “And there is some suggestion here I assume that this grouping is something more than a bunch of individuals that share some views and visions that are mostly in sync with Sandy. Its no faction there are no membership fees or rules …just very diverse backgrounds and a willingness to share ideas for the betterment of Adelaide.” 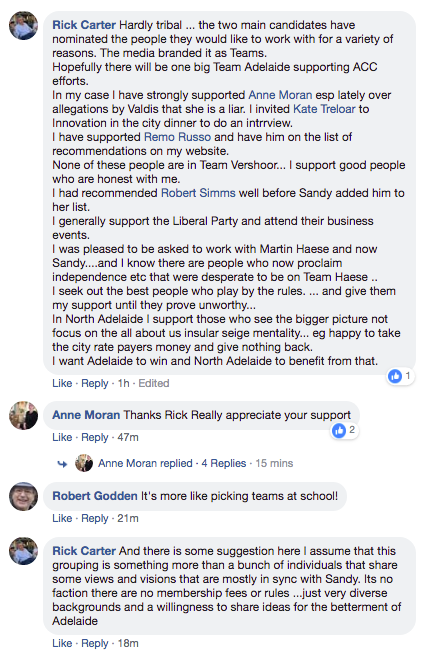 “However, we want to see this figure grow, and are encouraging all eligible voters to find out about their local candidates and have their say,” she said.

“Voting only takes a couple of minutes, and provides the best opportunity to influence the future of your community.”