The SA Electoral Commission says it’s just adhering to legislation by sending back “dozens and dozens” of biographical snapshots lodged by candidates – to be distributed by the commission when it sends out official postal ballot packs – requiring them to be amended because they contain political “comment”.

The bio of one aspiring mayor, Onkaparinga cleanskin Erin Thompson, was so heavily vetoed it prompted a complaint in state parliament, with Labor MP Leon Bignell railing against what he claimed was “extraordinary censorship by the Electoral Commission of SA”.

“This should disturb anyone who has any sense of fairness around the democracy we live in and the right to freedom of speech,” Bignell said. 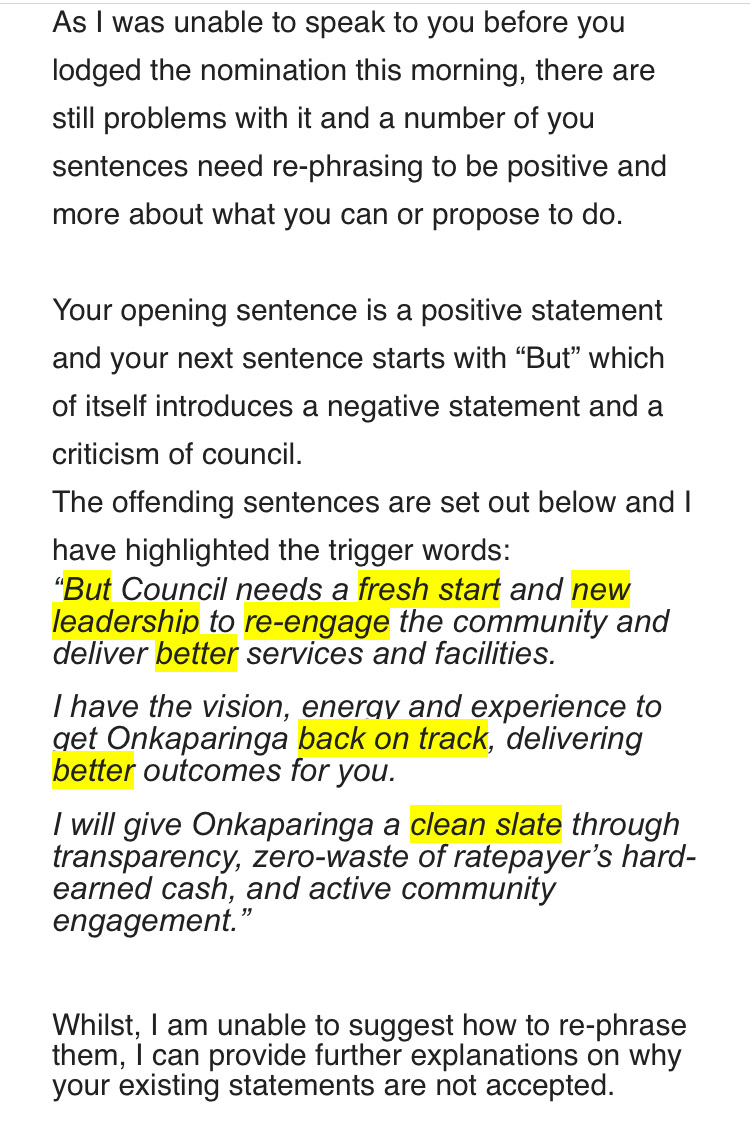 An email from ECSA detailing the offending passages of Thompson’s bio.

But while one Labor MP is demanding greater transparency around candidates, a former Labor MP is shaking his head after his request for policy information from a prospective Marion mayor was rejected because the candidate didn’t “have the time”.

Via text message, they sought information about his position on a council-owned recycling facility and whether he had a view on the national Australia Day debate, with several councils refusing to hold citizenship ceremonies on January 26.

Westwood sent the following reply: “Hi Mrs Burrows. As much as I like to chat to residents, I’m sorry, I do not have time to continue a single conversation , but if I am voted in as Mayor, I will be happy to listen to your suggestions further, and may, act on this issue even without reminding. It is certainly of interest to me. Regards Nick 2018/10/18” 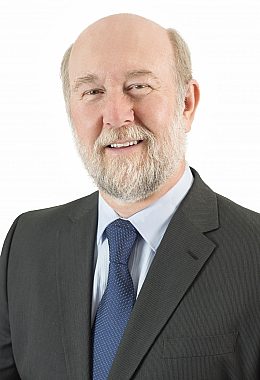 Westwood told InDaily he “couldn’t afford the time writing to one person” and “I don’t have any apologies for that”.

“I tried to be as nice to her as possible, but there are limits… I think we had about two or three ‘tos and fros’, but I just haven’t got the time to be sitting there texting someone for the third or fourth time.

“I’m still getting around the place and doing a bit of my campaign – I haven’t got time to spend it all with one person.”

Westwood said “at least one other person” had sought a written response to a policy question, which he had also refused.

“Most people realise it’s a bit difficult to be having a long conversation or correspondence with a candidate, so they don’t – they don’t come to me, which is fine,” he said.

“I’m happy to talk to anybody but I can’t spend a lot of time talking to one individual… I do try and state my position, but not extensively.”

Asked whether he had received many inquiries to the contact number included on his election material, he said that some people had texted questions, and “I’ve texted something brief back”.

“People have rung, and I give them a brief answer, and put my position,” he added.

Westwood suggested he would be better off being elected first before addressing specific inquiries, so that he is in a position to “do something about it”.

“They can see from both my material and my response that I’m interested generally, but obviously I’m not going to do something about it right this minute if they bring up a subject – if I’m not elected, there’s not much use talking about it now, is it?” he said.

After a few minutes of questioning, Westwood reminded InDaily that “I’ve got a lot to do today”, and referred our attention to his published material, including his 21-minute YouTube video (see below).

Mayes said it was “hard to vote for him on this response”, noting that neither query had been addressed.

“I can’t imagine I would have won the Unley Aldermanic Council elections in 1978 if I’d adopted that approach, and I’m bloody certain I would not have won preselection in 1980, or [the state seat of] Unley in 1982 with that approach,” he said.

“I spent my life talking to voters… no wonder the punters have lost faith in democracy.”

Mayes said he and his wife had also sought answers from a local ward candidate, and “the contrast was stark, I must say”.

“Why put your number there if you don’t want contact?” he said.

The furore over Thompson’s redacted bio, meanwhile, prompted Bignell to write to electoral commissioner Mick Sherry calling for an apology, and demanding her original bio is published “in full”.

However, ECSA spokesman David Gully told InDaily the commission was merely applying a law that has covered every local government election since 2000, when it was introduced by then-Liberal Local Government Minister Mark Brindal.

“We have to run the election under the rules.”

He said the Act was introduced in 2000, “when postal voting first came in, and a postal ballot requires a candidate to contribute a profile under the regulations”.

But the Act stipulates candidates “can’t comment on any decision or actions” of the current or former councils.

“Comment is taken to mean a criticism, value judgement or endorsement,” Gully said.

“These candidate profiles that go out in the ballot pack need to be seen to be not positively endorsing or criticising actions or decisions of current councils or previous councils.

“Candidates can say what they like [within the Act] in their own material.”

He said Thompson was far from the only candidate whose bio had to be resubmitted, suggesting “dozens and dozens” were sent back each election.

He said a common correction was to rectify bios that exceeded the 150-word limit, noting that under law the commission would be forced to “just truncate it” if they did not come in under the word limit,

“It would stop mid-sentence,” he said.

He said if ECSA did not enforce the legislation, a bio that transgressed the regulations would invalidate a candidate’s nomination.

“It’s not meant to be a political campaigning document – it’s meant to be biographical,” he said.

“It’s intended to introduce yourself to the people and say a bit about who you are.”

Brindal told InDaily the idea of the bio, which is provided as part of he electoral process, “is information, not proselytising”.

“If they want to advertise, they can… but if a level of government is paying to distribute material for you, it shouldn’t be propaganda,” he said.