The council’s Audit Committee determined late last week that divesting from banks that are aligned with the fossil fuel industry would have “minimal” impact on the council’s finances where there is a competitive rate of return.

Council will vote on the proposal after next month’s council elections, with one Lord Mayoral candidate saying she would be surprised if the future council did not adopt the policy.

Audit committee member and incumbent north ward candidate Phil Martin, who moved the original motion in August calling for the council to divest from fossil fuels, said the endorsement would give “comfort to any of the naysayers who have opposed this all along”.

“The council administration has assessed all of the possible impacts to our bottom line and it compared in doing so the experience of other councils and came to the conclusion that it was a doable outcome,” he said.

“Committees of this nature do not make decisions that are risky – these committees are about strong financial oversight.

“It is possible for this council to divest of institutions and instruments which encourage investment in fossil fuel, without causing any substantial impact to any of our financial activities.”

Interstate councils, including the cities of Sydney, Newcastle and Hobart, have already introduced fossil fuel divestment policies in their treasury guidelines.

Adelaide City Council administration has confirmed that the council does not have any direct equity interests in fossil fuel-related companies or corporations, but its banking partner – National Australia Bank – has been linked to fossil fuel investments.

In November last year, NAB announced that it would review its support for fossil fuels and diversified miners that do not have a strategy to move away from coal.

A month later the bank said it would no longer back new thermal coal mining investment, but it continues to support customers across mining and energy, including those with existing coal assets.

“There are plenty of well-rated banking institutions to which this council and other councils can turn,” Martin said.

“Our own merged Adelaide Bendigo Bank is one organisation which is suitable because it does not invest in fossil fuels or provide support to companies working in that area.

“If we ended up going with a local bank it’s not such a bad outcome anyway.”

Lord Mayoral candidate Kate Treloar, who has pledged to consider the environment in every council decision or policy if she is elected, said she would be surprised if the council did not vote to include fossil fuel divestment in its treasury policy.

“There is a pretty good group that are running for council this year so I would be surprised if it didn’t go through,” she said.

“I would be very disappointed if it didn’t because this would be sending a signal that we need to start looking at reducing our carbon footprint.”

Rival candidate Sandy Verschoor has also declared her support for fossil fuel divestment, telling InDaily last week that she would hope to implement the policy at city council level before bringing it to the Local Government Association’s attention.

Councillor Anne Moran, who in August expressed doubt at the cost of divesting from fossil fuels, today said she had confidence in the Audit Committee’s endorsement of the policy.

“At the time we didn’t know what divesting from fossil fuels really meant and so we thought it would be foolish to rush into it quickly, but the Audit Committee is a conservative committee so I would be satisfied if it had passed it,” she said.

But Moran warned against other “headline-grabbing” environment proposals put forward by some candidates – including Martin’s call for the council to develop a plan to phase out the council’s fossil-fuel powered vehicles.

The council already has a draft plan into zero and low emissions vehicle procurement, which outlines a staged replacement timeline up to 2030, but Martin argued that plan does not contain enough detail.

“It’s not difficult,” he said.

“One has to be responsible about the approach that’s taken to replacing the fleet of cars and vehicles that undertake council activities – you simply can’t sell them all off and purchase brand new equipment the next day.

“But council haven’t even got a plan that’s been presented to the elected body demonstrating how we will exit from the current fossil fuel-powered fleet.”

Moran said the council could look at replacing its vehicle fleet with hybrid cars or replacing just some of the cars in order to get “more bang for its buck”. 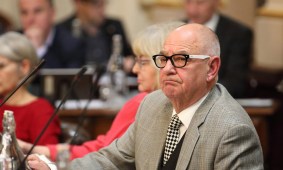 “We really need to start looking at the money that we’ve got – looking at ways to spread it thin,” she said.

“I don’t disagree with the ambition of fossil fuel divestment but we need to afford it in order to do it.”

The Local Government Finance Authority last week recommended its members vote against a motion calling on it to divest from fossil fuel-related investments, stating to do so would be “negligible” in its impact.