Stephan Knoll this week incited concern in the local government sector by describing the forthcoming council elections as a “referendum” on rate-capping and urging rate-payers to back candidates who supported his contentious policy.

InDaily can reveal his father Franz, owner of the popular Barossa Fine Foods smallgoods chain, intends to run as a candidate for the Adelaide City Council – and does not oppose rate-capping.

“I’ve got no problem with a rate cap,” he told InDaily this morning, arguing councils should be able to fund necessary services with rate increases capped at CPI, and noted that there were “mechanisms” in the Government policy allowing for rate increases in extraordinary circumstances.

“I do believe that there are mechanisms where any specific projects (can be funded).

“We don’t need to have rates (higher) than CPI.”

His son told Adelaide Now earlier this week: “The upcoming council elections should be a referendum on rate-capping”.

“I would urge SA ratepayers to support candidates that support rate capping,” he said.

The minister told InDaily this morning: “It’s a bit rich for councils to claim it’s inappropriate for me to urge South Australians to support candidates who support rate-capping, when they spent hundreds of thousands of dollars campaigning against the Liberals at the last state election on this very issue.”

“I think dad is big enough and ugly enough to look after himself without any help from me … it’s no secret that we don’t see eye to eye on a few issues, especially shop trading hours,” he said.

“I’ve been urging candidates of all political persuasions to support rate-capping.”

Knoll senior, who also ran for council in 2015, told InDaily this morning that both he and his son hold independent views, and that if he is elected, he would consider issues on their merits, whatever his son’s views.

“I stand for things that I believe in,” he said.

“If they are different to what the Government believes in, well, fantastic. 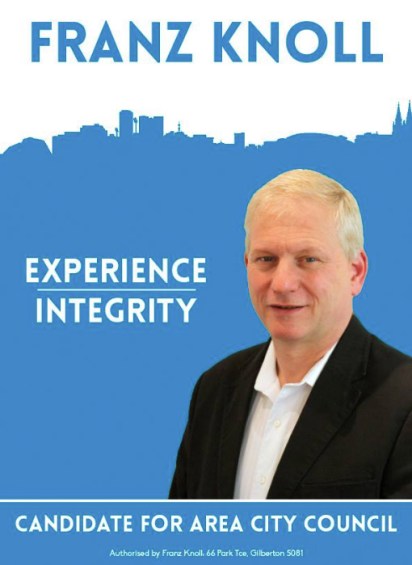 “He (Stephan) has integrity and he tries to make sure that everything he does is correct and not compromising.”

Franz Knoll pointed out that he had publicly criticised the Government’s shop trading hours deregulation policy – but said that his policy aspirations for the city would require better cooperation with the Government.

He told InDaily this morning that deregulation would threaten small- and medium-sized businesses, such as his own.

“If we have to be open longer it just costs too much to run your store,” he said.

“All of our stores aren’t massive.

“If we’re not careful it’s a South Australian business that will die.”

Asked if Barossa Fine Foods may suffer or fail if trading hours deregulation becomes law, he said “all these sorts of things can happen”.

He argued that South Australian businesses were more vulnerable to increased competition than businesses in the eastern states.

“If we want strong businesses we need to balance the competition … it needs to be managed.”

Knoll said he was leaning towards running as an area councillor at the November elections, rather than as a candidate in the central ward, where his Central Markets Barossa Fine Foods business is based, because it was likely to give him a better chance of success.

“(I am) trying to gauge where is my best opportunity,” he told InDaily.

“I’m hopefully banking on the fact that enough people know me in the area.”

He said his policy aspirations for the city of Adelaide included achieving better coordination of roadworks, events and projects so that commuters feel it is easy to come into the city.

He said that aspiration might require the cooperation of the State Government in timing major building projects in a way that doesn’t discourage people from coming into the city to shop, including at the Central Markets.

“It’s about working better with the government,” he said.

“Road works and events … impact on people coming into town … access to the city is critical.”

He said he no-longer uses South Road because “it’s just a building site and it’s just too hard” and lamented that the closure of Victoria Square for its upgrades during the last city council term had seriously impacted Central Market traders.