The redevelopment, originally costed at $7.85 million, would have seen the highly trafficked Rundle Mall offshoot raised to a single level as a mixed use footpath for pedestrians, cars and cyclists, with new paving, large trees and arbours, seating and outdoor dining facilities between North Terrace and Grenfell Street.

Construction was due to begin in January this year and be finished well before this year’s council election. Ballots go out in October.

But the project is now “profoundly over-budget” and the council’s administration is racing to produce new designs, ready for sign-off, before the council enters caretaker period, in September.

He said the council would have been financially irresponsible to continue with the project at the new cost.

The newly revealed cost of the original design remains a commercial secret, as does the identity of the company or companies involved in the redevelopment. 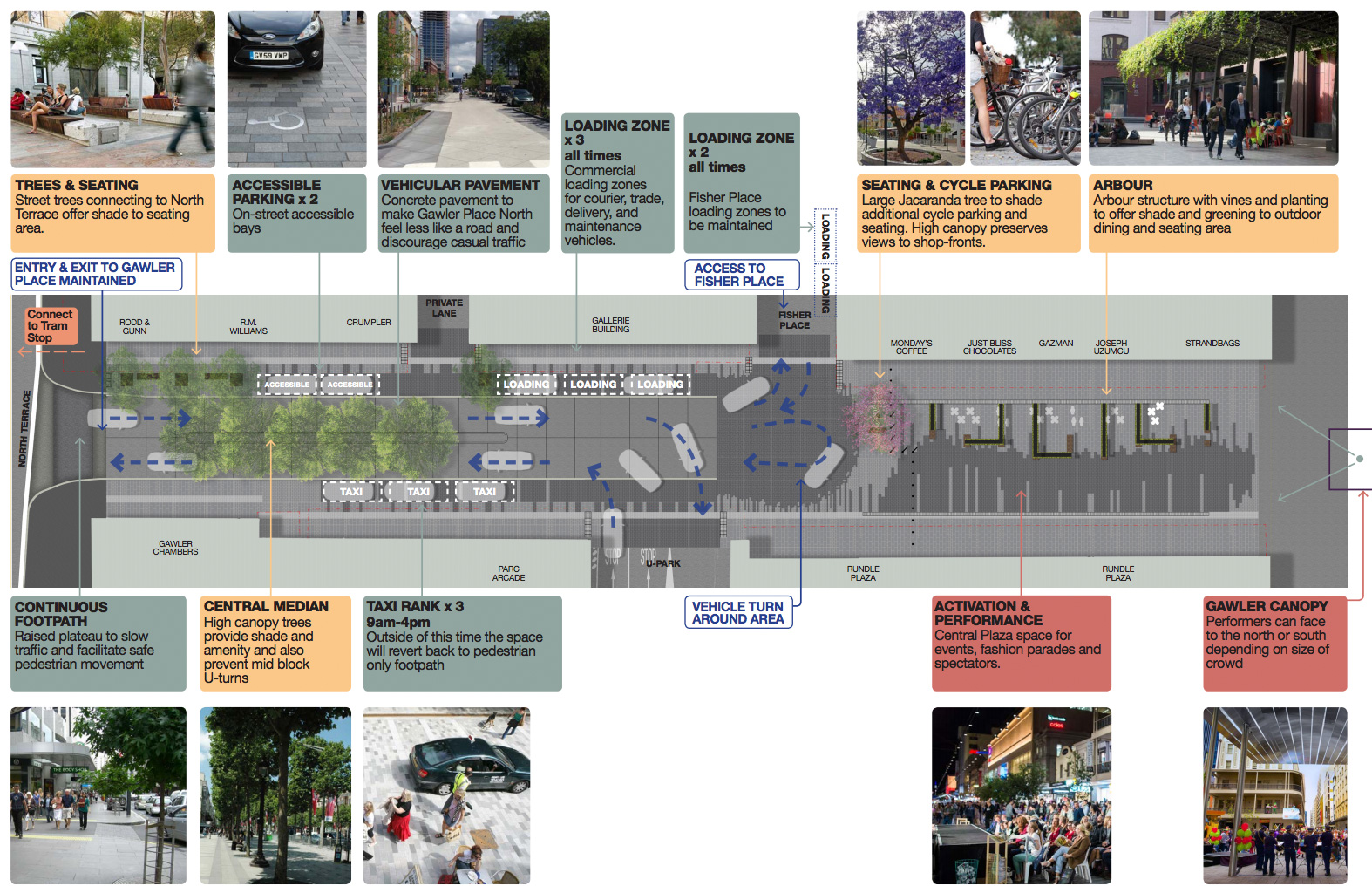 The original upgrades planned for the northern end of Gawler Place.

Speaking to InDaily this morning, councillors described it, variously, as a figure that would “have you shaking at the knees”, as “well beyond” a normal project cost blowout and as “unacceptable”.

Haese said council staff had had “a reasonable idea of the complexity of the underground works, but what they actually discovered was considerably in excess of what they thought was there”.

“My view is that it would just be financially irresponsible to proceed.”

Asked whether ratepayers would have expected the council to be comprehensively across what was underneath Gawler Place before beginning the project, Haese told InDaily: “I of course had had the same thought”. 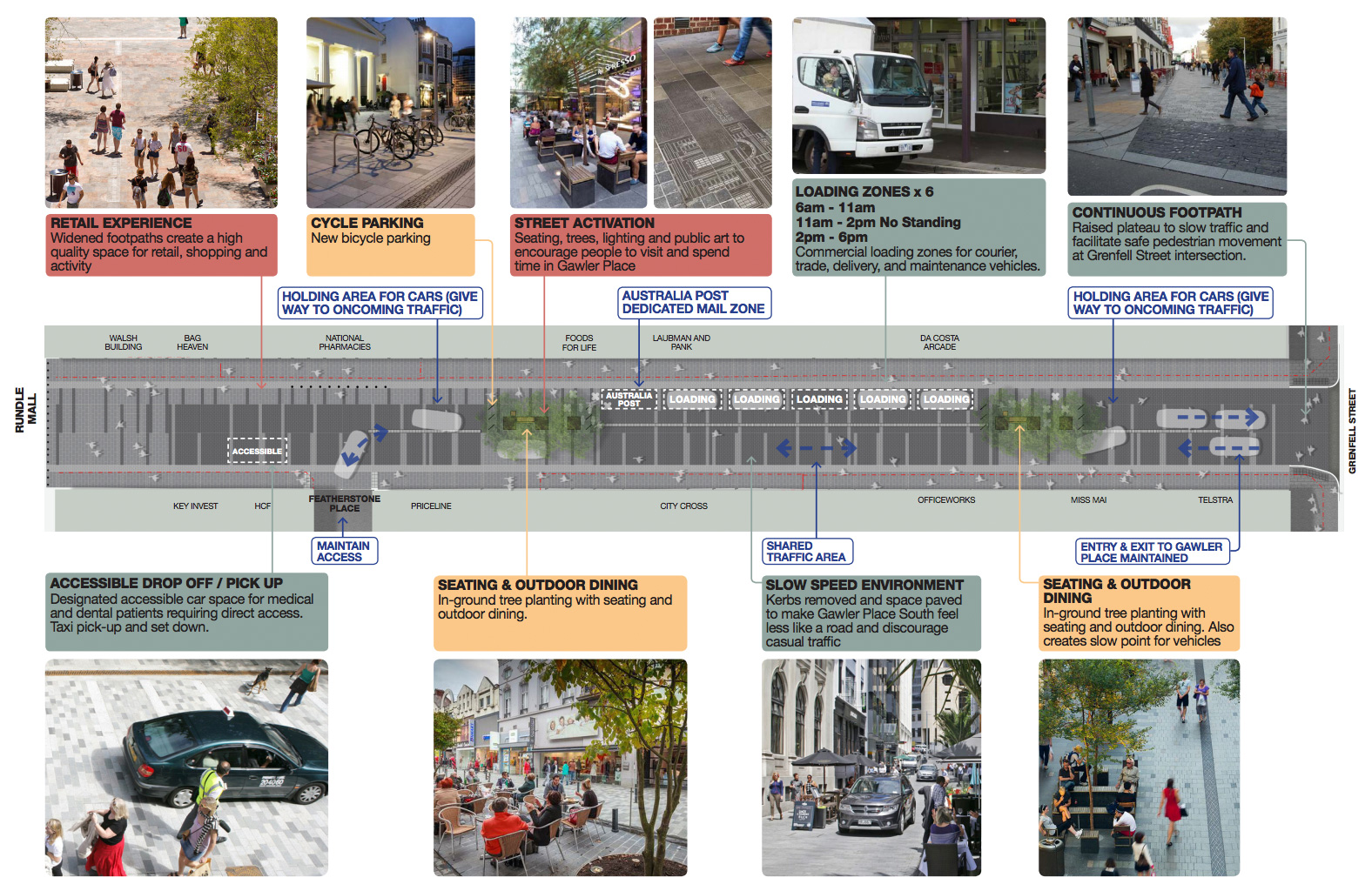 The original upgrades planned for the northern end of Gawler Place.

But he said he was confident council staff would be able to bring two new alternative project designs – one within the original budget and another within what would be considered a reasonable higher cost – to elected members before caretaker period.

The council is legally prohibited from making any major policy or financial decisions within the local government caretaker period.

She argued that the council should proceed with the original design despite the cost, rather than compromise on quality.

“We should stick with the design,” she said

“It’s the highest visited street in the city.We should allocate an increased budget for it.”

Malani acknowledged that unexpected problems underground had increased the cost of the project, but questioned how original council staff estimates could have been so wrong.

“There’s a key question around how the administration (costed) the $7.85 million in the first place.

“I hope that the next council … will be bold and visionary and not compromise on design and quality.”

Malani is not contesting the election.

Central ward councillor Houssam Abiad, who is contesting the election, said he would wait to see the new designs before forming a view on what the council should do, but that the council had to be prudent with ratepayers’ money.

“We’re talking about a laneway here.”

He stressed that he “100 per cent” supported upgrading Gawler Place.

Area councillor Anne Moran said a $1 million or $2 million blowout in the cost of the project would have been acceptable, but that the new cost of the redevelopment was beyond the pale.

Council CEO Mark Goldstone told InDaily that “the construction is on hold while alternate proposals are worked through to ensure that an appealing street is delivered while also providing value for money to ratepayers”.

“Council has asked that administration returns with these alternate proposals in the next few months.”

Explaining the cost blowout in a statement, a council spokesperson said that “following the early investigation works on the street, the complexities around underground services as well as managing accessibility and the construction approach have been found to be more challenging than anticipated”.

“This is not uncommon with projects of this nature and scale in the city.

“The project has also come in substantially over budget and as our job is to be responsible with rate payers’ money, we are in the process of redesigning options for the upgrade that will more closely align with the original budget.”