Legislative Councillors Russell Wortley and Justin Hanson last week spoke in parliament against rate-capping, which is set to become a divisive issue with several councillors publicly attacking the Local Government Association in recent days over its $175,000 pre-election campaign against the Liberal pledge.

Rate-capping is one of several policy areas on which fledgling ALP leader Peter Malinauskas has publicly vowed to keep an open mind amid a broad Labor policy review.

But it’s understood key unions whose workers would be affected by a local government rate squeeze – the Australian Workers Union and the Australian Services Union – are lobbying hard to keep Labor to its pre-election position of opposing any Liberal legislation. InDaily has been told both Wortley and Hanson – who hails from the AWU – have also been lobbying colleagues to oppose rate-capping.

Hanson told parliament last week the issue seemed to be “fairly vexed” within Liberal ranks as well, with “expressed concern about regional investment and about the status of regional jobs, should rate-capping be introduced – and rightfully so I might say”.

“I encourage this new government to think again,” he said.

“The fact that people do not like paying bills is a bit of an easy political point to make, but alleging that therefore any cap will solve all the problems that may exist in the local government community — like golf memberships, trips overseas or mismanagement of council budgets, for example — is another issue entirely.”

Wortley’s speech echoed the LGA’s own rhetoric that “six out of 10 South Australians voted for a political party opposed to rate-capping”.

“The truth of the matter is that rate-capping does not work,” he said.

“It is a populist motion and I believe it was just a thought bubble that went through the minds of the Opposition before the election as they tried to put some sort of substance to their reduction in the cost of living.”

Wortley said a cap would ultimately force councils to charge for other services.

“When a council has to start charging for services that have previously been free of charge then it becomes a user-pays system,” he told parliament.

“Rate-capping will hurt the members of our community who can least afford it.”

Interestingly, the now-shadow minister for Local Government, Tony Piccolo, had previously spoken out on rate-capping during a 2016 debate when he was a government backbencher.

At the time, he said all four councils represented within his northern electorate of Light were opposed to the measure.

“What capping does is it forces councils to increase charges in other areas, so the total cost is the same… this is really just a con job,” Piccolo said.

“It is a Clayton’s cap—the cap you have when you don’t have a cap. Quite simply, it does not work… if this policy is put in place, you can rest assured that the councils will increase their charges and also introduce new charges.”

Piccolo, who will have to sell whatever policy Labor’s lands on, told InDaily: “At this stage, in the absence of any legislation and detail about what they’re proposing, our current position is we need to be convinced it’s necessary.”

“Once they’ve shown us the legislation, we’ll then form our opinion,” he said.

“That’s currently the position of the party.”

Piccolo said Labor “doesn’t control the numbers” and “we need to work out what’s possible to achieve”.

“Peter made it very clear we’re not going to be opposing things just because we’ve opposed it in the past,” he said.

But with SA Best and the Greens likely to stick to their pre-election opposition to the Liberal policy, Labor’s position is set to make or break the reform.

Insiders say there is momentum for a compromise position, which could see a cap imposed, but above CPI – leaving wriggle room for councils to increase rates.

Wortley told InDaily: “I think it’s important we make our views clear… especially when our policy is to oppose rate-capping.”

Asked what he would do if the party shifted its position, he said: “If that changed, we’d be obliged then to think differently [but] I think it’s important to have an opinion about it.”

InDaily understands the Government will have legislation drafted within weeks, with members of Adelaide City Council already flagging a separation from the LGA if it continues to campaign against it.

Councillors Anne Moran and Houssam Abiad yesterday called for the association’s leadership to stand down.

Abiad yesterday posted an article on the issue published on local website AdelaideNow to his Facebook page, writing: “The fact that 50 councils in South Australia voted to have the LGA politically campaign against Rate Capping goes to show the dire need for Local Government Reform in South Australia.”

“The City of Adelaide has self-capped rates for 3 years now, and we are pushing for a 4th year in our budget… Everyone is doing it tough, and it’s time for local government to play it’s [sic] crucial part in curbing spending and focus on better efficiencies,” he wrote. 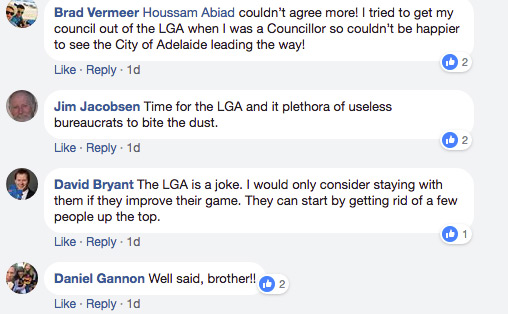 It’s understood the parliamentary contributions by Wortley and Hanson will be reproduced in a newsletter and distributed to LGA members.

Executive director Lisa Teburea said the LGA was “pleased Justin Hanson and Russell Wortley have reaffirmed their opposition to rate-capping, recognising the detrimental impact it has had on communities around Australia”.

“We’re urging all parties and members who opposed rate-capping during the election campaign to keep their commitments to councils and voters and work with us on effective local government reforms.”