South-East locals have long griped about scheduling disruptions and high prices for flights to and from Adelaide, with recent submissions to a Senate inquiry into the operation, regulation and funding of air services to rural, regional and remote communities highlighting concerns over delays to medical treatment, including late diagnoses of possibly life-threatening medical conditions.

But Rex responded in extraordinary fashion last night, issuing a lengthy statement to local media outlets highlighting ongoing issues with a “crippling pilot shortage” and defending the monopoly model for regional routes, before declaring: “Given the amount of unfair criticisms levelled at Rex by local officials, Rex has decided to scale back its services between Mt Gambier and Adelaide to better utilise the very scarce resources.”

It said details of the changes “will be announced shortly”.

State Regional Development Minister Tim Whetstone said this morning the statement appeared “odd” and that he was “trying to put a call in to their government relations people to find out exactly what they’re basing this on”.

“I want to know what the justification is to reduce any regional airline service,” he told InDaily.

“If it’s for the sake of spitting the dummy, that’s hardly acceptable.

“I don’t know whether it comes off the back of the Senate inquiry… is it a commercial decision or is it an agenda item that will streamline regional operations? I guess that’s the first thing I’d want to be asking.”

Independent Mount Gambier MP Troy Bell said it was “disappointing Rex have made this decision in the manner that they have”.

Bell’s ongoing differences with Rex saw the airline effectively ban him from all its flights last year with a corporate communications executive writing to him in December in response to a meeting request.

“As you had already taken the prior decision to boycott our services without first finding all the facts from us, we do not believe that a meeting now would be useful under these circumstances,” the email said.

“We have under separate mail written to you to inform you that your desire to boycott the airline has now been registered in our system.”

However, Bell was diplomatic today, as locals fear further cutbacks of air services in and out of the state’s second biggest city.

“I want to work with Rex and their team to look at the issues that are being raised and what avenues we have to address those,” Bell said.

He argued there were ongoing issues over the services’ reliability and price “and I think there are ways we can address that and work with the community”.

“It would be a tragedy for our community if we lost our airline service,” he said.

Federal MP for Barker Tony Pasin said he had “reached out to Regional Express” whose board includes former Nationals MP John Sharp.

“I’m going to go to Sydney and meet with their board in June to talk to them about the predicament our community is in and the need to have improvement in the relationship between the community and the company,” Pasin said.

A submission to the Senate inquiry from the Mount Gambier and District Health Advisory Council and subsequent reporting in local media appear to have instigated the company’s response.

The submission noted ongoing concerns around “the unreliability of flight schedules and the high cost of fares and how these factors contributed to the attraction and retention of staff at Mount Gambier & Districts Health Service”.

“There have been medical doctor staffing problems at MGDHS associated with disruption to flight schedules on a number of occasions with changing of flight times and cancellation of flights to Mount Gambier,” the submission said.

“There has been ongoing discussion for a number of years between local media, politicians, local councils and community members relating to the problems that people have experienced when they have had rescheduling or cancellation of flights from Mt Gambier to Adelaide and Melbourne and the return flights to Mt Gambier.

“It is well known that the price of fares has risen considerably since Rex has been the sole airline servicing the Mt Gambier population.”

The council’s presiding member, Maureen Klintberg, said today the inquiry “gave us the opportunity to note concerns and issues that relate to the provision of health care and outcomes in the region”.

“It’s a disappointing response from the airline,” she said.

Rex’s statement said that “as an airline solely dedicated to the provision of regional air services to 60 ports across all states of Australia, Rex understands that it is never pleasant to have travel plans disrupted”.

“However [the] local Mt Gambier community needs to understand that Mt Gambier cannot be sheltered from a phenomenon that affects all regional ports in Australia… we believe that we have been very unfairly criticised for an outcome that has been caused by the lack of foresight and commitment by both Qantas and Virgin Australia to responsibly manage the pilot demand. 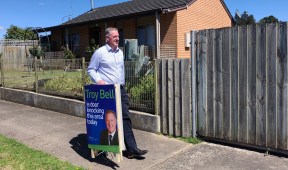 STREETVIEW: Sermons on the Mount

“They simply resort to pillaging the stock of regional pilots whenever they face a crunch and Rex gets the brunt of it as our pilots are one of the best trained.”

The airline said it was “undeniably the best regional carrier in Australia with its network average fare rising by only 1.1 per cent per year over the past 15 years and with its reliability being consistently one of the best – even during challenging periods like what we are experiencing right now”.

“In spite of this, local officials continue to target Rex whenever they feel the need for political grandstanding,” it said.

InDaily has sought further comment from the airline about the exact nature of its threatened service cuts.