Ofo’s General Manager for Australia, New Zealand and India is well aware of the reputation that preceded the incursion of bikeshare companies into Adelaide last year: gargantuan piles of abandoned or vandalised bikes in China and more dumped, distinctively-branded bicycles, scooped up from the Yarra River in Melbourne.

“Over the last two years many painful lessons have been learned,” Dexter Sim tells InDaily.

“There’s no denying those photos. They are real.” 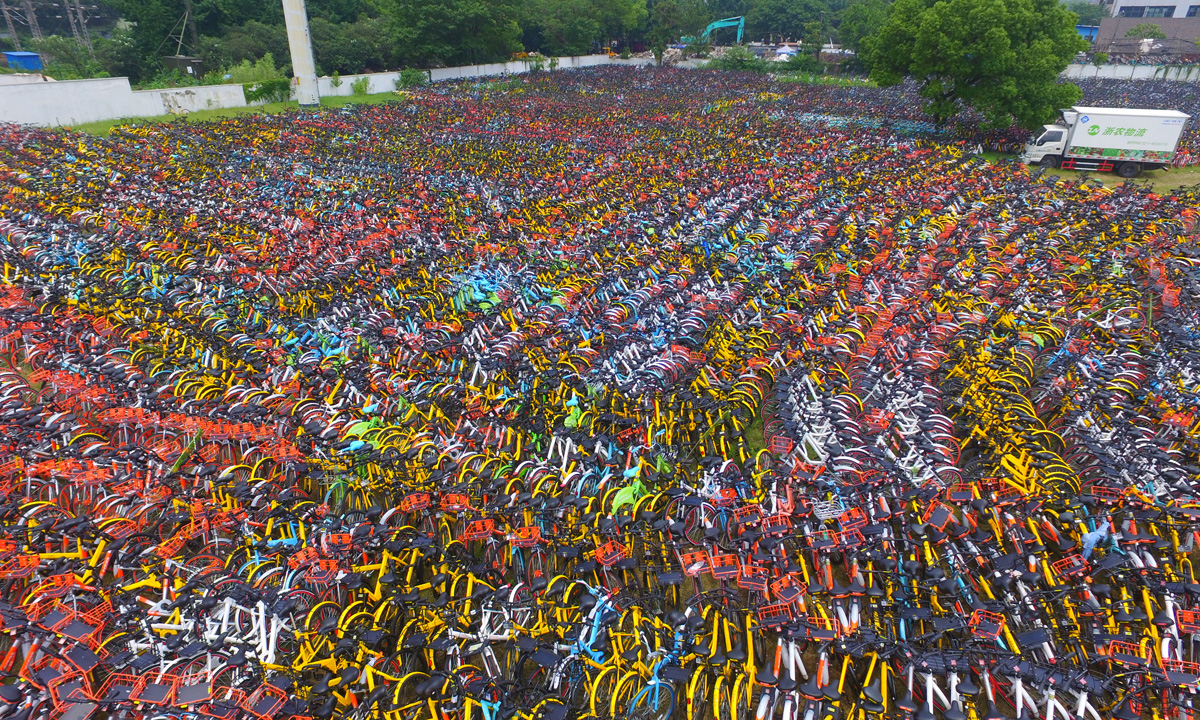 Sim rues the “oversupply” problem that has tainted the fast-growing bikeshare industry since its inception at Peking University four years ago.

Once it became clear that ofo had tapped into what would become a multi-billion dollar global business, everyone wanted a slice.

“At a point in time it was just crazy,” says Sim.

“All these Chinese business-people started their own (bikeshare businesses).”

Now in more than 200 countries, ofo now manages millions of its yellow, GPS-tracked bikes, which users find with a mobile app and leave at their destination for the next commuter to use.

Sim is in Adelaide this week, looking to get a feel for how the place operates and who makes the decisions here, as the company quietly expands its South Australian reach.

Ofo is courting local councils across the state, ministers and the media as the company seeks social licence for its ultimate ambition here – to become a regular and reliable part of everyday transport for the city’s residents.

But reliability necessarily means visibility – lots of bikes on footpaths everywhere that people need to get somewhere – and flirting with the possibility of major political backlash if the same ugly images emerge here.

“We’re trying to satisfy demand and no more.”

“The Melbourne experience is that (they) have been left strewn around the city, in the Yarra and the like,” Lord Mayor Martin Haese told ABC Radio Adelaide at the time.

“Adelaide … is a very neat city – I think we pride ourselves on the presentation of our city,” he said.

“We want to see that this is not going to end up a bit of a disaster.

“Conceptually it is a very good idea … I am a little nervous about this.”

But in the months that have followed, with numbers of bikes still relatively small, vandalised or deliberately misplaced bikes have drawn only minor complaint.

Ofo wants to keep it that way, as its Adelaide operation grows.

Asked to describe the company’s overall ambition for the city, Sim says it’s “to be part of everyone’s life” while Hender says the aim is to become “just a boring and everyday part of public transport”, which is sort of the same thing.

But ofo wants not only to be normal part of Adelaide’s transport mix but a physical part of its public transport network too.

Ofo had a minor coup in December last year when the Museum of South Australia agreed to delineate a small space for bikeshare bikes – and it wants more of them.

Hender – who also leads the 11-person operational team that repairs ofo bicycles, brings wayward bikes back to ofo’s agreed territory and occasionally retrieves them from trees – intends to lobby the State Government to set aside small, painted spaces on the footpath at train, tram and bus stops across the state, for bikeshare bikes (not exclusively for ofo bikes, he stresses).

He’s pitching for specific bikeshare spaces to be added to all new stops, but he doesn’t see any reason they can’t be installed at existing stations with a lick of paint either.

And he’s been going around, local council by local council, seeking permits to run ofo’s dockless bikeshare scheme in their jurisdictions.

It’s about building relationships, he says.

Eventually, Sim says he wants to see Adelaide become a “mature bikeshare city” like Singapore, where he says there are enough bikes in the system that they naturally circulate to where they are needed.

Ultimately: “We need the bikes to be at the same spot every day.”

“(But) oversupply … no company will ever do that again.”