And he’s now bringing the various threads together to weave a documentary narrative covering South Australia’s recent state election campaign – as seen through the eyes of visiting Fringe artists.

“I’ve always been a bit interested in the arts, in music and film,” the Harvard-educated former Westpac high-flyer tells InDaily.

“Even in my days as a senior executive of Westpac, I was a little bit different to everybody else, who were a lot more conservative in their tastes.

“My former boss used to find it a little bit strange.”

He concedes he has long been something of a fish out of water, striding the boardrooms in a suit before cranking his punk albums at home: “I’ve lived that life for a long time, of being a banker during the day and being an arty film-loving punk-loving guy in the evening.”

“It was a bit of happenstance really,” he says of his transition from banking doyen to indie filmmaker.

“The economics led me towards working for a bank…I liked film, but I never had any idea of making films, so it stayed in the background.

“My interest was just that I liked watching films, particularly arthouse-type films.”

He worked through the ranks at the State Bank and then Bank SA, before leaving for Sydney where he held several senior roles at Westpac, including Group Executive of Business Financial Services and CEO of Australian Financial Services.

He’s now retired but still chairs the board of Bank SA.

The turning point came when his wife Alison reconnected with an old school friend on their return to Adelaide, whose husband, Cole Larsen, is a director and film lecturer at Flinders University “and a bit of a punk music fan”.

“This is a guy who’s 6 foot 3 in the old money, with a shaved head, tattoos everywhere,” Hanlon laughs.

“I don’t look like that – I’m the mild-mannered banker – but we really got on.”

Larsen tells InDaily the pair’s wives had originally bonded as school kids when “they sat in a lounge room and watched the moon landing together”.

Their husbands bonded over something similarly epoch-defining: punk music.

“We both grew up with punk, which is pretty funny,” Larsen says.

“I could get away with that kind of behaviour because I was just a lousy filmmaker!”

He says Hanlon arrived in Australia as a “sort of ten-pound pom”.

“He came over with a real love of English punk bands, while I was probably more into American punk.”

Nonetheless, they found common ground with a shared love for the Stranglers, among others.

“It was a chance meeting [but] I give him the credit for changing me,” Hanlon reflects.

Larsen suggested they work on a film project together.

The project was one that crystallised their love of film and punk music – a film clip for local band The Young Offenders.

“I’m not a photographer, so I thought, you know, maybe I could do a bit of organising, and maybe put a bit of money in,” Hanlon recalls.

“But I wrote the script and did half the filming and editing, and thought ‘this is a bit of fun’.”

Larsen then pushed Hanlon to write a film script.

“I wrote a story that was three or four pages, and he said ‘you should turn it into a script’. I said ‘isn’t this a script?’ – which shows you how much I didn’t know.”

Larsen gave his friend a few books on the art of scriptwriting, and Hanlon came back with a treatment for a short film that the pair plans to make this Spring. 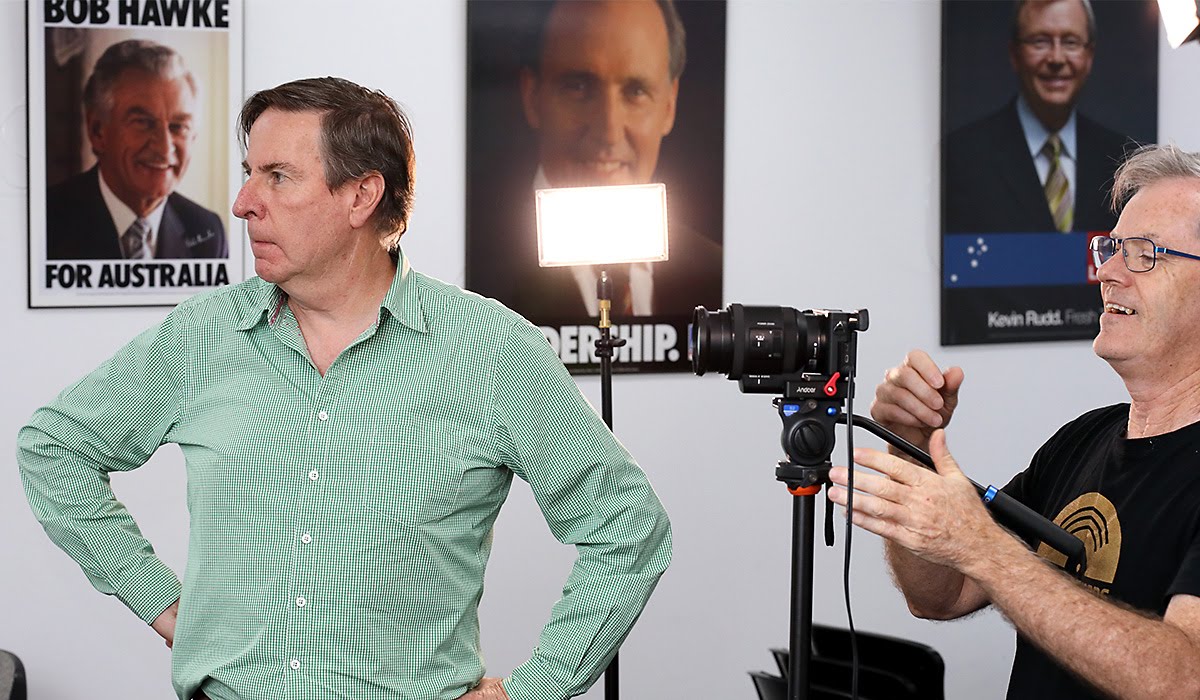 But the real turning point came after Hanlon and his family holidayed in Iceland.

He said to Larsen, “I’d love to go back there to a music festival and make a couple of what I’d call amateurish indie music videos for Icelandic punk bands”.

“But it turned into ‘let’s make a documentary’,” he says.

Atlantis, Iceland was inspired by the work of French film-maker Chris Marker, whose 1962 La Jetée was an influence on the Hollywood cult classic 12 Monkeys.

Hanlon wanted to follow in the footsteps of Marker’s Sans Soleil, so he returned to Iceland with Larsen and their collaborator Rick Davies, a former engineer at Mitsubishi who had seen the writing on the wall for the auto industry and went back to university to study law instead.

The film brought together a narrative around the Iceland Airwaves music festival set against the backdrop of the country’s 2016 general election.

“We got into three film festivals in Adelaide, Sydney and Reykjavik – which was a big surprise to me,” Hanlon says.

Larsen says the film “covered all the things we were interested in – music, politics, landscape, culture and people – and a narrative thread”.

“Peter always loved that [Marker] film, so we used the thread of that film… strange westerners looking for the meaning of happiness – we had that as a narrative thread, and searching for these three children who were in the Marker film.

“We spent 21 days in Iceland, filmed the film, brought it back and we haven’t looked back since!”

Hanlon’s current project is closer to home but follows a similar narrative arc – bringing together the dual threads of SA’s chaotic March state election campaign with the crazy cultural hub of the Fringe Festival.

“He titled the email Mad March.”

The filmmakers tracked performers such as Anya Anastasia, along with MPs and prospective MPs in what they expected would be a frenzied three-cornered election race. 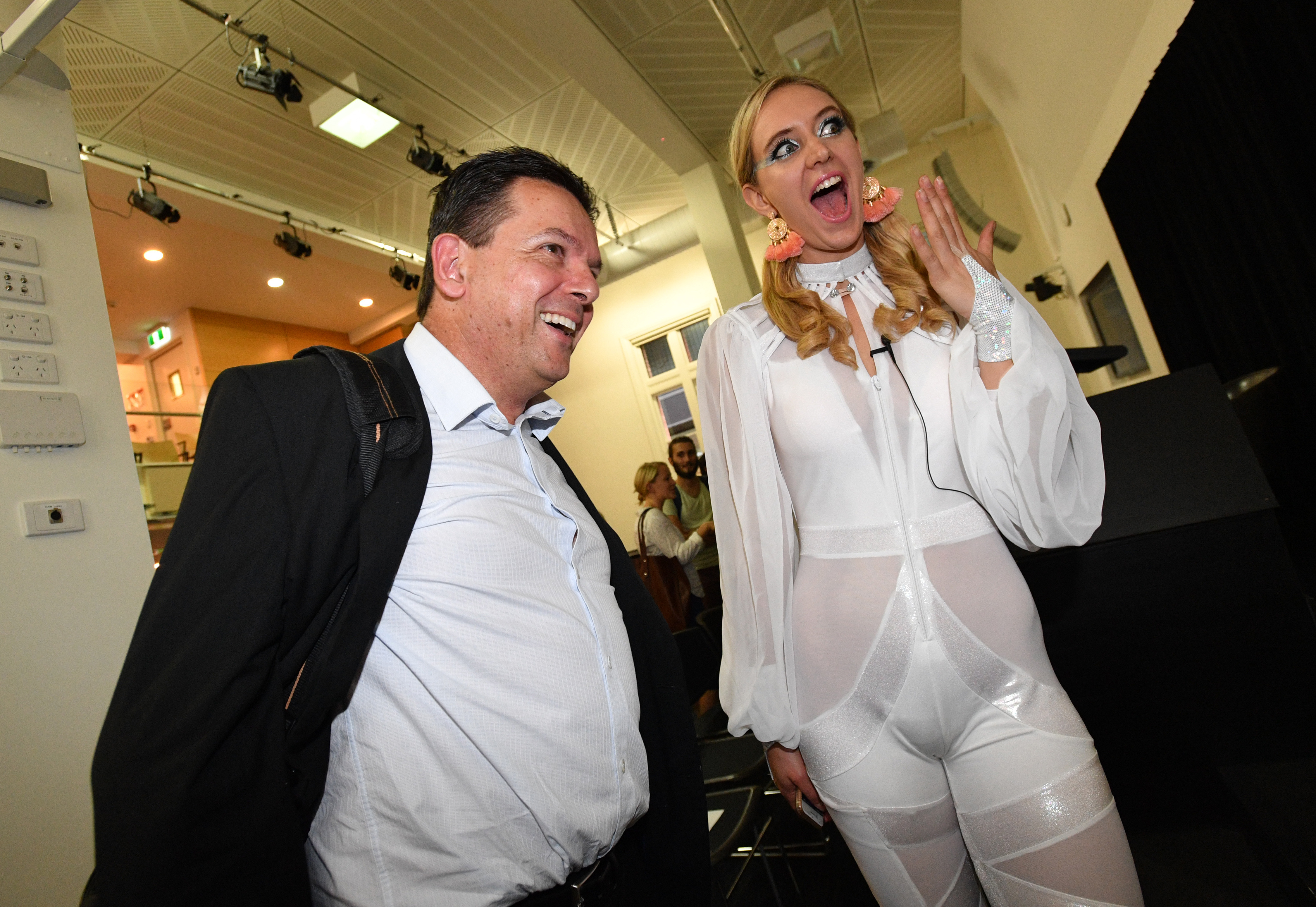 It was an ironic gambit, given the bank whose board Hanlon chairs played a key role in the political debate in the lead-up to the campaign.

“It certainly got the bank a lot more involved in politics than banks normally like to be,” Hanlon reflects of the bank tax spat, which he says mostly played out while he was still overseas.

But he insists that “up until the bank tax, the bank had a very good relationship with the former government”. Indeed, he says, “we ended up having lunch with the Premier and Treasurer and a few of our board members and [CEO] Nick Reade during the election campaign”.

“In many ways, [the mood was] ‘well, that was an interesting fight we had – but it’s over now so let’s get back to doing what we normally do’.”

“The most important thing for Bank SA and the board is to have a healthy economy and community in SA, because that’s how the bank is successful.”

Hanlon and his collaborators now have 45 hours of film for Mad March, from which Davies has hewn a rough cut. 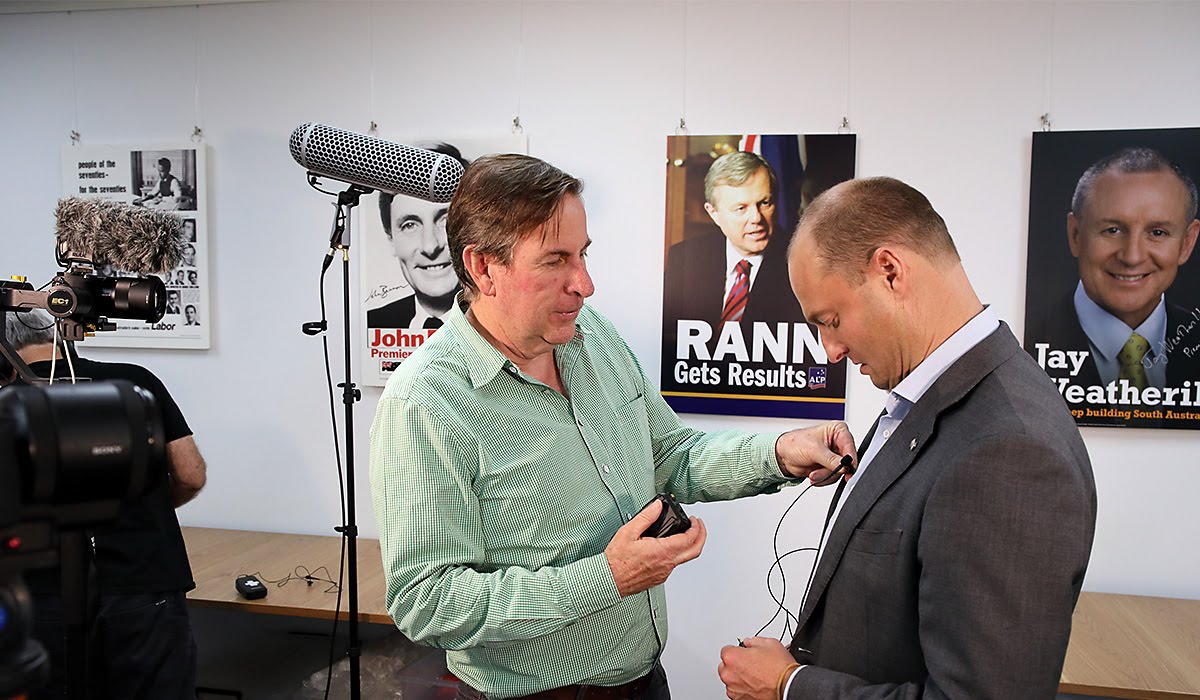 “Once we get to the point we think it’s reasonable we’ll be having chat to editors and producers around town to see what they think about it, and then pitching it to TV stations and people like that to see if they’ll fund the making of it,” Hanlon says.

He’s coy about which characters will emerge as the central protagonists, but says: “We always wanted to make it about someone struggling, and if they won or lost it would still be showing their struggle to make their way in politics – and ditto with the Fringe performers.”

“Very few of them actually make a lot of money out of it – they both do it for their art,” he says, noting a narrative connection between his subjects.

“It’s very much about the struggle – both of them go into it and they’re both performers – they both have to perform. And they do it because they’re absolutely committed to their cause, be it art or politics.

“The candidates we spoke to had left their jobs and didn’t necessarily have a job to go to… [you’ve got] Xenophon people having to stump up $20,000 with a view that they might win, they didn’t win and have got no income coming in and they’re $20,000 in debt all of a sudden…

“So it’s the other side of the ‘greedy politician doing it for fame and fortune’-type of argument. They struggle – like the festival performers, who very, very rarely make enough money to live on.

“Instead they’re working in bars, restaurants, call-centres to earn a bit of money to do what they do.”

So is this now what Hanlon does?

Does the retired banker now call himself a ‘film-maker’?

“I guess by definition, yeah” he shrugs.

“I’m probably more at the hobby end [but] if we ended up making some money, I’d probably classify myself as a film maker.”

“He’s learned like a sponge – it’s been amazing in terms of picking up the narrative and structural elements of storytelling… his writing is becoming better and better.”