Corbell-Moore told a council committee workshop last night that giving people a taste of city living in a “try before you buy” scheme could overcome potential buyers’ pre-conceptions, such as the view that you need a car to get around the CBD.

“I have an idea – maybe is there a possibility that we can look at giving people an opportunity to live in the city that meet a certain criteria for a certain period of time,” the south ward councillor told the meeting.

“Like, for two weeks, or for a month … try before you buy.

“They’d have to meet certain criteria – they’d have to be screened (to ensure they are) really serious about living in the city.”

Corbell-Moore told InDaily this morning the scheme could offer free accommodation, or require a bond, or involve a small charge.

She said the council could work with owners of apartment buildings that aren’t fully occupied to implement the proposal, but that it was up to staff to assess how it might work.

“The idea needs to be explored,” she said

As InDaily reported yesterday, the council’s administration has warned the CBD and North Adelaide are likely to fall 2500 people short of a collective residential population target of 28,000 residents by 2020. However, modelling by population consultancy .idcommunity forecasts stronger population growth – expecting 27,293 residents by 2020.

Corbell-Moore told her colleagues last night that her scheme would allow homebuyers to “get a feel for city life”.

“Maybe it’s a good idea to help people overcome these barriers … for example (the view that) ‘you can’t get around the city without a car … how am I going to get around?’

“Let them experience it because they wouldn’t otherwise, unless they’re going to go Airbnb or stay in a hotel.”

Area councillor Sandy Wilkinson told the meeting a free city apartment stint could be used as an incentive to encourage city workers to fill out a survey indicating what it would take for them to live in the city.

“It’s what car dealers do – they let someone have a BMW for a week to see if they like it,” he said.

“If the council was to embark on a comprehensive survey of all city workers, every workplace in the city gets surveyed, and we have some incentive thing, and maybe the prize is you get to stay in some nice apartment in the city for free.

“And we ask people … what it would take (to convince you) to live in the city?”

Central ward councillor Houssam Abiad said that after eight years on the council he had yet to find out what CBD workers “want” from the city in terms of living there, and he wanted to find out.

“I think Priscilla’s idea of giving them a taste is lovely (but) I think that it could actually backfire,” she said.

She said the city had to be made into an attractive “product”.

“We haven’t got our product to the Rolls Royce level yet – our rubbish collection is hamfisted, most streets in the city are lined with rubbish bins. Hutt Street is a situation that we don’t seem to be able to get a handle on.

“(But) I think we should definitely advertise the good things in our city.”

Lord Mayor Martin Haese suggested reviving the council’s “Already Home” program, which asked city residents to make short films and art about what it’s like to live in the CBD.

“The Already Home program was excellent; I think it was one of the great initiatives that council – it’s a shame – didn’t continue,” Haese told the meeting.

“I know it’s been suggested in the past … that it wasn’t highly successful, but of course not too soon after that program was discontinued, we did then begin to see some incremental growth in our residential population in the city.

“I think resourcing that would be very, very important.”

You can watch one of the entries to that program, Sounds of Life by Urtext Films, below.

Haese added that the city enjoyed “competitive advantages” over other areas of Adelaide, including its access to small venue licences and that it should be congratulated for being South Australia’s third-fastest growing local government area.

Corbell-Moore told the meeting that some of her friends had bought property near the city, but not within it, because the offering was not what they were looking for.

She brought up a real estate website on her device to describe the problem: “Looking here at just one apartment (it has) one bedroom, one bathroom, no car park – $442,000,” she said. 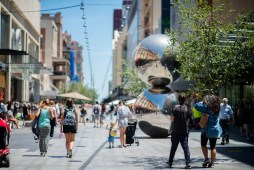 “I’m assuming that’s pretty standard, so that price point certainly doesn’t match what people my age are looking at getting for their first home.

“I’ve had some friends recently make purchases on new developments outside of the city (and) the trade-off for them is they can have so much more outside on the fringes.

“I know we’ve got lots of apartment complexes in the pipeline, but does the product match the potential target market?”

North ward councillor Phil Martin warned that developers were not building the sort of apartments that buyers want, but that he liked Corbell-Moore’s temporary city living idea.

“The market is constructing one bedroom, one bathroom apartments,” he said.

“The greatest demand is for two-bedroom, two bathroom (houses) which are not being constructed.”

He joked that a large proportion of the city’s working population could be accommodated in Moran’s North Adelaide house.