While Mix has been a long-term ratings leader, it has now taken over the number one position in the key breakfast and drive shifts while opening up a huge overall lead in the first survey of the year.

FIVEaa has moved up the ladder – from third to second place – despite losing some listener share, due to a big fall from previous second-placed station Nova.

After a very soft end to 2017, ABC Radio Adelaide has improved its position, regaining its dominance in the over 65 age group despite introducing new programming designed to attract younger listeners.

In Breakfast, Mix has ended the long-time two-horse race of the ABC and FIVEaa, with Mark Soderstrom and Jodie Oddy now the clear leaders.

They have deposed FIVEaa’s David Penberthy and Will Goodings, who lost share and are now in second place. The ABC’s Ali Clarke had a better survey and is now breathing down FIVEaa’s neck. 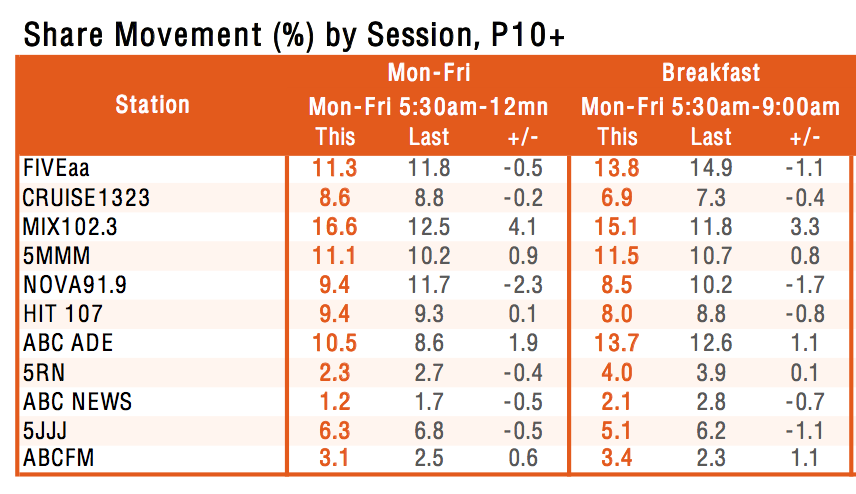 The ABC has improved overall to move up into fourth place, thanks to a bounceback in all shifts, notably Peter Goers who rules again in Evenings after putting on 4.3 percentage points. His rivals at FIVEaa lost an almost suspiciously large amount of share – down 6.8 percentage points.

It was a good survey for rock station Triple M, which rocketed up the list to third position thanks to a solid increase in Breakfast and big increases in the Drive and Evenings shifts.

However, Mix is completely dominant across the daytime hours – garnering nearly one in five listeners in mornings and afternoons and taking over top spot in Drive from Nova. 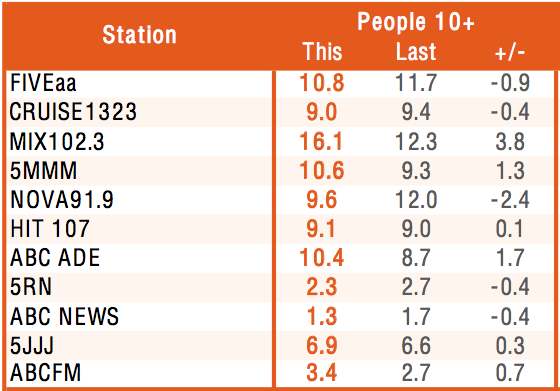