Peter Gandolfi, the mayor of the south-east Wattle Range council, is a former adviser to Liberal premiers John Olsen and Rob Kerin, and has been a party candidate for Mount Gambier. He also unsuccessfully nominated for Liberal preselection in MacKillop for the March state election, losing out to Nick McBride.

In November, Gandolfi confirmed to InDaily that moderate faction powerbroker Pyne urged him to stand as an independent against the Liberal Party’s endorsed Barker candidate, Tony Pasin, at the 2013 federal poll. Pyne has vehemently denied the suggestion was made.

An internal investigation subsequently concluded that the matter should be dropped.

InDaily understands Gandolfi was also sounded out by Xenophon to run for SA Best in MacKillop – but turned him down.

It does, however, indicate the centre party – which outpolled Labor and the Liberals in last month’s Newspoll – has set its sights on the regional Liberal stronghold.

Asked by InDaily about the approach, Gandolfi said: “I can say that a number of political parties have approached me, but I have no intention at all of running at the state election for MacKillop.”

Asked whether he had spoken to Xenophon directly, he replied: “I don’t think I’ll get into any details there.”

“I still do my job as a mayor, and I’ll upset all sides of politics occasionally, but I’ve got to put my local community first… partisan politics is way down below that.

“I’ve taken the view that I put my hand up for the Liberal Party and was unsuccessful in the preselection… I took that on the chin and got on with doing my job as mayor.”

In a document sent to local Liberal branch members – seen by InDaily – he said the seat should “not be taken for granted”, warning that both MacKillop and neighbouring Mount Gambier were lost to independents in 1997. Williams, at the time an Independent Liberal, won the former with just 28.9 per cent of the primary vote, while Rory McEwen took the latter on preferences with a mere 22.5 per cent.

“Given the low primary vote needed by Independents and minor parties, the rise of the Xenophon party is also a real threat in MacKillop,” Gandolfi warned the Liberals.

“The Xenophon party won five booths in the Wattle Range part of MacKillop at the 2016 federal election, with a candidate (James Stacey) who did not live in Barker.

“It will be no surprise in the Xenophon Party runs a candidate in MacKillop.”

Xenophon said of his approach to Gandolfi: “That was some time ago – I’m not going to comment on any specific approaches.”

“But Peter Gandolfi is highly regarded in the area, he’s a good guy… but my understanding is he won’t be running,” he added. 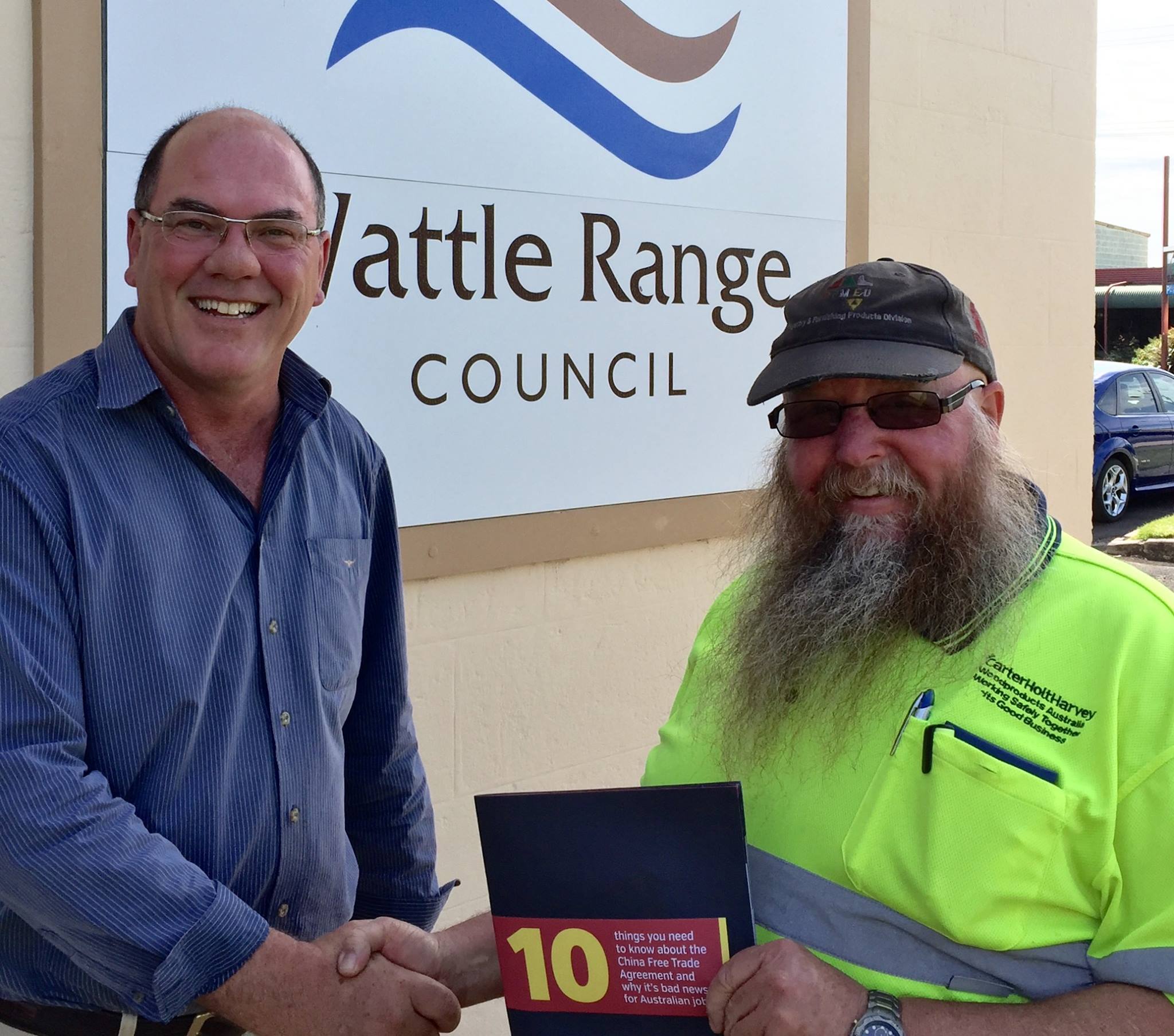 Mayor Peter Gandolfi at a meeting with a CFMEU delegation. Photo: Facebook

It’s understood SA Best is unlikely to field a candidate in Mount Gambier at this stage, with former Liberal Troy Bell looming as an imposing independent prospect. But Xenophon said of the likelihood of a candidate in neighbouring MacKillop: “We’re very interested in MacKillop – we’re working on it.”

However, Williams himself is adamant the seat won’t fall to a third-party candidate – despite himself securing it as in independent in 1997 before rejoining the Liberal fold.

“Seats like Mackillop become independent if the incumbent does something very stupid or the party’s on the nose…I don’t think either of those things apply at the moment,” he said.

Coonawarra local Jon Ey has already put his name forward to run as an independent in MacKillop.