Days before Haese delivered that speech, the Adelaide City Council was warned – by its own staff – that it should avoid being perceived to be “acting unreasonably”.

But as 2017 comes to a close, that ship might have already sailed…

City council fails to turn up to own meeting

The Adelaide City Council was forced to cancel a regularly scheduled meeting in June – for what is believed to be the first time in at least 20 years – because too few councillors said they would turn up.

At least seven members have to attend for the council to be able to legally meet as an elected body, but only six were available.

Later in the year, councillors complained that a modified meeting structure had left them uninterested one week and too exhausted for sound decision-making the next.

Some city councillors were showing signs of buyer’s regret, early this year, having voted in 2016 to recite an acknowledgement of Colonel William Light’s “vision for Adelaide” at the start of every future meeting.

Central Ward councillor Houssam Abiad proposed that the acknowledgement be “reduced to one sentence”.

During a brief debate on Abiad’s motion, no-one mentioned the fact that it already only ran for one sentence.

The motion was narrowly defeated and the mandatory genuflection survived intact.

That’s despite the existence of an obviously superior version from the talented scribes at Opposing Everything Because I’m From Adelaide: 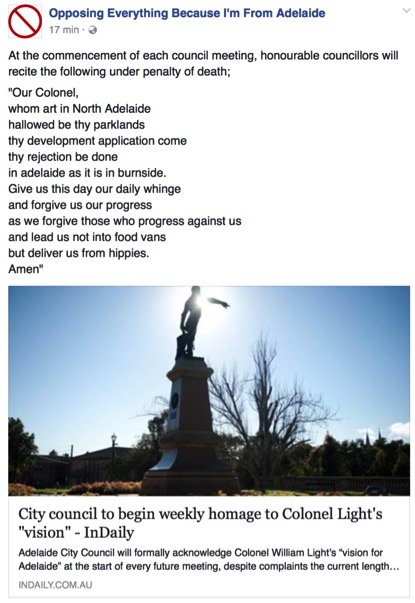 Local Govt should stay out of debate I started, says councillor

He also told local radio that councils should stay out of the issue, and focus on roads and rubbish instead.

Despite submitting a motion to a forthcoming council meeting instructing Haese to write to the Prime Minister opposing #ChangeTheDate, Antic told ABC Radio Adelaide – and argued, in a column two days before the meeting – that the matter should be left to the Federal Government.

The headline on Antic’s column, published two days before he was due to present his motion instructing the Lord Mayor to get involved in the issue.

When the time came to present his motion to the council chamber, he swapped it for a motion urging local governments to stay out of federal political issues.

The motion was never voted on – his colleagues voted to ‘lay it on the table’ and stop speaking about it.

In October, an intrepid band of North Adelaide worriers formed an action group to try to persuade federal authorities to reduce the impact of the flight path over North Adelaide – a suburb with a median house price of $1.1 million.

Airservices Australia representatives had told a council committee meeting the week before that environmental protection laws made it difficult to change flight paths – which was “not very fair” to those who had been living under them for years.

North Ward councillor Phil Martin agreed, telling InDaily: “I have residents who have complained to me that they can’t even have friends around for a barbecue…”

Fellow North Ward councillor Sue Clearihan told us: “If you don’t have pitched roofs … it does have an impact on your daily activities.”

“If you are listening to the radio it interferes with that.”

Local resident Ann Irwin told us at the time that she “detested” the aircraft noise, which sometimes woke her in early in the morning.

“It’s just very irritating that it’s so noisy, especially when I have the house open,” she said.

But aircraft enthusiast Peter Hubbard said he loved living under the flight path.

“It was a fortuitous choice that I chose a house that just happened to be under the flight path,” he said at the time.

“I was in the air force and I’ve got this thing about planes.

“I hear the noise of the plane first – I have an app on my phone and my tablet and my PC that tells me what it is, where it’s going, where it’s from, how high it is; I take photographs; I enjoy it.

The council was not taking ‘no’ for an answer in March, voting to force Haese to write to Tourism Minister Leon Bignell with a request for the Government to look into returning the Formula One Grand Prix to Adelaide.

The minister had repeatedly, publicly, derided the idea in the weeks prior to the meeting and suggested councillors were “clowns” for suggesting it.

Antic told his colleagues at the meeting that he was “quite happy to be told” there was no chance of the event returning to Adelaide.

However: “If we don’t [inquire with Bignell] we’ll never know.”

In July, when the Adelaide Festival pleaded with the council to leave its unsightly pontoon on the River Torrens until 2019, elected members made the “compassionate” choice and agreed to do just that.

Although the Festival missed two council-imposed deadlines to make the unmoving barge more aesthetically pleasing – with some fake grass and timber cladding – it got there in the end.

But as the pontoon’s self-appointed social media managers proved in one of our favourite videos of 2017 – and in what could function as a metaphor for many of Adelaide’s travails this year – even ugly things have beauty of a kind: