The father of four, who does not want to be named, says he moved into the Lightsview hub in 2013 and has since consumed what he calls “dangerous water” after his property’s drinking supply was “cross-connected”.

The connection error, which was only rectified last week, has been confirmed by SA Water, recycled water provider Water Utilities Australia and Lightsview’s developer, Peet Limited, with an urgent review now underway.

The resident says he is seeking legal advice, having notified SA Water more than two years ago about concerns over the water quality.

In a letter sent to various local government representatives and Neighbourhood Watch, seen by InDaily, he writes: “I did not get a proper answer and the issues were not followed up adequately.”

“It was the responsibility of SA Water to intervene at that point but I feel this is a system failure,” he says, describing the controversy as a “huge incident”.

“We had recycled water (dangerous water) in all the drinking taps, showers and potable (main water) which was connected to the toilets and the garden irrigation system,” he wrote.

He told InDaily that both he and his family had suffered from various health issues in recent years, although he did not elaborate and refused to comment further.

In his letter to various authorities, however, he wrote: “Personally we all are shocked, very unhappy and seriously worried about our health and wellbeing in [the] short-term and long-term due to the consumption of recycled water (dangerous water) in our daily routines since we moved in this house.”

“We do have several ongoing health issues and I am pretty sure the recycled water influenced those concerns.”

In a statement to InDaily, SA Water confirmed: “This customer reported a dirty water complaint to SA Water in June 2015.”

“A network technician attended the property and flushed water through the main, in an attempt to dislodge any existing sediment which may have been causing the dirty water,” the utility said.

“We [subsequently] became aware on 6 December 2017 of a cross connection of [the] customer’s recycled water supply with an SA Water mains water supply.” 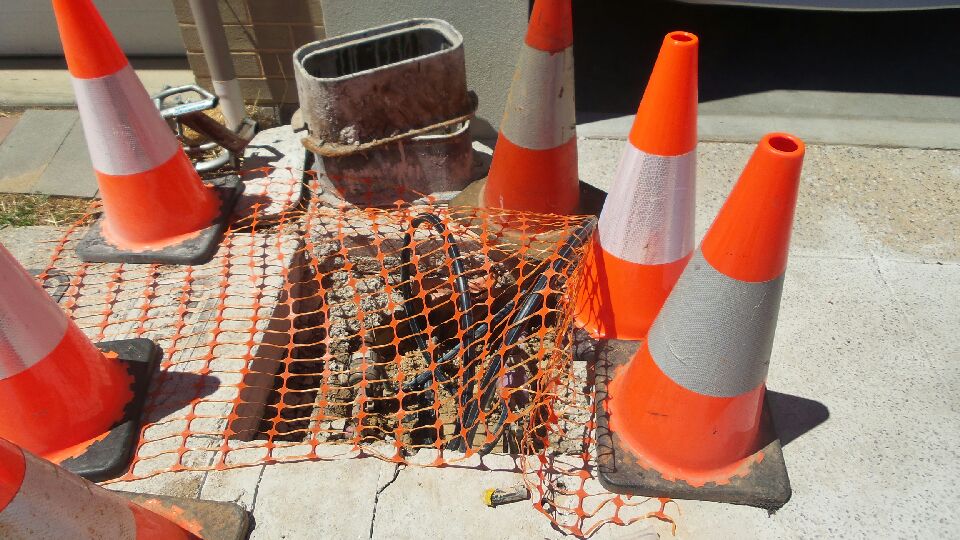 A supplied photo of the suspect pipes after the discovery was made.

The still-under-construction Lightsview housing development – which was formally proclaimed as a standalone suburb last year – is a joint venture between Renewal SA and developer Peet Limited, which subsumed the original development partner CIC [Canberra Investment Corporation] Australia in 2015.

According to SA Water, the recycled water system in the Lightsview area “was installed by the estate’s developer, with water provided by Water Utilities Australia”.

“Any questions relating to the recycled water system in Lightsview should be directed to WUA,” an SA Water spokesperson said.

After being made aware of the cross-connection, SA Water says it “immediately attended the site, isolated the mains water supply and worked with WUA to correct the issue as soon as possible”.

“We [originally] connected a drinking water supply and meter to this property in November 2013 in accordance with all relevant standards and procedures,” the spokesperson said.

“The subsequent installation and inspection of private pipework (including recycled) was done by the other parties who have responsibility for these assets and tasks.”

Peet Limited told InDaily the two utilities, SA Water and Water Utilities Australia, were now “undertaking a review of this situation as a matter of priority”.

Peet Limited CEO and managing director Brendan Gore told InDaily in a statement: “Lightsview was only very recently [on Wednesday last week] made aware that one of our households at Lightsview has had issues with its water and had apparently been receiving recycled water through the taps intended for mains water.”

“We understand that SA Water has responded very quickly and the matter was immediately rectified.” 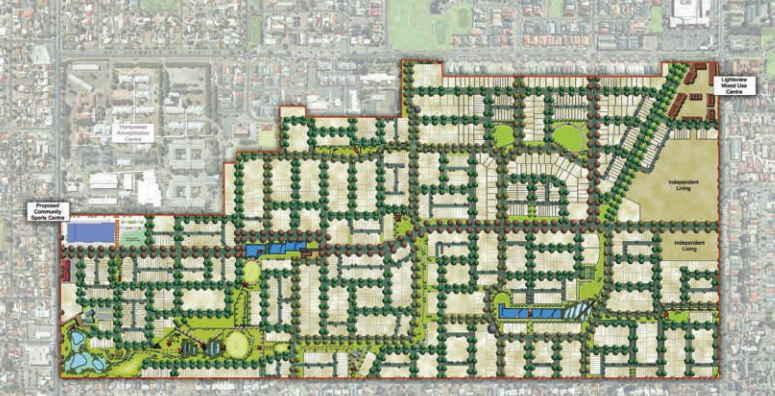 A map of the Lightsview precinct from a Renewal SA brochure.

On its website, Water Utilities Australia explains its “Lightsview ReWater” project, enthusing that “every day, residents of Lightsview actively demonstrate their care for the environment [by] being part of a Sustainable Housing Community… that is committed to making the most of available resources without wastage”.

The site stipulates that “as a condition of Lightsview’s commitment to sustainable development, all dwellings need to be constructed with an additional plumbing system to permit the connection and use of recycled water for toilet flushing as well as for garden irrigation, car washing and other purposes outside”.

“It is sourced from stormwater runoff, captured in wetlands and stored in underground aquifers before being pumped to Lightsview,” it says.

“Wetlands are nature’s way of cleaning polluted water, however further treatment is provided by injection of the water into aquifers which exist underneath the Adelaide Plains.

“Here the water is further filtered while the darkness effectively kills off any bacteria that might be present.

“Cleaned and purified by these natural processes, ReWater is then pumped to a storage tank located under the tennis courts at Lightsview. The contents of this tank are continuously disinfected prior to entering the pipe network.

“This provides additional safety and ensures that Lightsview’s reWater quality meets the recognised South Australian Class A Reclaimed Water Guidelines, enabling its use in homes and gardens and for the irrigation of green space throughout Lightsview.”

It says the rewater runs through specifically-designated “purple pipes and fittings… provided to the boundary of each dwelling and housing block as part of a system which is completely independent of the SA Water’s potable (drinking water) mains supply”.

“As a result of this work they were made aware of a property at Lightsview in which the drinking water service inside the house were being supplied with recycled water,” he said.

“SA Water were immediately notified of the cross-connection and an SA Water service crew arrived a short time later.

“SA Water made temporary repairs to the drinking and recycled water supplies to the affected property which were completed at approximately 7pm on the evening of Wednesday 6 December 2017.

“Testing undertaken by SA Water and Lightsview ReWater have confirmed that the supplies to the affected property are now correct.

“This incident is being investigated by SA Water, Lightsview ReWater [WUA] and the developers of the Lightsview Estate [Peet Limited] to further understand the cause of the cross-connection.”

All three companies insist the incident is an isolated one as far as they’re aware.

“This is an isolated incident and does not indicate there are other properties in the area that have a cross-connection,” Dooley said.

“However, actions are being undertaken in conjunction with SA Water to confirm that this is the case.” 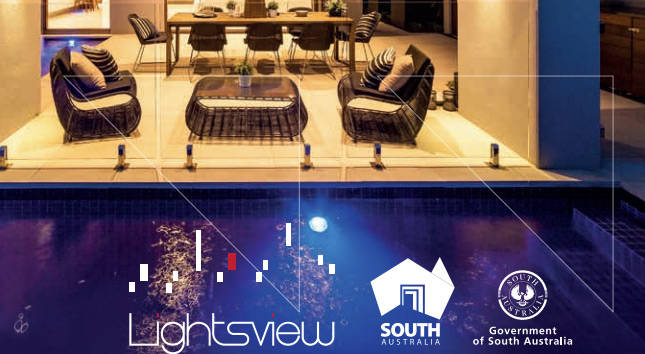 The cover of a brochure spruiking the Lightsview development.

Gore said there were “currently around 2000 households established at Lightsview and this appears to be an isolated instance”.

“Nonetheless, SA Water and Water Utilities Australia are, as a matter of priority, undertaking a review of this situation and Lightsview is assisting in whatever way it can,” he said.

SA Water told InDaily: “We aren’t aware of any other incidents of this nature from customers in the Lightsview area.”

Renewal SA did not comment today, deferring to the statement from Peet Limited, which oversees the operational side of the development.

The “drought-proofing” water re-use measure was first announced in 2009 by then-Environment and Conservation Minister Jay Weatherill, who said at the time “about 2500 households are expected to benefit from the scheme”.

“Under this initiative, every home built at Lightsview will be plumbed with a purple pipe for recycled water,” he said.