Adelaide City Council last night unanimously voted to have the Lord Mayor write to the Government, questioning the design of the CityLINK tram extension.

Speaking to InDaily today, Haese said: “The whole point of the project was to get people down to the East End.”

“The people who would be coming in to the city from (Glenelg) would then need… to board a separate tram to go to the East End,” said Haese.

“I suspect that people will just walk – and that would seem to negate the (purpose) of the tram.

“The very reason we advocated so strongly for this tram extension… was to underwrite maximum patronage to the East End of Adelaide and anything which would seemingly reduce the ability for people to travel to the East End is… a wasted opportunity.”

Under current plans, tram commuters travelling north along King William Street, wanting to continue on to the East End, will have to get off at the Rundle Mall stop and walk to a stop at Gawler Place – or alight at the stop in front of the Adelaide Railway Station and wait for another tram heading east along North Terrace.

Haese said he would not go as far as to say the tram extension was “pointless” without the right hand turn, however: “It seems to negate the whole reason (to build) the tram in the first place.”

He stressed that the council was a “willing partner” with the government on the tram project (it contributed $5 million for streetscape improvements and the East End destination stop on North Terrace) but: “We get one shot at the title; let’s ensure that we get it right.”

“Time is of the essence.”

Construction on the King William Street / North Terrace intersection is reportedly due to begin in early January.

Haese added that the tramline needed maximum “flexibility and frequency”, and he would speak to Transport Minister Stephen Mullighan – who has argued increasing the number of corner turns at the intersection would cause traffic delays – about the lack of a right-hand turn.

A Government image of a new tram stop on North Terrace.

The Lord Mayor said his “information” was that there would, in fact, be a tram track built to allow trams to turn right around the intersection’s south-eastern corner into North Terrace, but that it would only be used for out-of-service trams.

“I understand that there will be tram tracks which enable a right hand turn, but the information I have is that they won’t normally be used for trams with people on them.”

A design drawing presented at last night’s council meeting shows what appears to be a single tram track bordering the south-eastern corner of the intersection. 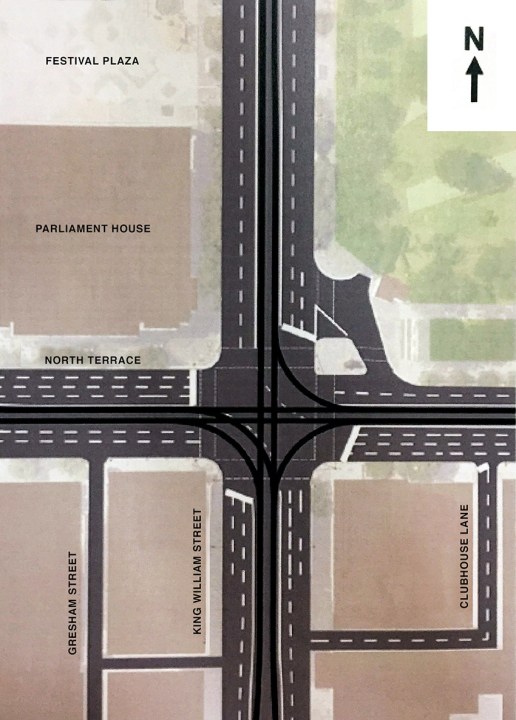 However, Mullighan told InDaily: “As with any modern tram line across the world with multiple destinations, passengers may need to transfer between lines.”

“The city tram extension will deliver substantial benefits to the East End, including being serviced by a free, frequent tram service.

He said the service would provide “a vital transport link for more than 40,000 students and staff who study or work at the University of Adelaide and UniSA’s east and west campuses”.

“The extension will be the first time in almost 60 years that Adelaide’s tram network will have multiple end destinations, rather than simply a single line between Glenelg and the Entertainment Centre.

But Opposition Transport spokesperson David Pisoni said the Government had “compromised the project in order to meet a political timeline” of the March 2018 state election.

Pisoni said the tram extension was a “once in a lifetime opportunity that has been compromised by the government’s self-imposed time restrictions”.

In July, Mullighan announced the Government would spend an extra $10 million on the tram extension to fast-track it.

Haese added that while communication between the Government and the council had been “fluid” on “all other aspects” of the project, communication concerning the North Terrace / King William Street intersection had been “poor”.

The council unanimously passed Central ward councillor Megan Hender’s motion to “confirm” that “proposed and future tram services are able to turn east from King William Street to North Terrace, to best service the East End” and that “current frequency of services is retained across the expanded network”. (Area councillor Natasha Malani was absent.)

Speaking in favour of the motion, area councillor Sandy Wilkinson suggested the lack of a right-hand turn there seemed render the project “pointless”.

“What’s the point of a track down there if you can’t… turn right?” he said.

“It seems a pointless and silly thing… just spend a relatively small amount of money in state government terms, just to make sure that the tram fully services the East End.”

“I just find it extraordinary that this tram could possibly not turn right,” he said. 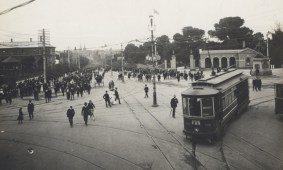 Why SA is missing out on a "seamless" CBD tram network

Hender said people from the East End and members of council staff had raised concerns with her about the design.

“There are some concerns about the extent to which this trams is going to get itself down to the East End,” she told the chamber.

“This is not to do anything other than to ask the Lord Mayor to contact the State Government and just get a better grip on what actually is proposed.”

Earlier this month, InDaily revealed that the Government had considered but rejected a proposal to build tram tracks that would accommodate turns in all four directions at the King William Street / North Terrace intersection because of a $20 million extra price tag.