InDaily reported yesterday that three Alstom Citadis 302s had been bought by the State Government, having been kept in storage for almost a decade after they were deemed surplus to requirements.

Stephen Mullighan said the Government saved more than $6 million from its budgeted $15 million on the purchase because the trams had been originally built for a bulk order in 2008, as part of a 70-car order for use in Madrid by Mintra/MetroLigero.

“The State Government… has been able to negotiate an exceptional deal and value for taxpayers with the three new trams costing less than $9 million,” Mullighan said in a statement.

“The trams, stored in Madrid, have never been used in service, have been maintained to a high standard and are in as-new condition.”

But in a hearing of parliament’s Public Works Committee in August, Mullighan’s general manager of infrastructure delivery, Jon Whelan, painted a different picture.

Whelan said “there is still some work that we need to fit those trams out with”.

“When they come to Australia we still have to do some modifications to those, and that is what the remaining amount will be expended on,” he told parliament.

Under questioning from Liberal Transport spokesman David Pisoni, Whelan conceded it cost about $1.5-$2 million “per modification of a tram” – meaning the $6 million supposedly saved on the purchase price would be used up.

“The decision was made that what was best for our current system and our current network was to get the ones that are similar [to the existing fleet],” he said.

“That also helps where we have our manufacture but also our warranty and upkeep of them.

“We looked at all options to purchase trams for our network and the decision was made that it was in our best interests to maintain the existing fleet that we have and keep the same type of tram, the lower body tram, that meets all the needs of our drivers as there are no new systems for them to have to understand.”

Whelan said that “in general, most of the other trams on offer internationally are in excess of 30 years [old]”.

“So these were considered quite good value because, in conjunction with other authorities across the world, they are going for a different tram length and different tram profile,” he said.

“So it was quite a good opportunity for us to get the same ones that we have on our network now.”

Pisoni told InDaily it was “extraordinary that the Minister’s not fully aware of the full costs of the second-hand trams”.

“Or if he is, he’s chosen to select the figures which put a favourable spin on making the trams seem as though they’re a bargain… whereas they’re really about the same price as brand new trams, once you add the cost required to make them compliant for SA,” he said.

But Mullighan’s office told InDaily “modifications would be required even if new, more expensive trams were purchased”.

“We received these trams at a substantial discount and, as with previous tram purchases, there are modification works that need to be carried out to make them suitable for operation in Adelaide,” a spokeswoman said in a statement. 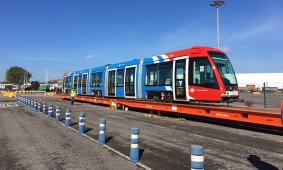 The modifications include installation of ticketing systems, compatible CCTV systems and other software, wheel profile changes and compliant seat and cab-control layout changes for drivers.

“Given we already operate six of these class of trams since 2010, [the Transport Department] has the expertise to carry out this work in-house,” the statement said.

Some of the budgeted funds will also be held in contingency “for things such as import duties that may be imposed by Australian Customs”. “Whether or not this cost is incurred depends entirely on how Australian Customs classifies this ‘import’, since trams aren’t contemplated within the existing import tariff definitions.”