Renewal SA boss John Hanlon fronted a packed meeting of East End traders and residents at the Stag Hotel last night, declaring that the Government would not let the precinct “fail” as a result of losing the state’s largest hospital to the western end of the city.

He hinted that the Government may build a pedestrian laneway – complete with lighting and “activation” – through the site of the state heritage-listed Ayers House between North Terrace and Rundle Street, in order to connect the old Royal Adelaide Hospital (oRAH) site with the East End.

Ayers House, the only surviving mansion on North Terrace, was home to five-time Premier of South Australia Sir Henry Ayers between 1855 and 1897, and now operates as a museum and function centre.

“People need to be able to come off that site [the old Royal Adelaide Hospital site] … and walk over here [to the East End] very easily – that’s the aim,” he told the city council-organised meeting.

He said the Government would have to spend money outside of the oRAH site, on top of $20 million set aside to “activate it”, including to potentially “push linkages through if we need to – especially where we own government property”.

“At this stage, because it’s government-owned land, we’re very much looking at those linkages from Ayers House on North Terrace [… to the area] behind Ayers House and pushing back into Rundle Street.

“We’ve been looking at Ayers House and those sort of areas [for] how we’re going to cross through here into Rundle Street and open those linkages up.” 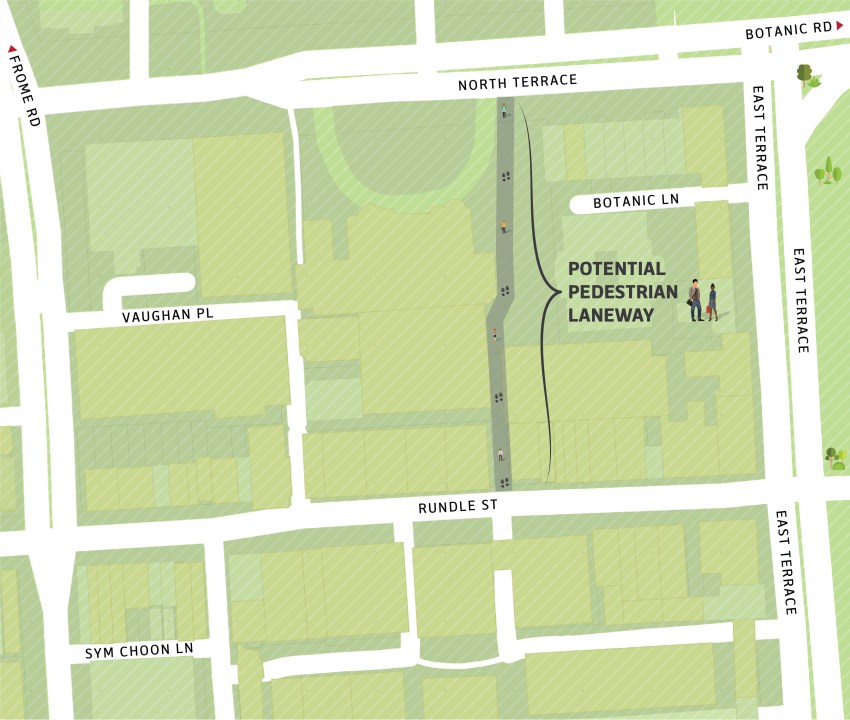 Hanlon stopped short of confirming the Government would cut a new pedestrian link through the Ayers House site, but stressed that it would need to make it very easy for pedestrians to move between North Terrace and Rundle Street.

“I don’t want to make a statement tonight that we will definitely open up this particular area,” he said.

“We’re talking to them about those crossing points … [so that the Government is] not re-creating something over there [oRAH] that takes away from here [the East End].” 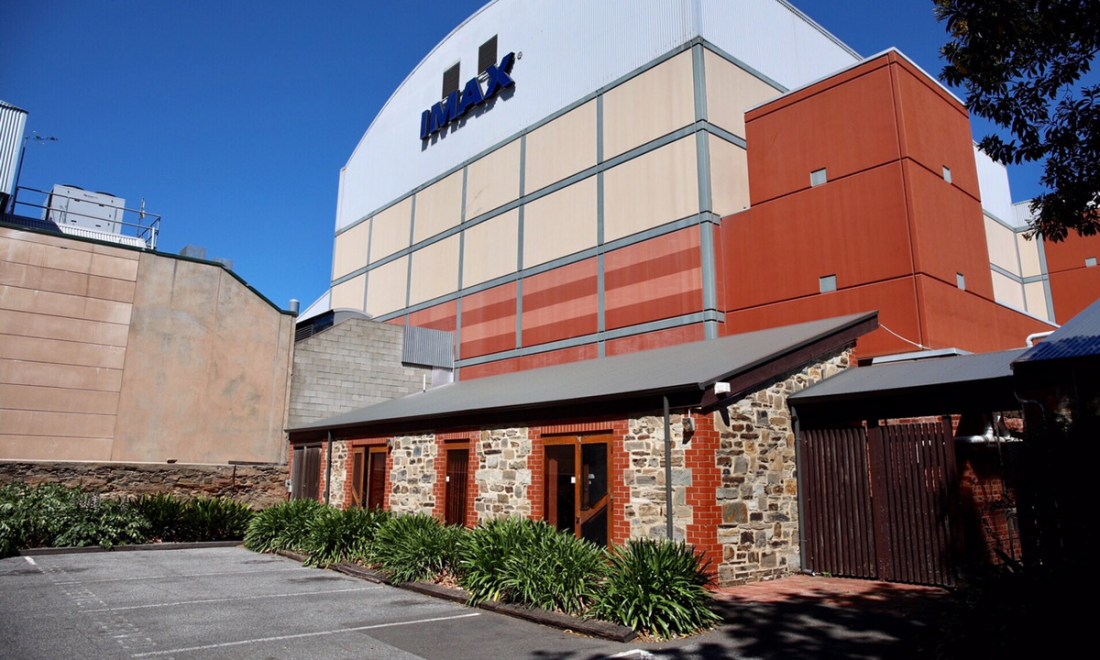 The car park at the eastern edge of Ayers House, where the Government may create a pedestrian laneway. 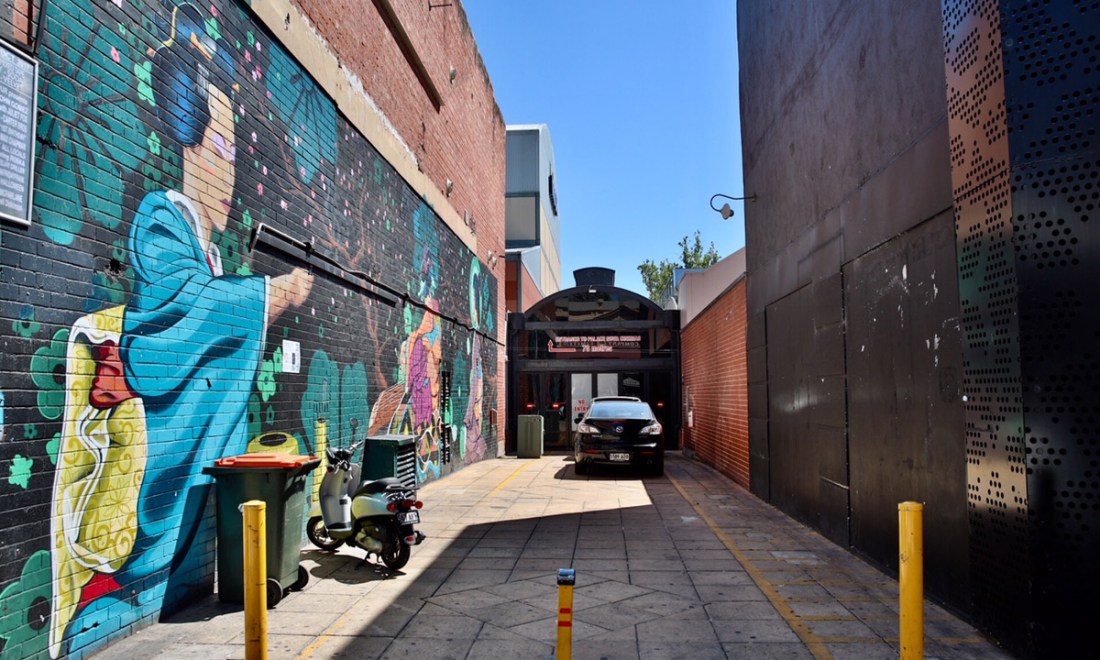 Pedestrians can currently make their way from North Terrace to Rundle Street through Paxton’s Walk and Vaughan Place – or on the footpath along East Terrace. 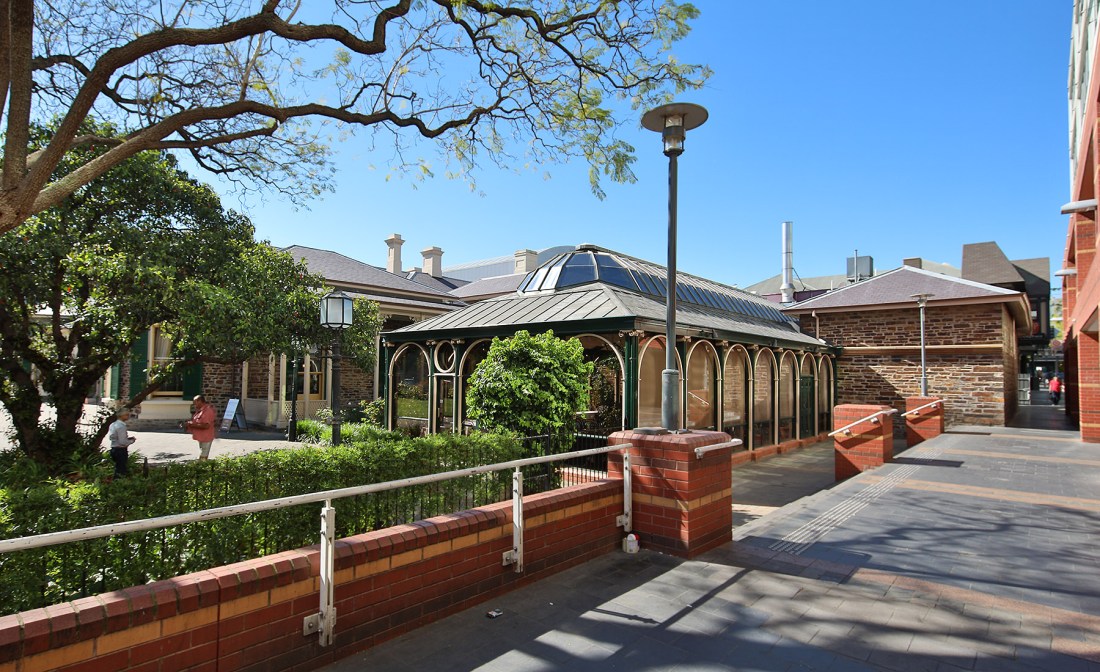 Meanwhile, Hanlon conceded that the Government was relying on decade-old economic modelling (supplemented by contemporary advice from East End businesses) for its analysis of the impact of moving thousands of staff, families and patients – potential customers – to the new Royal Adelaide Hospital at the western end of North Terrace.

Asked how worried East End businesses should be, and what modelling the Government had on the subject, he told the crowd: “You can look at it (as) how worried you need to be or you can be very positive about what’s actually happening to that (oRAH) site.”

“The Government did some modelling on the impacts when the original suggestion of the hospital being moved to the West End [was made, during Mike Rann’s premiership in 2007]” he said.

“It was showing that if you move that many people out you’re going to talk [about] a minimum of around about 20 per cent impact on the local business community – if you just pick everyone up and move them straight out.”

He said the Government was making myriad efforts to ensure thousands of people remained on the oRAH site and in the East End to support businesses there.

“We understand that – but that was what that modelling showed at that time … I have no reason to doubt that.

“And, honestly, whatever modelling I do, I can go and talk to each of these businesses and get them to tell me exactly what the problem is … and we’re going to try and help out.” 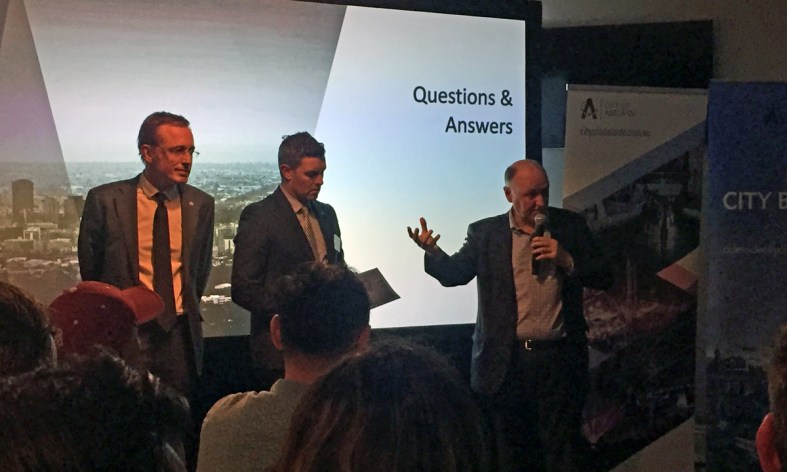 He said hundreds of SA Health staff would remain decommissioning equipment on the site until a final handover next year and that the Government intended to spend $20 million on activation for the site.

“We’re putting $20 million into activation programs, so I’m not messing around.

No one wants the East End to fail. We’re not going to let it fail.

“We are losing a few thousand people a day through moving the hospital from one end of the city to the other end.

“There is some pain, and we can’t deny that, and that’s why we’re going to offer as much assistance as we possibly can.

“It’s not good for any of us to have any organisations or any businesses go out of business.”

Hanlon stressed that millions of people visited institutions within walking distance of the East End, and that if the Government decides to go ahead with a mooted contemporary art gallery on the oRAH site, millions more would come.

“What we’re talking about is being able to double that number just through the contemporary art gallery, if that’s the decision the Government makes.

“(If) they don’t make that decision, we’re going to have to recalibrate as we go along – and we’ll be lobbying very hard for those sorts of things that are going to happen.”

“How do you guys expect traders to sustain what’s happening in the quadrant right now, and for how long?” he said.

“I own a fairly busy café […and] what it’s done to my business is, it’s probably dropped it by 35 per cent.

How do I, as a business owner, keep my viability in my business?

Haese addressed what he described as the “bear in the room”, reassuring those gathered that the Government was working with “a huge sense of urgency” to minimise business losses as a result of the hospital move, the O-Bahn redevelopment, East Terrace and Rundle Road roadworks and the North Terrace tram extension.

“Let’s be very frank – let’s address the bear in the room – we know there are traders in this room and your sales figures are down,” said Haese.

“I can assure you we are working with a huge sense of urgency across ten fronts, not just one.

“Anything we can do, we will do, to basically draw a crowd so that you can trade.”

He said the council was working on residential growth, events, traffic management and “a whole raft of things” to ensure the East End remained viable.

Haese said the council was offering funding for businesses that wanted to collaborate to host public events and invest in marketing campaigns. He added that the council and the Government had “a very strong events-based strategy to keep giving people reasons to come back to the East End”.

“We’re pulling every lever we can find and if we’ve missed a lever – tell us.”

Sam Neeft of Treadly Bike Shop told the meeting that many businesses felt East End Coordination Group was too focused on residents and did not work as well for business owners in the precinct.

“I’ve tried myself and a lot of other retailers have tried to move into the space,” said Neeft.

“It seems to be a bit more residential-based these days.

“We’re wondering if there are options to move forward with a traders’ association.”

But Haese said the close connection between traders and residents of the East End was “its great strength”.

“Whether that means [forming] some kind of committee of the East End Coordination group or something … just be a little wary about splintering,” he said.

“Stay tight, because during a time of change, staying tight is really important.

"An art form in its own right": Planning boss sells Adelaide Contemporary vision

However, the city council’s associate director of economic development and tourism Matt Grant, who emceed last night’s event, said it was “a good sign of an evolving city … when we see a business community group getting together with a common interest”.