The council last night agreed to spend $20,000 on a Chinese International Student Wellbeing Project to be run in partnership with the South Australian Health and Medical Reseach Institute’s (SAHMRI) Wellbeing and Resilience Centre.

The council will also contribute $30,000 to a “Developing Meaning and Purpose in Adelaide Residents Project”.

It comes after the council released a survey of Adelaide residents, conducted by the Wellbeing and Resilience Centre, showing 18-24-year-olds living in the city scored below the global average on every measurement of wellbeing: positive emotion, engagement, relationships, meaning, accomplishment, optimism, general health and resilience.

Single people and those who have never been married also fared more poorly than other groups on most measures of wellbeing.

However, women scored higher on most measures – especially on “relationships” – than male city residents, and people aged 65 to 74 had higher overall wellbeing than all other age groups.

Almost all demographics who responded to the survey scored below the global average on measures of “engagement” – defined as “having involvement and interest in life’s activities and tasks” and being aware and focused in the present moment.

Wellbeing and Resilience Centre project lead David Kelly told InDaily more research had to be done to understand how younger people living in the city understand concepts of wellbeing and resilience, and why international students’ experience of life in Adelaide scored poorly.

His project team will lead a promotional campaign in Adelaide’s civic centres – such as the Central Market – to highlight the importance of wellbeing, conduct further qualitative research and develop a smartphone app, which will to allow South Australians to measure their wellbeing and receive personalised advice on how to improve it.

“We need to understand what people think about meaning and purpose in their lives,” said Kelly.

“We’ll be interviewing more than 100 residents to get a really deep understanding of that.”

He said there was strong international evidence showing it is possible to teach people skills to would improve their wellbeing and resilience.

“We know that … providing people with skills is the best practical (method to help people) take responsibility and to change the way they feel,” he said.

“What we’re wanting to do is to sow the seed for people … to start thinking about meaning and purpose in their life.” 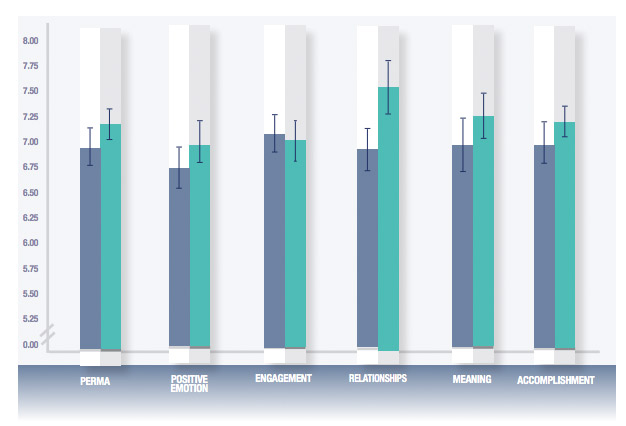 Women living in the City of Adelaide scored higher on various measures of wellbeing (overall wellbeing is labelled under the acronym “PERMA”). The blue columns represent men, and the teal women.

Wellbeing and Resilience Centre director Gabrielle Kelly told InDaily there was a tendency internationally for measures of wellbeing to improve as people age.

“We get lower scores quite often when people are younger and middle-aged,” she said

“Older people tend to have slightly higher wellbeing that the international norm.”

She added that material wealth among older people in Adelaide’s CBD went some way, but not all, towards explaining their higher levels of wellbeing, suggesting lower levels of stress and fewer burdens of responsibility contributed. 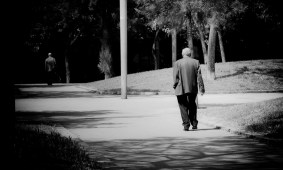 And while older people often scored higher on measures of wellbeing, people in that age group – and especially older men – were more vulnerable to feelings of isolation and the loss of meaningful relationships.

The wellbeing survey is not yet available to be taken by members of the public – though there is detailed information on the science of wellbeing at the Centre’s website.

But Kelly said there were several straightforward methods anyone can use to improve their wellbeing.

She said people should check they are getting enough physical exercise and sleep, and that they are maintaining meaningful relationships and activities that provide a sense of “purpose”.