Fourteen schools have developed experiments ranging from how plants grow in space to the stability of 3D printed plastics in space and how to shield electronics against electronic radiation.

The field for the SA Schools Space Mission will be narrowed to six at the end of October before the three winning experiments are chosen next year.

South Australian startup Neumann Space has bought 125kg of space on a year-long Airbus mission to the ISS in 2019 to test its Neumann Drive rocket.

The Department of Education and Children’s Services (DECD) has purchased 1kg of Neumann’s allowance to enable three school experiments to be conducted in space – outside the ISS.

The government primary and secondary schools have been presenting their concepts at the South Australian stand in the Adelaide Convention Centre’s exhibition hall this week.

A team of six students from the Australian Science and Mathematics School on the Flinders University campus are working on a project to grow mushrooms in space for medicinal purposes.

The project has so far included the designing of a lightweight box to house the experiment complete with sensors and a petrie dish-like container housing the red reishi (Ganoderma lucidum) mushroom spores.

Year 10 student Julia Erceg said the sensors would allow the students back on earth monitor the growth of the mushrooms and determine whether the spores can reproduce.

“We’re fairly confident, we know it’s going to grow in the design and with restricted CO2 levels,” the 15-year-old said.

“By using this experiment to investigate the principles behind the growth in space, we can potentially look at ways to grow other crops for future space exploration,” he said. 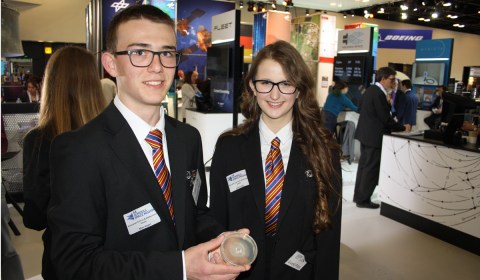 Teacher Matthew Verdon said the students would have the opportunity to work with space industry specialists on making the experiment “space ready” if they make it through to the next stage.

“I think this is something that is a lot more in people’s consciousness in South Australia. I think people are starting to see all of the different sides of space and starting to understand that, whatever field they are interested in, there’s an opportunity to look at issues, so I think it’s a really exciting catalyst to get people enthusiastic,” he said.

Mawson Lakes School has two experiments in the competition. One is to monitor the decay of bones in space with a view to using the research to help prevent astronauts developing osteoporosis after spending time in space. The other experiment submitted by the primary school is putting a mobile phone in space to analyse the magnetosphere.

John Weber has two children, Inaka and Jesse, at Mawson Lakes School, both of whom are involved with the projects.

He said simply being able to come to the congress and see the space displays on show from companies such as Boeing and Lockheed Martin was a great privilege.

“There’s not many 10 and 13 year old kids who can come and experience something like this and to be able present here has been amazing,” he said.

Mawson Lakes teacher Vira Wallis said the whole school had benefited from the program because students had been sharing their experience with other students, parents and the broader community.

“It’s an opportunity that doesn’t come very often but this has given them a chance to think of their future aspirations and develop their skills at a younger age,” she said.