As InDaily predicted this week, jittery backbenchers in crucial marginal seats have helped lay the groundwork for another health backflip, particularly with ex-Labor crossbencher Frances Bedford’s safe seat of Florey still in play.

Despite still dangling the threat of running as an independent, Bedford bizarrely hosted Premier Jay Weatherill and fledgling Health Minister Peter Malinauskas – who stepped into the breach vacated by Jack Snelling this week – in a walk-through of the hospital today, to take in the facilities.

They then held an uneasy media conference outside, at which Weatherill publicly flagged for the first time the prospect that Labor might not run a candidate against Bedford if she runs – an option several members of the party’s Right faction have privately railed against.

One of Bedford’s sticking points has been renewed investment in Modbury Hospital, including restoring the High Dependency Unit – a policy the Liberal Opposition committed to this week.

Weatherill said a new Rehabilitation Centre had doubled the number of rehabilitation patients receiving treatment this year, but conceded “there are also some concerns raised, not only by the community but also by Frances Bedford, and we’re very keen to understand that”.

“We’ll be sitting down and consulting with them… and will review the changes that have occurred at the hospital to understand the benefits but also any detriments, and recommend any improvements,” he told reporters.

“If they’re merited, there will be service changes that we make.

“I don’t feel any sense of embarrassment to change a decision on the back of listening to the community.”

Weatherill did not shy away from the political imperative, with a state election looming in March, but he denied the move was an admission of failure by the controversial Transforming Health project, key elements of which have already been wound back – or as he put it: “The modernisation of our healthcare network has undergone a range of changes”.

“If changes receive implacable opposition they become unworkable,” he noted.

“It’s a concession that we always should be listening to the community, and to local members of parliament.

But Labor’s most pressing electoral imperative is making peace with its rogue Florey MP, who quit the party after being rolled for preselection by Snelling – only for him to then announce his retirement.

Weatherill said the party was yet to re-open preselection nominations, saying that “rather depends on the decision Ms Bedford makes”.

He said she had four options – to “continue as she is, either with or without a Labor candidate running against her” or to re-join the party as its candidate – or retire, an option Bedford all-but dismissed.

“Absolutely not – I’ll never go away,” she said.

“They seem to be concerned I won’t make it over the hill.”

But having said this week if she ran at all it would be as an independent, she appeared to leave open the option of returning to the fold, saying: “Never say never in politics, do you?”

“A review is fine but a review needs to have an outcome,” she told reporters.

“So perhaps we can all get back here together in a couple of weeks.”

She said her own decision would hinge on the outcome of the review, emphasising that “the community would be better served if Modbury had more services”. 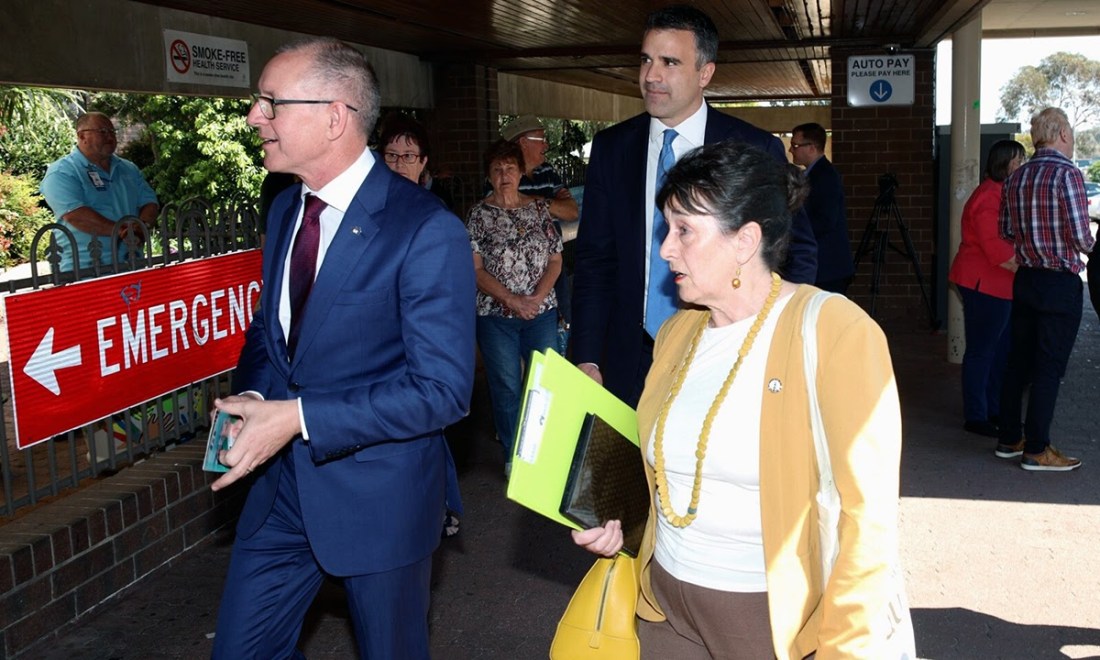 Sue Daly, a former chair of the Modbury Local Action Group that campaigned against the hospital’s privatisation by the previous Liberal administration, told InDaily: “This has been a poor relation of the SA Health system since 1995.”

She said since it came back into public hands there had been little appetite to spend money on improving the facility.

“They’ve done some cosmetic changes [but] there are huge waiting lists and it’s very clear the outpatient transfer to Lyell McEwin hasn’t worked,” she said.

“I was here last week with massive chest pains, and they said I should ring the Lyell McEwin, to be assisted by the short term heart clinic there…

“I rang up for an appointment and they couldn’t even give me a month, let along a week or a day.”

Despite the focus of Transforming Health having been on shifting major operations to key centres of excellence, Weatherill today insisted “the Government has been investing in services so people can be treated near to where they live”.

“The whole point of the changes we’ve been making to our Health system is to have a network that meets the needs of north and north-eastern suburbs,” he said.

The review is expected to take “a matter of weeks”.

Malinauskas said the initiative for the review came from the Premier.