The Premier yesterday spruiked his renewable energy credentials at a high-level roundtable in Melbourne attended by former US presidential candidate and climate change campaigner Al Gore.

Weatherill says the former Democrat vice-president has been “promoting us wherever he goes”, and argues last week’s much-publicised appearance with billionaire tech entrepreneur Elon Musk – whose company Tesla has been commissioned to build the world’s largest lithium ion battery in South Australia – has also re-energised the state’s reputation as a technological innovator.

“This represents a really powerful economic narrative for SA [with] the opportunities it gives us to spread out and make our name synonymous with cutting edge technology,” Weatherill told InDaily.

“In basic marketing terms, it puts SA on a national and international map… that’s the whole point of Investment Attraction strategies, that’s why we have overseas offices and go on trade missions – it’s a basic marketing principle.”

He said the project, and others, would also provide SA “the Intellectual Property that goes with the actual investments in renewable energy”.

“There’s a sort of service sector possibility arising out of this – that we become a service centre for that sort of property,” he said.

Weatherill contrasted Labor’s agenda with the state Liberals’ February pledge – delivered in unison with other state Liberal leaders in a co-ordinated national announcement – to scrap SA’s 50 per cent renewable energy target if elected in March next year.

Weatherill said the policy equated to “handing over energy policy to the Commonwealth”, amid a scrap over a clean energy target at today’s COAG Energy Council meeting, with SA spearheading a push for the states to go it alone.

“This is a really important and sharp difference between the two major parties leading up to the next state election,” the Premier said.

“I think this election will be a referendum on renewables… it necessarily will be whether I like it or not – it will be a natural political equation.

“We’re not uncomfortable with it, but I think it’s inevitable now the state Liberals have opened up this really substantial faultline.”

It’s understood Labor is bullish about various polls and its own research into the electorate’s enthusiasm for renewable energy, with the Premier now keen to double down on an issue he believes will play in his Government’s favour as a key point of difference – provided, of course, the planned solutions actually achieve their stated aims of grid stability and lower prices.

“That’s right, obviously this summer will be critical,” he agreed.

“Our plan is designed to put some downward pressure on prices and obviously to make sure we have stable electricity supply – we’re confident we’ll achieve that.”

But he’s been wary this week of offering guarantees.

“Obviously there are lots of elements of the plan that will all be coming together around the similar time to the election. I think what you’ll see is some obvious early signs,” he said.

The first sign, he believes, will be the effect on the ancillary costs built into the national energy market.

“We think in the medium term we’ll see those prices come down… whether we see that before the election, it’s hard to predict,” he said.

He’s also wary of guaranteeing the lights will stay on, after last year’s statewide blackout put system stability front and centre of the national debate.

“You can never rule anything out… there can be catastrophic natural disasters. But of the things we can control we’re in a much better place… we should be fine,” he said.

He said the ability to store the state’s renewable energy opened new opportunities for investment.

“We have abundant solar and wind resources but a lot of that’s curtailed at the moment because there’s no need for energy when there’s no demand for it,” he said.

“But if you can store it, the potential there is you begin to open up possibility for new solar investments and new wind investments, because you’re not essentially limited… you don’t have a saturated energy market.”

His comments effectively frame the state election as an ideological battleground which pitches his vision of the state as a “testbed” for new ideas against its unwanted reputation for the world’s highest power prices and sketchy service delivery.

“If we lose, the coal industry interests will put this in front of any other state leader – or any politician anywhere – and say ‘this is what happens when you push down deeply into renewable energy’,” he argued.

But after 16 years in Government, and a recent history putting out policy spotfires across a suite of portfolios, it is perhaps a stretch for the Premier to claim his re-election or rejection will boil down to a single issue.

“That becomes the question doesn’t it?” he noted.

“Have you run out of ideas or do you have new ones? And this is a really important new idea.” 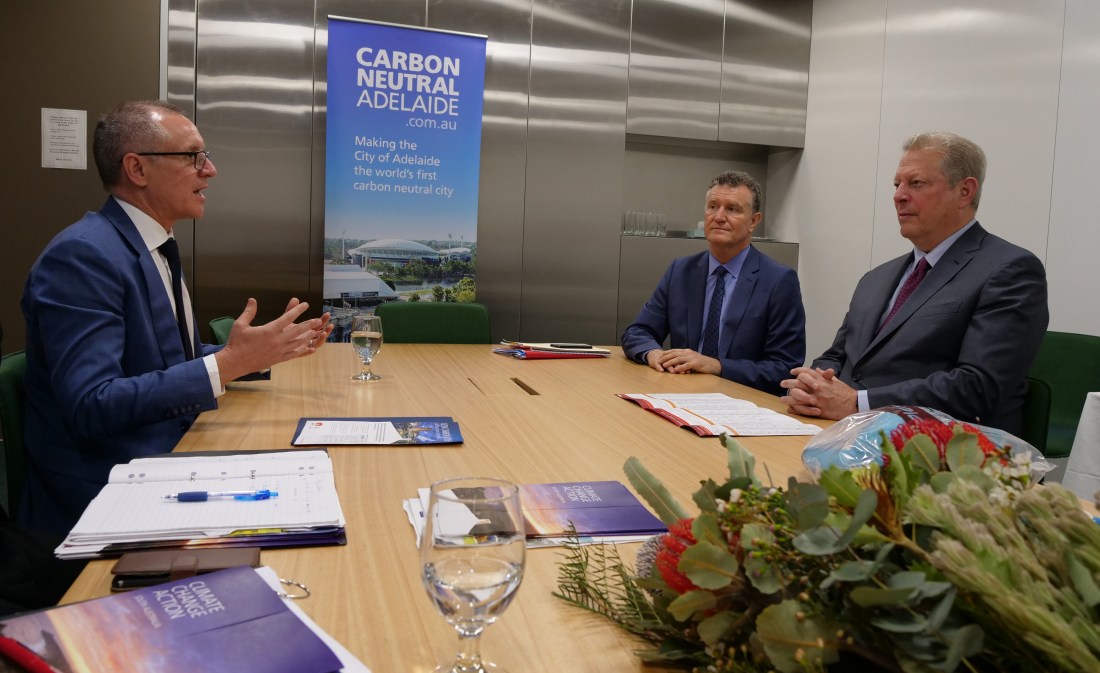 “The point of this push into renewables is becoming clearer now – the massive reputational opportunity presented through the new battery, and the leadership role we’re taking on renewable energy. 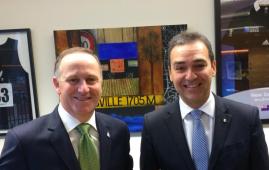 “Since we made the announcement we’re getting all sorts of contact from international companies wanting to be part of the SA renewable energy story… some quite energised by the fact the Government has been prepared to take a pretty bold leadership position.

Apparently unaware of the Premier’s meeting with Gore, the state Liberals presciently today put out a media release titled “An inconvenient truth” – the name of the former VP’s influential documentary, whose sequel he is currently promoting.

Lambasting Labor’s move to install 200 megawatts of temporary diesel generation, the Opposition lamented the need to spend “$550 million of taxpayers’ money propping up a system that delivers the world’s most expensive electricity”.