Liberal leader Steven Marshall today proposed the solution as “a temporary measure but an important measure to ensure the residents at Oakden are protected” after two new reports of alleged mistreatment in as many days.

Marshall told media the 24/7 security contingent would be “the eyes and ears of the families who can’t be there 24 hours a day, seven days a week”.

But the state’s Chief Psychiatrist, Aaron Groves, whose report last month shone a light onto the institutional chaos at the disgraced facility, told InDaily: “I don’t see security officers trying to ensure people’s safety in any way as suitable or a solution.”

“My view is that the services at Oakden have substantially improved since the beginning of my review,” he said.

“What’s important was to improve quality and safety of services, and having patients at the centre of what goes on – and not develop a blame culture.

“From my perspective, what’s needed is that clinicians should be seen as being responsible for reporting what goes on, putting them at the centre of ensuring patients’ safety… security officers wouldn’t be able to give a proper perspective about that.”

Groves suggested there had been some stridency about responses to the two new incidents, which he said showed the new mechanisms were working.

“It’s really about us having lowered the threshold for what’s acceptable, so that we’re really now back to what’s best practice,” he said.

He would not comment on the political fallout of the scandal – which has seen repeated calls for the resignation of Mental Health Minister Leesa Vlahos.

But he did note that “when services are under so much scrutiny all the time, and the people working on them feel under the spotlight constantly, it makes it very difficult to do their jobs properly”.

“It does have an impact on staff,” he said.

Groves said he was content with the Government’s response to his report thus far, despite no decision being made on his recommendation for a purpose-built facility.

“There is a need for consideration about a purpose-built facility, and that will take some time.”

Vlahos did not reject the Opposition’s suggestion outright this morning, telling ABC Radio Adelaide “what I need to do is check with the clinical lead on that site to make sure that that’s the appropriate response in this situation”.

“I think we also need to talk to family members before we make any of those decisions… everything I’m doing is based on the best interests of the residents. I’m not ruling it out but I need to take some advice from the clinical leads there today.”

However, the centre’s new clinical leader, Duncan McKellar, who also co-authored the Groves report, said in a statement: “My concern with this suggestion is that it demonstrates a lack of understanding of the aged-care sector, the nature of behavioural and psychological symptoms of dementia, and the current clinical situation at Oakden.

“I am strongly of the view that a punitive or corporal approach to this aged-care environment would be harmful.

“The suggestion to implement security staff is yet another illustration of a reactive response without adequately understanding the events that have occurred at Oakden.”

He also noted the most recent incident at the facility, which occurred on Tuesday and the Government revealed yesterday, was “an illustration of how a culture of cover-up has been replaced by a culture of reporting”.

“It illustrates our commitment of zero-tolerance of anything other than respectful, person-centred, best-practice care.

“The incident, which many would view as minor and not leading to actual harm to the care-recipient, was still viewed by our team, in consultation with the Commonwealth, as something requiring definitive action.”

Community Visitor Maurice Corcoran, whom InDaily revealed last month had repeatedly warned SA Health about the quality of care at Oakden, said the Liberal proposal was “really quite unwarranted at the moment”.

“The staff here would be the most closely monitored and scrutinised and observed and picked-up on anything at the moment, since the review report,” Corcoran told FIVEaa.

However, he similarly disparaged the Government’s latest move to “expedite” the closure of the facility with a shift of several patients to Northgate.

“There’s a lot of anxiety amongst families and staff about the pressures being placed on [them] and the political sensitivity and the politics that are playing out at the moment around trying to move people in a 20-day period, which will put enormous pressure on everyone already,” he said.

“There’s enough pressure on them at the moment trying to improve systems and processes and procedures and staffing responses.”

He said he revisited the facility last Friday and stressed opinion was divided among families of patients about the impeding shift to Northgate.

“There are some families who really are worried about this facility being closed and moving to others, where others think it’s a good opportunity to move, start afresh,” he said. 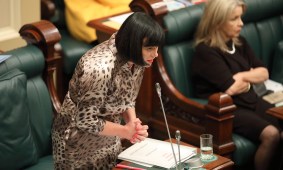 "Disgraceful": Another Oakden abuse allegation - and only yesterday

“I think there’s so much energy and resources that are going in to try and ameliorate and monitor and improve services within Oakden, [and] the people who are managing and running the service need to communicate and let people outside know about that communication strategy and what’s happening with families.”