Opposition Trade spokesman Tim Whetstone suggested the event could do little to aid the local economy, which drew a strident response from Minister Martin Hamilton-Smith, who said his counterpart had “destroyed his credibility as a potential minister for Trade and Investment”.

Port Adelaide have also responded, with CEO Keith Thomas arguing he expected the showcase to yield “a modest impact to the economic and social growth of our state”.

Speaking on the Supply Bill in Parliament yesterday, Whetstone said “if we look at our investment performance, productive investment, infrastructure investment, where are we prioritising growing the state?”

“At the moment our economy has flatlined… in actual fact, our economy is heading south,” he said.

Weatherill leaves tomorrow to join a Chinese trade mission currently being led by Hamilton-Smith; both will attend the Power’s clash with the Gold Coast Suns on Sunday at Jiangwan Stadium – the first AFL game to be played for premiership points in China.

In a statement to InDaily, Thomas insisted “we have developed a broad network of investors and business interests through our efforts to engage in China”.

“Because of our engagement they have a better understanding of – and interest in – doing business in South Australia,” he said.

“We hope our progress in China is making a modest impact to the economic and social growth of our state.”

He noted the club “appreciated the ongoing support of the State Government and its commitment to sports diplomacy”.

But Whetstone was unapologetic about his critique today, telling InDaily: “I’m concerned about the state’s economy and exports, and everyone seems to be focussed on a game of football.”

“It’s all very nice to be going over there to watch a game of football [but] I don’t see the minister’s method having any success.”

“We don’t know whether it’s going to be beneficial – but certainly hopefully it could be,” he said.

“And hopefully along the way what it will do is put SA and Australia on the map for a new audience in China,” he said.

But he was less diplomatic about Labor’s China engagement strategy, noting that SA’s share of national exports had halved since Labor took office.

“We were all very hopeful it was going to yield results [but] on any independent analysis it’s not working,” he said.

“There’s a huge amount of opportunity in that area, but it’s not doing anywhere near what it should be.”

Labor’s China engagement strategy was developed by former adviser Andrew Hunter – who was subsequently seconded by Port Adelaide to pioneer its own foray into the region.

Marshall said a Liberal Government would appoint a dedicated cabinet minister for Trade and Investment to concentrate solely on “growing our economy through exports”.

But Hamilton-Smith said that minister should not be Whetstone, who he argued had damaged SA’s relationship with China through consistent critiques.

Whetstone yesterday railed against “all the fanfare, all the gan-bei [toasts] and all the fantastic headline acts”, arguing “taking a large number of people into a room, swapping business cards and having some niceties is not going to address the [economic] situation”.

“We need to strategically target businesses in SA with importers or exporters in export destinations,” he said.

“We have to look at what our businesses are doing well, what goods and services of ours countries are wanting, such as our fantastic foods and beverages.”

Hamilton-Smith said Whetstone’s comments had “insulted the Chinese community in Australia, the Chinese Government and our partners here in Shandong [as well as] the hundreds of businesses who have come here and the workers whose livelihood depends on trade in China”.

“I think Marshall has to have a reshuffle to move Whetstone… he’s destroyed his credibility as a potential minister for Trade and Investment,” he said, noting that the Chinese Government recently established a diplomatic presence with an official consulate in SA.

“They note these [sort of] remarks and I struggle to see how [Whetstone] could ever lead a trade mission to China in light of the way he has characterised [the relationship].

“His own words will come back to haunt him.”

But Whetstone insisted: “I’m not in the business of damaging anyone’s brand, or SA’s reputation with China.”

“What I’m in the business of doing is holding the minister to account for his unaccountable spending on trade missions,” he said, adding that he had previously offered Hamilton-Smith a “bipartisan approach… and he said no”.

“The ABS stats are telling is exports are in freefall… what’s he doing about it?” he said.

Whetstone said he was “not saying” he would cancel similar trade missions if elected.

It’s understood the Power’s game – with home game rights purchased from Gold Coast for a reported $500,000 – is set to bring some “big players” to invest in SA. 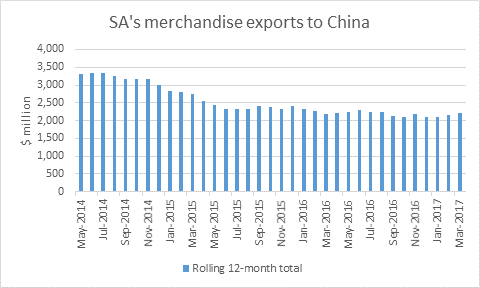 Hamilton-Smith said the club “couldn’t have timed this game better”, with the match falling just after the Government-led trade mission and just before a major food expo in Shanghai next week.

SA food and wine would be showcased at stands outside the venue, with key investors invited along for the spectacle.

“It’s going to be viewed by millions of people on live TV… as a promo for SA, you couldn’t buy this sort of coverage.”

Football pundits, including high-profile commentators Paul Roos and Wayne Carey have been vocal critics of the game, after Suns coach Rodney Eade questioned the travel logistics for his team.