Through World War I there were 627 winners of the Victoria Cross. The “VC”, the military’s highest honour, was awarded for acts of conspicuous bravery to servicemen whose ages ranged from 16 to 59 and whose ethnicity varied from Muslim to Scottish Highlander. Anyone could be awarded this medal, regardless of creed, age or status.

There were 11 South Australians among those Great War VC winners but most compiled lists exclude a twelfth – one Private John Leak. Some mystery and inconsistency surrounds his formative years. At various times he stated he was born in Canada, Australia, England and Wales and he also provided varying dates of his birth in official documents.

Assuming the most likely scenarios, he was probably born in Portsmouth, on the English Hampshire coast, on March 1, 1896, and was the son of a Welsh miner. He immigrated to Australia as a youth, possibly via Canada.

Leak initially settled in Queensland and it was in Rockhampton that he enlisted to fight on January 28, 1915. He declared himself to be 23 years old, and not 19, in his attestation papers.

He was short and light at just 167cm and 59kg. Dark-haired with thick eyebrows and handsome features, he had a reckless and impulsive streak as well as an apparent disregard for authority. He was tenacious, he was selfless and he was tough.

He embarked for Europe on the April 16, 1915, aboard the River Clyde-built transport ship Kyarra and was initially deployed on the Gallipoli peninsula. However, he took ill a number of times with enteritis and dysentery and was extracted to Limnos before being transferred twice, firstly to Malta, then on to Portsmouth, to recuperate.

After the termination of the Gallipoli campaign, Leak was deployed to the Western Front in France and on July 23, 1916, he earned his Victoria Cross as the result of an action that defined him.

A group of German bomb throwers held an elevated position at Pozières on The Somme. The German hand grenade, the Model 17 “egg grenade”, was lighter than the Australian equivalent and was therefore easy to lob down the hill and onto Leak and his comrades below. The Australians found it near impossible to return the action and were pinned down.

At this point, Leak took it upon himself to lift his featherweight figure from his ground cover and scamper, alone, towards the German positions. Chased by venomous machine-gun fire but throwing the British “Mills Bomb” like cricket balls as he ran, Leak got himself to the German positions unharmed and single-handedly took the bunker, killing three enemy troops that had survived but not fled.

After the Germans regrouped and returned to the trench to force the Australians back out, Leak took a rear position. Exposed to the enemy as the last man, he sprayed fire backward to cover his retreating mates. The Australians later retook the trench.

A few months later at Buckingham Palace, King George V said to John Leak VC: “I’m very proud of you boys from the colonies and I hope you will live long to wear the honour you have earned. Prosperity and a safe return.”

There are a number of photographs of Leak from the day the King pinned the VC on his chest. It is cold and wet and he is accompanied by a group of supporters including a young lady named Beatrice Chapman who, very discretely, holds his hand in one of the pictures (included at the top of this story). He appears uneasy in front of the camera whilst his entourage, quite oppositely, beam with pride, perhaps enjoying the accolade of mere association.

However, shortly after, Leak was returned to the frontline and was wounded by gunshot to the shoulder which invalided him out of the trenches for the remainder of 1916.

Come 1917, Leak’s discipline deteriorated. Beginning in January of that year, he was reprimanded for entering the Officer’s Mess and demanding drink. This was compounded by a defiant rejection of orders to leave by the officers present. He was then found guilty of taking absence without leave (AWL) on three separate occasions. 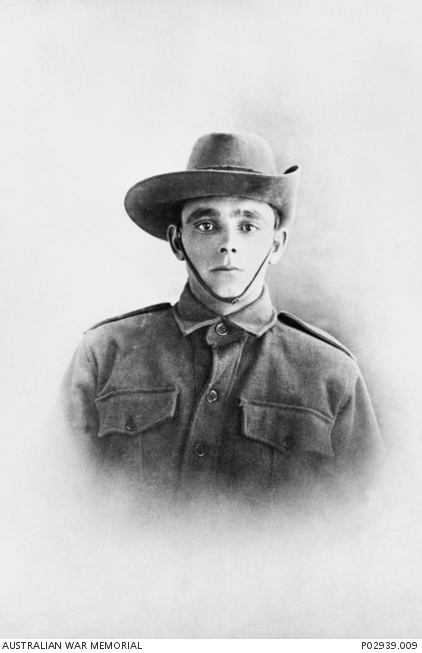 By October 1917, a recuperated Leak was posted to Belgium and offended again. This time, more seriously as his AWL was from the frontline. He faced a Field General Court Martial on November  25, 1917, for absenting himself from November 1 until 6. On December 15, the outcome was a suspended sentence.

It is important to bear in mind the gravity of this offence during this period in military history. Soldiers were being executed for these transgressions. Leak was perhaps leniently dealt with because of his VC. The very thing that almost got him killed in 1916, saved his life in 1917.

In March 1918, Leak was again wounded in action and taken from the battlefield, following a gas attack. He spent the next months in English hospitals but was well enough to again be AWL in May of that year. Further charges of insolence to commanding officers followed before he returned to France in June 1918. He survived the last few months of war but the gas poisoning was to have a lasting effect on his health.

In Cardiff, on December 30, 1918, John Leak married Beatrice Chapman, the 21-year-old Welsh girl seen in the earlier Buckingham Palace photographs. With war now ceased, he returned to Australia just six weeks after nuptials but left his new bride behind where she then disappeared from records.

In 1919, He was discharged from the army in Brisbane where he was celebrated as Queensland’s first VC winner. 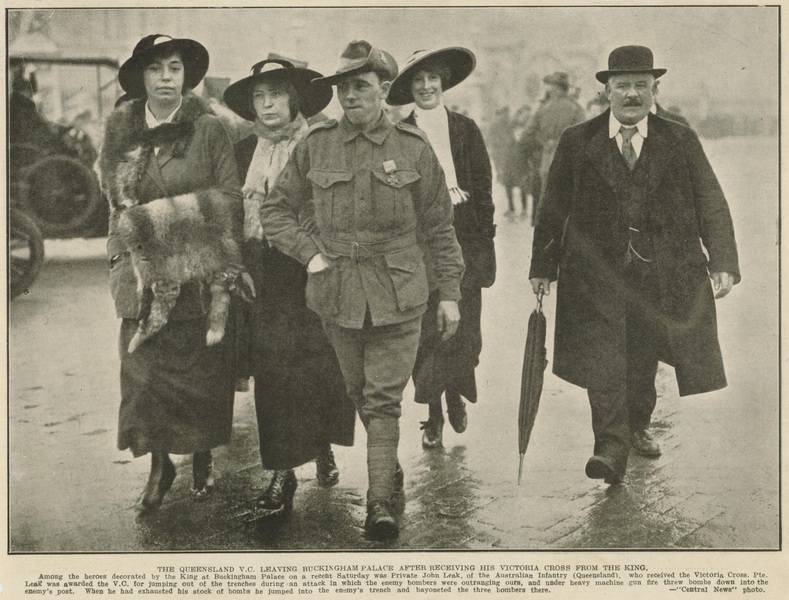 Fifty-odd years later, in a 1971 interview he said he never liked to talk about his experiences.

“Funny thing is, I don’t believe in war”, he said, adding that “I’ve never marched in an Anzac Day”.

He also described how, when he returned to Rockhampton to a hero’s welcome, he caught the first train out. He stated that he moved to Redwood Park in Adelaide’s north and lived there ever since. However, in a 2013 article in The Australian, his biographer, Tom McVeigh, mentions that Leak moved around the nation, firstly within Queensland, then to South Australia, then to Western Australia where he ran a mechanical business. It was here, in 1927, that he married again, this time to Ada Bood-Smith, under the name William Leak.

In the 1930s he returned permanently to South Australia; initially settling in the town of Verdun with Ada. They soon moved to a larger property on Waverley Ridge, Crafers, where they resided until 1966. The couple had eight children.

In 1947, the SA Housing Trust submitted street names to the West Torrens Council for a new suburb to be called Glenelg North. The proposed names were to honour South Australia’s Victoria Cross winners and among them was “Leak Avenue”. This was approved and still exists today off Tapleys Hill Road. 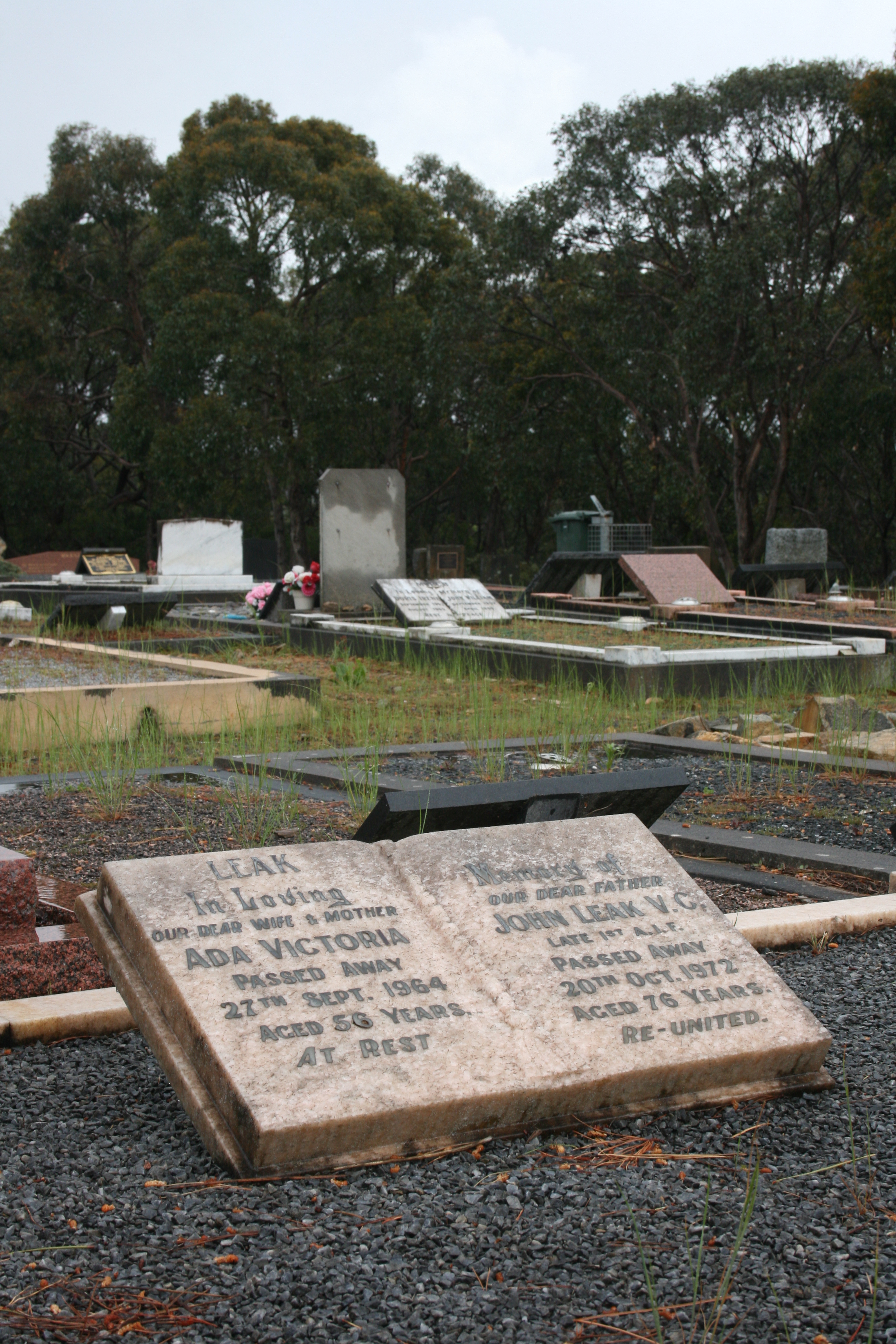 More recently, in Rockhampton, the ‘John Leak Monument’ was completed in 2012 and in Portsmouth, in 2016, a commemorative stone was unveiled as both cities made tribute to their lad.

Private John Leak VC passed away unexpectedly on October 20, 1972, in Redwood Park, Adelaide. He was buried in the Stirling Cemetery, just outside Aldgate, in the rural Adelaide Hills region where he had spent much of his life. His unremarkable grave sits in the middle of a most picturesque and peaceful cemetery.

You couldn’t get any further from the scene on The Somme over 100 years ago when he raged at the enemy. Had he stopped, at that time, to contemplate what he was about to do, he’d have surely realised that his chances of survival were pretty low.

Within 15 minutes he created a legend we remember today, a century later.

David A. Grant is a freelance writer.