The Flinders High Rate Algal Pond (HRAP) wastewater treatment system, pioneered by Flinders University’s in collaboration with the Local Government Association of SA and Loxton Waikerie District Council at the first pilot plant at Kingston-on-Murray, has been showcased at a presentation at the Bill and Melinda Gates Foundation in Seattle, US.

“Ultimately we would hope that the HRAP system will be applied in other rural communities in climates similar to South Australia, reducing the burden of disease and improving the health of people living in these communities,” says Flinders School of the Environment wastewater expert Professor Howard Fallowfield.

“The sustainable, low-energy systems are cost effective to run, and the capital cost of construction is also about 40 per cent of the previous system for effluent-only schemes, and marginally higher for blackwater schemes,” he says.
Independent reviews of the Kingston-on-Murray plant validated the method and found that its ability to remove pathogens was equal to, or better than, the existing system.

“Our system occupied about 40 per cent of the area previously required, with the smaller footprint opening up the technology to other rural communities that previously had insufficient land area,” Professor Fallowfield says.

Valuable reclaimed water could be used for irrigation of sports fields or woodlots, a bonus both environmentally and economically. 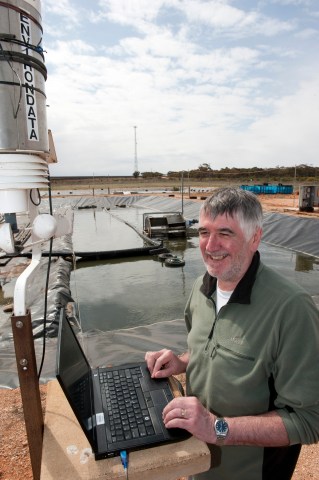 For non-sewered townships or settlements, the HRAP system slashes reclaimed water loss to evaporation while also boosting the rates of removal of bacterial and viral pathogens compared to other pond systems. It also can capitalise on solar power to cut operating costs and work off the main electricity power grid in remote and regional areas.

The US presentation, part of the Global Water Pathogen Project (GWPP), was supported by UNESCO, the Gates Foundation, Michigan State University and International Hydrological Programme, and follows a previous SA water delegation to the Rajasthan region in India.

The GWPP case studies presented in Seattle demonstrated how health-based targets can be used to manage the risk of human exposure to pathogens in contaminated wastewater, greywater or excreta.

Professor Fallowfield says the 20 case studies aim to support managers and planners in the implementation of the World Health Organisation (WHO) Sanitation Safety Planning Manual for the Safe Disposal and Use of Wastewater, Greywater and Excreta (2016).

The Kingston-on-Murray HRAP system has been validated using the Australian National Guidelines for Water Recycling: Managing Health and Environmental Risks.

Professor Fallowfield said the Flinders HRAP research would now be published on the GWPP website and subsequently available in a book published by UNESCO.