The amendments to the Emergency Management Act, flagged in the Premier’s $550 million electricity plan, will give the energy minister new powers to direct the national energy market in the likelihood of an electricity supply shortfall.

The minister would be given the ability to direct generators to switch on, as well as instruct the Australian Energy Market Operator to control flows over the interconnector.

In a short speech introducing the bill, Weatherill said the national energy market was failing South Australia and the nation, that there was a lack of national leadership on energy policy and that the bill was an essential component of the government’s energy plan.

“Our plan is designed to put South Australia first,” he told the chamber.

He said there was an “urgent need” to give the energy minister (Tom Koutsantonis) powers to direct the energy market operator and private companies in energy emergencies.

He noted that the bill also gave the minister the power to require the release of “information” from any person, in a declared energy emergency.

Weatherill said this power was needed to avoid confusion over what information can be provided to the minister in an emergency.

Deputy Opposition Leader Vickie Chapman moved that the debate be adjourned, but the motion failed.

Opposition Leader Stephen Marshall told the parliament the bill gave emergency powers to “the perpetrator” of the energy crisis.

He said members of the government had been “sitting on their hands for 15 years” on energy policy.

He said the Government had not provided the legislation to the Opposition in time before the debate, and asked if it had “something to hide”.

“If they were serious about fixing the mess that they have inflicted on the people of South Australia they would be working with us on this side of the chamber,” he said.

“But instead, all they’re interested in is playing petty politics.”

Weatherill told a press conference later this morning that the Opposition would have plenty of time in the coming days to analyse the bill.

He told reporters that the ministerial directions would need to be followed “on pain of massive fines”.

Koutsantonis said the new powers would prevent future blackouts and force generator to turn on when the state requires energy.

“We will never have idle generators … creating scarcity,” he said.

He said the Australian Energy Market Operator’s final report into last year’s statewide blackout, released this morning, was “a complete vindication of what the government’s been saying”. 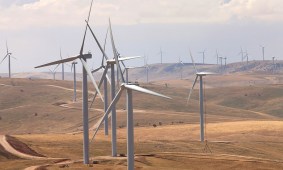 Blackout final report: Wind farm blame down to a technicality

The energy market operator’s final report into the blackout found that previously unknown technical settings in wind turbines – and not the much-criticised “intermittency” of wind power – was the key factor in the sequence of events that left the entire state in the dark.

These settings, the report says, have since been adjusted and its modelling shows that a similar event in the future – in which wild weather took down transmission lines – would not lead to another statewide blackout.

The full report is available here.