The 271-page report found that neither intermittency – the fluctuating output of wind generators – nor wind farms shutting down due to high wind speeds were “material” to the blackout, which sparked a raging national debate about renewable energy and its impact on South Australia’s energy security.

The Australian Energy Market Operator (AEMO) has found the major cause of the blackout was nine wind farms shutting down due to over-protective technical settings, which caused them to cease operating after a set number of voltage drops.

These settings, the report says, have since been adjusted and its modelling shows that a similar event in the future – in which wild weather took down transmission lines – would not lead to another statewide blackout.

“Changes made to turbine control settings shortly after the event has removed the risk of recurrence given the same number of disturbances,” the report finds.

AEMO says at the time of the blackout it was unaware that the settings existed and can’t find any international evidence of ride-through settings behaving in this way.

The findings are unlikely to end the debate about the contribution of renewable energy to Australia’s electricity crisis. On the one hand, the report finds the loss of output from wind farms was the key reason why the interconnector to Victoria tripped, blacking out the state, but, on the other, the report says the reason why they tripped was related to a control setting, not to the most commonly criticised technical characteristics of renewable power.

“All on-line wind farms successfully rode through faults, until a pre-set limit which allows a maximum number of successful ride-through events was reached or exceeded,” the report found.

“The most well-known characteristic of wind power, variation of output with wind strength (often termed ‘intermittency’), was not a material factor in the events immediately prior to the Black System.”

However, AEMO says its report does illustrate the “technical challenges” of the changing electricity generation mix in the Australia and the need for these to be managed through the market in a coordinated, national fashion.

Premier Jay Weatherill and Energy Minister Tom Koutsantonis both claimed the report as vindication for the State Government, with the Premier claiming the wind farms’ difficulties could also have happened to a gas or coal-fired generator.

Koutsantonis said the report was “a complete vindication of what the government’s been saying”.

Weatherill said renewable energy was not the cause of the blackout – “simple as that”.

The report makes 19 recommendations, three of which have already been implemented. These relate to more rigorous weather warning monitoring, and improvements in testing of the system restart ancillary services, some of which initially failed during the blackout.

The report won’t satisfy either side of the black-and-white divide over energy policy, with its findings both highlighting the challenges of integrating renewable energy in the system, and asserting that it is no longer “appropriate” to rely solely on traditional fossil-fuel generators to operate the grid.

“The generation mix now includes increased amounts of non-synchronous and inverter-connected plant (solar and wind),” the report says. “This generation has different characteristics to conventional plant, and uses active control systems, or complex software, to ride through disturbances. With less synchronous generation online, the system is experiencing more periods with low inertia and low available fault levels, so AEMO is working with industry on ways to use the capability of these new types of power generation to build resilience to extreme events.

“As the generation mix continues to change across the NEM, it is no longer appropriate to rely solely on synchronous generators to provide essential non-energy system services (such as voltage control, frequency control, inertia, and system strength). Instead, additional means of procuring these services must be considered, from non-synchronous generators (where it is technically feasible), or from network or non-network services (such as demand response and synchronous condensers).” 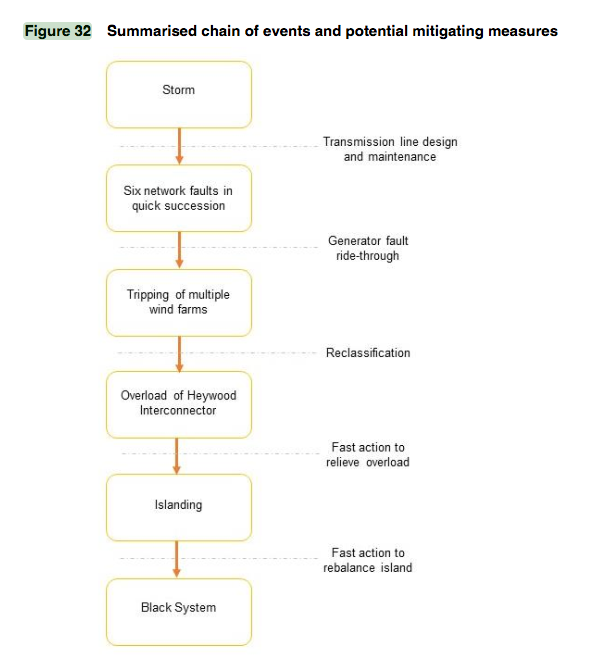 The sequence of events that led to the blackout, as reported by AEMO.

The resulting sequence of faults in quick succession resulted in six voltage dips on the SA grid over a two-minute period at around 4.16 pm.

“As the number of faults on the transmission network grew, nine wind farms in the mid-north of SA exhibited a sustained reduction in power as a protection feature activated. For eight of these wind farms, the protection settings of their wind turbines allowed them to withstand a pre-set number of voltage dips within a two-minute period. Activation of this protection feature resulted in a significant sustained power reduction for these wind farms. A sustained generation reduction of 456 megawatts (MW) occurred over a period of less than seven seconds.”

AEMO said it wasn’t aware of this protection feature because it wasn’t included in any wind simulation models it had ever received, either from SA wind farms nor internationally.

In fact, the report says there is no international evidence of this feature operating in the way it did on September 28.

“Performance with respect to fault ride-through capability is generally assessed based on recorded network fault event analysis. No previous examples of repeated fault ride-through issues with wind farms have been reported to AEMO. Additionally, AEMO is not aware of any reported instances of this phenomenon internationally.”

The report also examines in detail some of the problems with conventional energy generators, particularly those supplying Port Lincoln – which was blacked out for days, rather than the hours that affected much of the rest of the state.

Port Lincoln has three generating units able to provide back-up when the transmission line is cut, but all failed despite being tested successfully the day before the blackout.

The first two units tripped unexpectedly, the report finds, while the third had to be taken off-line due to frequency control issues.

The report says an investigation by the generators’ owner, ENGIE, found the problems with the first two units was due to storm damage – extreme rainfall, lightning strikes and high winds. The company has adjusted the third generator’s technical settings, as well as weather-proofing the transformer terminal box “to avoid future moisture ingress”.

In relation to failures in start-up generation, AEMO finds that power could have begun to be restored earlier in other parts of the state if the system had operated properly.

Back-up contracted from the Quarantine Power Station (QPS) was meant to help the Torrens Island power station re-start but it failed.

“Similar delays, for the same reason, were experienced with restoring generation at Pelican Point Power Station.”

AEMO’s investigation found that the operator of QPS, ElectraNet, had made a technical error in the way it switched a smaller generating unit to a larger one.