According to SA Health data, released to InDaily, the wait time for mental health patients in the state’s hospitals has dropped from an average of 16 hours in 2014 to 9.6 hours in 2016.

The drop in wait times bucks the long-term trend of escalating wait times in the state’s hospitals over the past decade and coincides with rising numbers of emergency mental health presentations to hospitals. 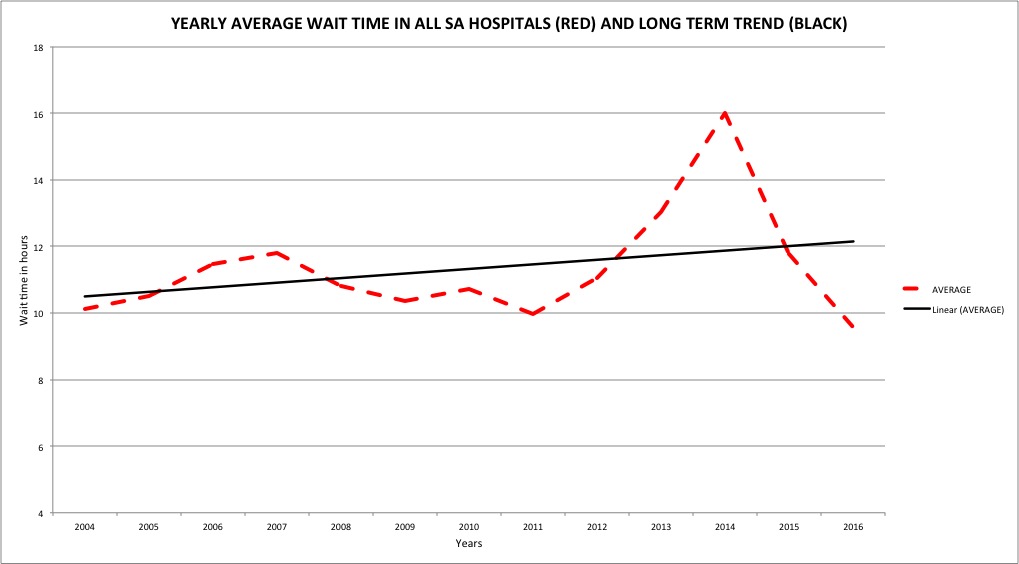 Doctors have repeatedly warned that long stays in emergency departments cause mental health patients to deteriorate, often to the point where they are chemically or physically restrained.

(South Australian mental health patients were physically or mechanically restrained almost 4000 times in 2014-15. According to the National Mental Health Commission, restraint of mental health patients is a human rights issue, has no therapeutic value, has resulted in emotional and physical harm, and “can be a sign of a system under stress”.)

SA Health attributes the sharp drop in wait times since 2014 to the introduction of new short-stay psychiatry units at several hospitals across the state and to increases in the number of dedicated mental health beds.

Mental Health Minister Leesa Vlahos said in a statement that “thanks to the hard work of our clinicians and staff, [mental health treatment] consumers are spending less time waiting for treatment in emergency departments”.

“In recent years, we’ve seen too many examples of consumers presenting to EDs and waiting too long.

“Thanks to changes we’ve implemented, we’re beginning to see people getting care sooner, giving them their best chance to get well.”

Mental Health Coalition executive director Geoff Harris told InDaily this morning that while there had been a reduction in waiting times in hospital emergency departments, many mental health patients do not receive appropriate services in hospital or in the community.

“We recognise that, by those numbers, there is a reduction in time spent in ED,” said Harris.

“This needs to be understood though in the context that we still have a high number of people who attend ED because there aren’t appropriate services for them to get the assistance they need in the community.

“It is also a reflection of how resources have been moved from step up facilities and put into short stay beds which is an undoing of great reforms of the past 10 years.”

He added that the wait times data “highlights the need for a long term mental health plan in South Australia to drive improvements across the service spectrum to better supports individuals and families impacted by mental illness in South Australia”.

Broken down year by year, and by hospital, the data shows all emergency departments suffered a spike in wait times in 2014 and a drop-off thereafter.

But individual hospitals had been trending in different directions before 2014.

At the Royal Adelaide Hospital, for example, wait times were increasing at a relatively consistent rate between 2004 and 2014.

The hospital had the highest mental health wait times in the state in 2004, and the almost equal lowest in the state by 2011. From that year wait times rose again, until 2014, after which they fell once again. 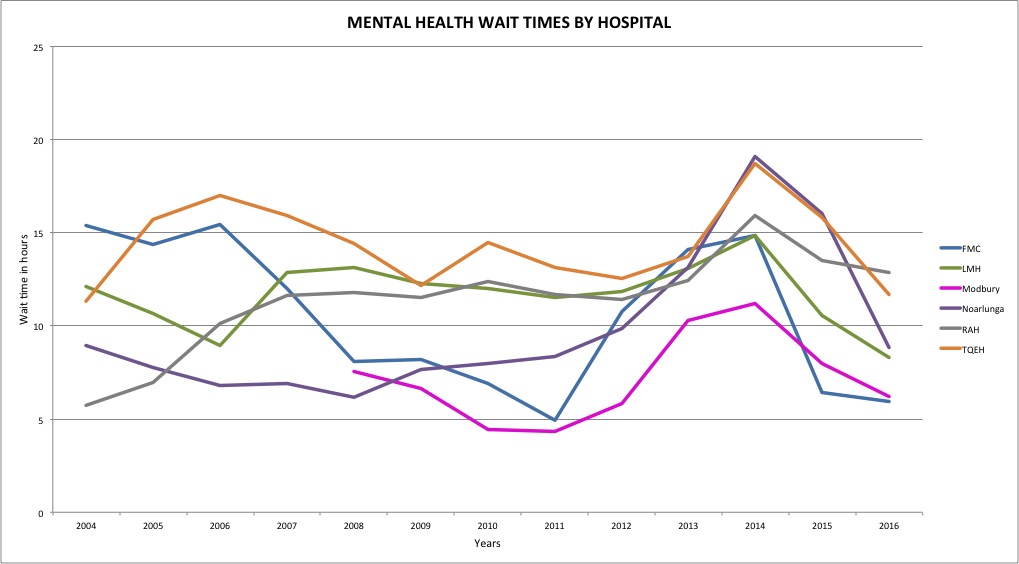 SA Health has achieved mixed results, in recent years, in its attempts to bring mental health wait times in hospital emergency departments down to acceptable levels.

The vast majority of the patients who were forced to wait more than 24 hours – 717 in total – were treated in the Central Adelaide Local Health Network, which contains the Royal Adelaide Hospital and the Queen Elizabeth Hospital.

Vlahos told InDaily earlier that year that “even one person waiting longer than 24 hours in our emergency department is unacceptable”.

“[However] I am committed to ensuring people needing to access mental health services can move from the emergency department to a bed much quicker, so they can start their care sooner,” she said.

SA Health told InDaily at the time that average wait times had nearly halved, from nearly 16 hours in late 2014 to eight hours by the end of 2015.

But the latest SA Health data shows the average wait time for mental health patients in 2015 was 11.8 hours.